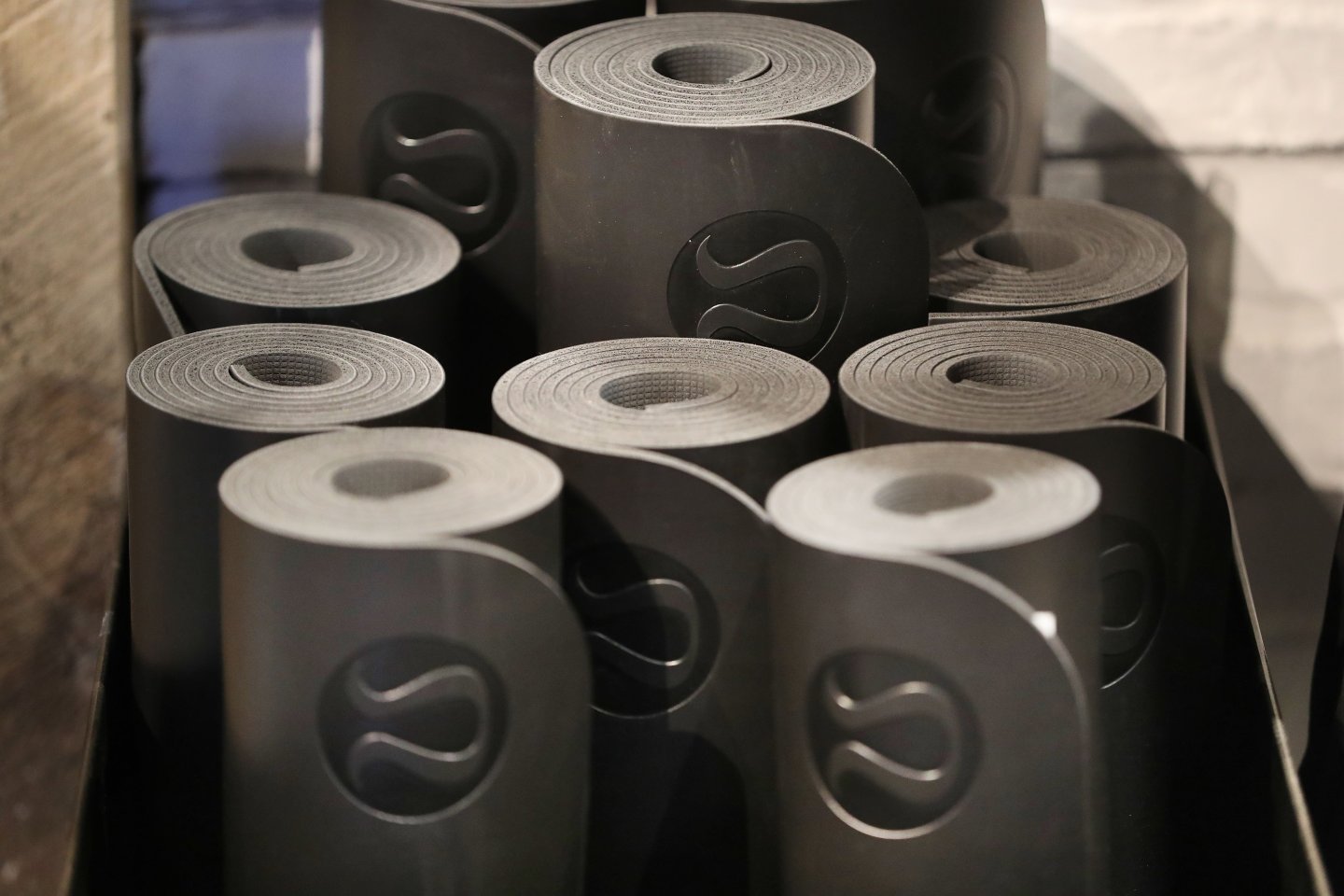 The yoga and running-gear maker on Wednesday issued disappointing financial targets for the new fiscal year, with CEO Laurent Potdevin admitting the apparel maker had gotten off to a “slow start” in 2017, mostly blaming a soft performance for the e-commerce channel because Lululemon wasn’t featuring enough bolder colors for the company’s gear. Lululemon sees fiscal 2017 revenue between $2.55 billion to $2.6 billion on per-share earnings of $2.26 to $2.36, below Wall Street’s estimates of $2.62 billion and $2.56, respectively. First-quarter financial targets were also muted.

Wall Street investors punished Lululemon’s (LULU) stock, dropping over 18% in after-hours trading. The bruising decline completely wiped out the gains the stock had enjoyed after a strong earnings report in December.

Executives told Wall Street analysts during a conference call that the issue for 2017 was related to sales conversions on the company’s e-commerce website. “We are focused on addressing, in particular, the e-commerce softness through the assortment and the visual merchandising on the site,” said Chief Financial Officer Stuart Haselden. Lululemon essentially argued that the way that the goods were presented on the website wasn’t compelling. (That’s a problem considering Lululemon just relaunched the website last year).

“We should have been bolder with the color assortment,” Potdevin admitted. “You are going to see more color showing up and we’ve added creative resources to bring visual merchandising to life in a more powerful way.”

But with Lululemon seeing a slim same-store sales increase for 2017, Lululemon’s dour forecast targets indicates the once-hot “athleisure” trend is losing luster. Athletic gear purveyors like Nike (NKE), Under Armour (UAA) and Lululemon had benefited for years from strong sales as clothing and shoes designed for fitness were increasingly worn as everyday apparel. Americans embraced wearing leggings, sneakers and moisture-wicking gear while running errands, out with friends, and even at the office. That’s helped bolster the industry at a time when many rival apparel makers and department stores have struggled.

But athletic brands are no longer outperforming the field. Under Armour spooked investors when it reported disappointing holiday sales and issued an underwhelming sales target for 2017. Nike CEO Mark Parker lamented the U.S. retail landscape has not being in a “steady state” as consumers spend more online and make fewer visits to brick-and-mortar stores. Sales in North America only increased by 3% for Nike in the latest quarter.

Nike and Under Armour partly depend on wholesale sales from goods sold at chains like Dick’s Sporting Goods (DKS) and Macy’s (M), a pocket of retail that has seen generally weak traffic trends, forcing surviving players to shutter stores and remodel to smaller locations as spending gravitates to online sellers. There have also been bankruptcies, most notably The Sports Authority.

None of Lululemon’s gear is sold by outside vendors, opting to sell only in its own stores. But Lululemon executives have also lamented weakened traffic trends. On Wednesday, the company admitted traffic remained soft at physical stores, though average sales per shopper and conversions were solid.

The poor 2017 financial targets led investors to completely ignore the strong results Lululemon delivered for the holiday quarter. Fourth-quarter revenue jumped 12% to $789.9 million with same-store sales increasing 8%. Gross margins were especially healthy as Lululemon was able to sell full-priced gear at a time when discounts were rampant. All of the major financial results for the key holiday quarter were better than expected.