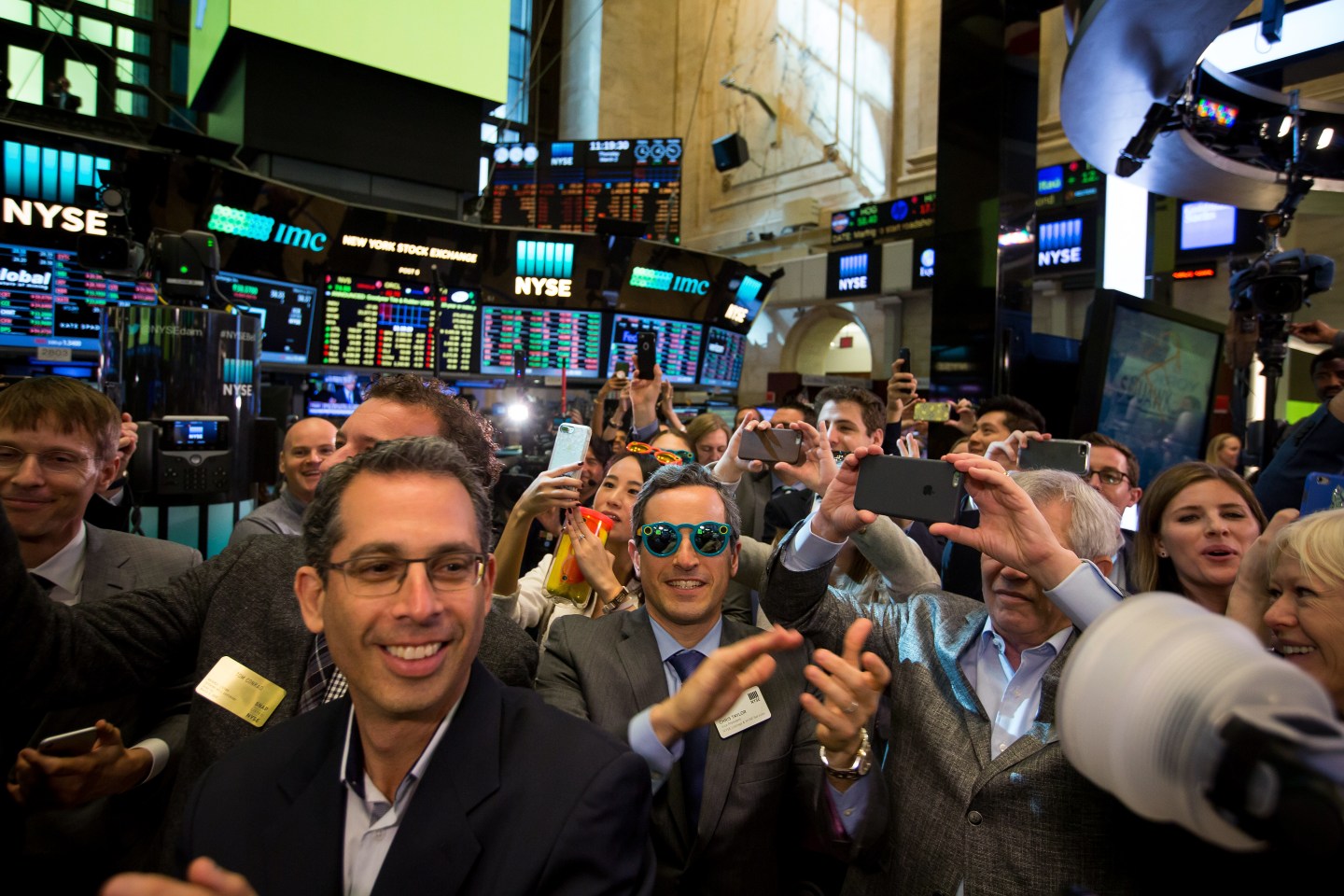 Snap has a lot of room for growth.

That’s the argument many Wall Street analysts are using to justify their “Buy” or “Hold” ratings on the social media giant that owns Snapchat. At least 13 different financial firms, which all helped sell Snap shares at its March IPO, were finally unleashed Monday, allowing their analysts to legally release their opinions and research on the stock. Unsurprisingly, the majority were “Buys,” with a few “Holds.” That also helped balance out the wave of “Sells” smaller Wall Street firms came out with immediately following the offering.

While those more bearish calls focused on the firm’s flagging user growth, nonexistent profits, and strong competitors, the Snap bulls are pointing to Snap’s currently low monetization as compared to for example Facebook, as a sign that the company has so much more to grow.

So Snap has a lot of room to play catch up.

While Snap’s numbers pale in comparison to its competitors now, bulls say its user base is loyal enough and engaged enough that advertisers will start lobbing even more of their business at Snap — and lobbing it fast.

Still, the bulls are acknowledging there are risks with betting that a still unprofitable company will prove itself three, four, and five years down the line.

Here’s a roundup of what some analysts said:

Morgan Stanley analysts, led by Brian Nowak, wrote in a Monday note that Snapchat has a lot of room for fast growth. In fact, they expect Snap’s visible advertising inventory to become 13 times larger over the next three years. The bank has a “Buy” rating and $28 target price on the stock.

Snap, the analysts said is “monetizing at only 1/50th the rate of Facebook: Second, Snap’s ad monetization is still in its infancy as, by our math, Snap’s 2016 ad load was 0.6 ads [per user every hour], vs. about 50 at core Facebook mobile, about 100 at Twitter, and about 7 at Instagram. Our base case calls for Snap to increase its ad load to about 8 ads [per user every hour] by 2020 as advertiser demand grows.”

Oppenheimer, on the other hand, gave the stock the equivalent of a “Hold.” In 2016, Snap reported a loss of $459.4 million. By 2022, Oppenheimer expects the company to have earnings (specifically earnings before interest, taxes, depreciation, and amortization) of $4.3 billion. That’s nearly six times Twitter’s 2016 EBITDA.

“We forecast $4.3 billion of adjusted EBITDA in fiscal year 2022, or 37% EBITDA margins. We believe Snap Inc. has the opportunity to create significant leverage on gross margins as cloud computing becomes less expensive and as the company gains pricing power with Discover publisher partners,” the analysts wrote. “While Snapchat is undoubtedly best suited for younger users, our proprietary survey suggests older users would join for Publisher content or if their “friends” join.”

The analysts went with a “Hold” instead of a “Buy” because of an increasingly competitive social media atmosphere, and a likely “lack of profit until 2019 as costs are tied more to engagement than revenue and it will take time for Snap to scale; and 3) Our view that even with strong revenue growth and leverage factored into our model (likely above consensus), valuation is already at a healthy premium—12x 2018 estimated revenue of $2.6 billion.”

A Stifel team gave the stock a $24 price target and a “Hold,” saying the stock would be closer to a “Buy” if only it would fall to $20.

“At current price levels however, we believe Snap’s stock appears to reflect our optimism in the company’s long-term growth prospects,” they wrote. “We would view Snap’s risk / reward as more compelling in the short term if shares were to fall to $20, or if Snap materially tops consensus forecasts when it reports first quarter 2017 results. Longer term, we believe Snap is in rare company among publicly-traded technology stocks as a over $10 billion market cap company with the potential to deliver multi-bagger returns over the next several years if the company continues to execute toward its vision.”

Perhaps the biggest Snapchat bull thus far, RBC Capital Market‘s Mark Mahaney gave the stock a $31 price target and a “Buy” rating, noting that most of Snap’s advertisers said they planned to increase spending on the platform.

“Our survey work shows a preference for Snapchat among younger Demos & engagement is high – users visit 18 plus times per day and spend 25-30 mins per day… Our Ad Age marketer survey shows rising interest, with 47% of current Snap advertisers planning to boost spend vs. only 8% decrease,” Mahaney’s team of analysts wrote.

Goldman Sachs analysts gave the stock a “Buy” rating, and price target of $27, saying that Snapchat’s highly engaged user base will be a huge draw for advertisers. But the question still remains, can the company beat its competitors, and break into international markets? If not, the company could hit a growth cap.

Snap faces “faces significant competition from platforms like Google and Facebook that are considerably larger, more profitable and better resourced,” the Goldman analysts wrote. “We see material risk to execution as the company expands internationally, and ramps up its sales force and engineering efforts.”