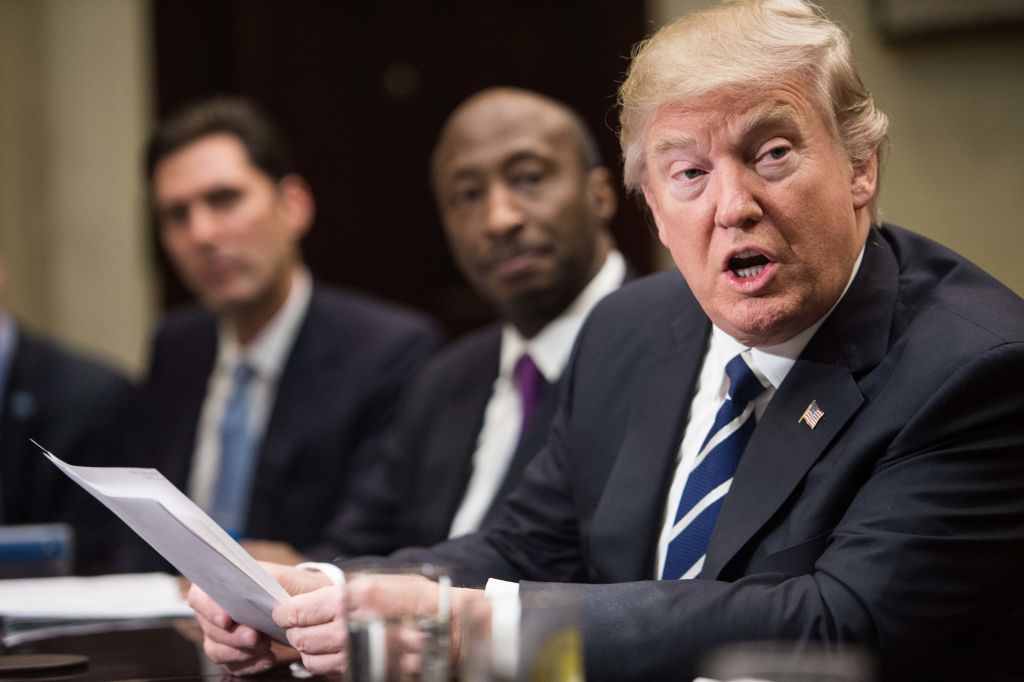 CORRECTION - US President Donald Trump meets with leaders of the pharmaceutical industry in the Roosevelt Room at the White House in Washington, DC, on January 31, 2017. / AFP / NICHOLAS KAMM / The erroneous mention[s] appearing in the metadata of this photo by NICHOLAS KAMM has been modified in AFP systems in the following manner: [in the Roosevelt Room] instead of [in the Oval Office]. Please immediately remove the erroneous mention[s] from all your online services and delete it (them) from your servers. If you have been authorized by AFP to distribute it (them) to third parties, please ensure that the same actions are carried out by them. Failure to promptly comply with these instructions will entail liability on your part for any continued or post notification usage. Therefore we thank you very much for all your attention and prompt action. We are sorry for the inconvenience this notification may cause and remain at your disposal for any further information you may require. (Photo credit should read NICHOLAS KAMM/AFP/Getty Images)
Photograph by Nicholas Kamm—AFP/Getty Images

President Donald Trump plans to meet with a group of infrastructure business leaders at the White House on Wednesday, a person briefed on the meeting said.

During his presidential campaign, Trump said he would push for a $1 trillion infrastructure program to rebuild roads, bridges, airports and other public works projects.

The lunch meeting is set to include real estate, management consulting, private equity and other business leaders, along with at least one environmental group, a person briefed on the matter said.

Last month, Trump touted the plan in an address to Congress.

“The time has come for a new program of national rebuilding,” Trump said.

“To launch our national rebuilding, I will be asking Congress to approve legislation that produces a $1 trillion investment in infrastructure of the United States – financed through both public and private capital – creating millions of new jobs.”

The American Society of Civil Engineers has graded U.S. infrastructure at D+ and estimated the country needs to invest $3.6 trillion by 2020.

U.S. Transportation Secretary Elaine Chao told Fox News last month that the needs for infrastructure are so great the federal government cannot shoulder all the costs.

“Public private partnerships are a very important part of a new way of financing our roads and bridges that are in disrepair and our very dangerous,” Chao said.