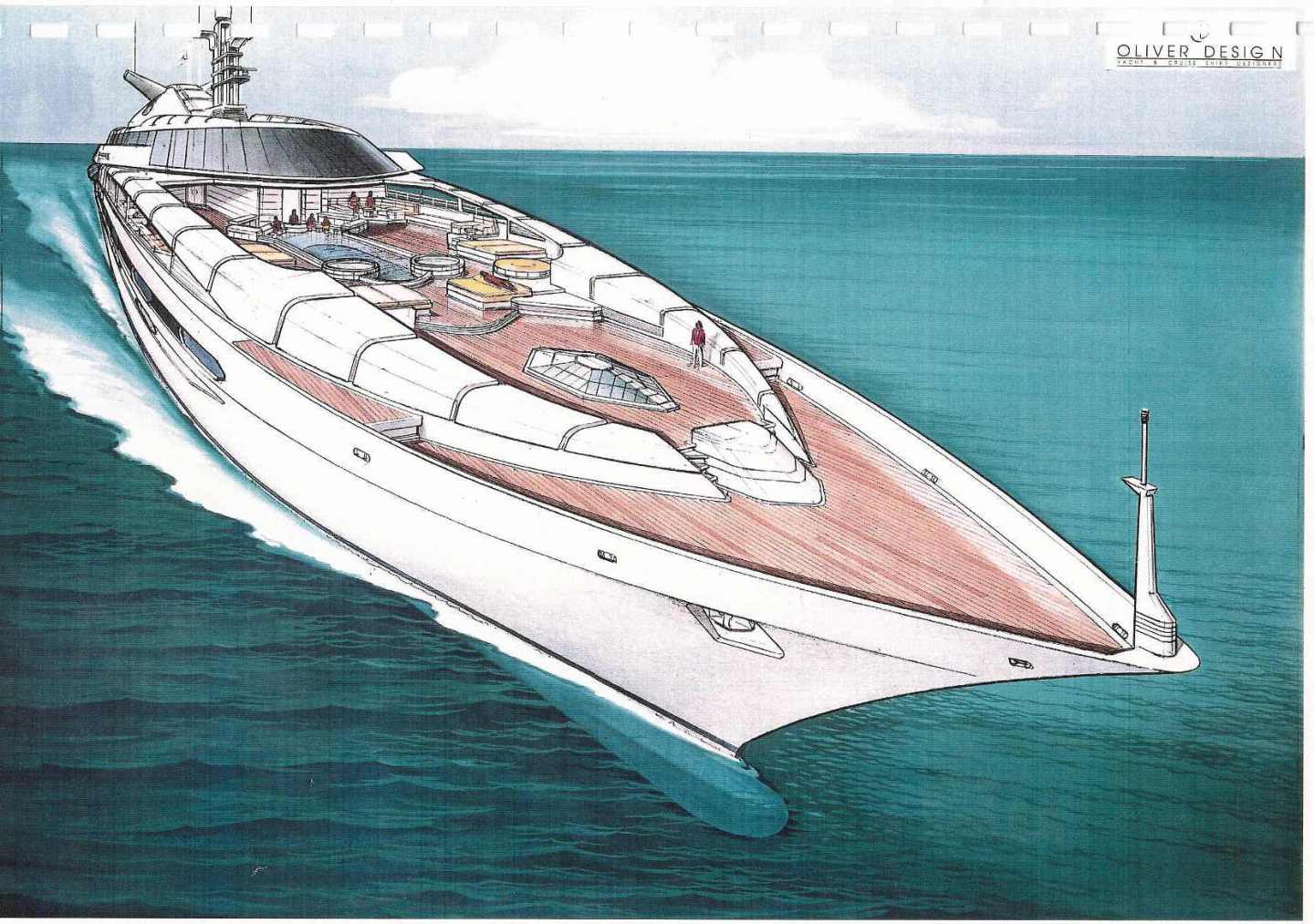 Four decks, a helipad, lounges, a swimming pool, and a gallery stuffed full of palm trees, all adding up to “the most beautiful yacht in the world.”

Those are the marching orders that Oliver Design, a firm of Spanish ship designers, got from the future 45th President of the United States back in the 1990s.

According to The Times of London, the real estate tycoon set his heart on what he intended to dub “Trump Princess” after seeing designs for it at the Florida boat show in 1993.

“I am interested in building a 420[ft] yacht which, when completed, will not only be the largest yacht in the world, but at the same time, the most beautiful,” Trump reportedly wrote to Oliver in March 1993. The yacht design which you presented to me is very beautiful and indeed, I believe if built, would be a great tribute to everybody involved in the project, including your country, Spain.”

Trump bought his first “Trump Princess” in the 1980s from the Sultan of Brunei and then commissioned a second, larger “Trump Princess” from a from a Dutch-based shipyard, Amels, that ran into financial trouble. In 1991, Trump hit his own financial woes as his Taj Mahal casino floundered and he sold “Trump Princess” No. 1 to Saudi Arabia’s Prince Al-Waleed. According to the New York Times, a ‘Trump Princess’ yacht was among the assets taken by his creditor banks as part of a wider restructuring of debts on his casinos in 1992. In the same year, Trump was forced to sell a 49% stake in the Plaza Hotel to his creditor banks, in a deal that slashed the value of the book value of his holding from $830 million to around $130 million.

The then-real estate tycoon pulled the plug on the project after paying $170,000 to the firm to flesh out the design. The boat designers are now lovingly re-telling the story of their relationship with the future President, having realised that the sketches they sat on for 24 years still have some marketing value.

“On a number of occasions, (Jaime and Inigo Oliver) visited the billionaire in his office at Trump Tower, the imposing New York skyscraper that symbolised his financial might,” according to a press release from the company. “Inigo was also invited to stay at Donald Trump’s mansion at Mar-a-Lago in Palm Beach (Florida), where he dined with the Trumps and watched movies in their private cinema. He even attended the baptism of one of Trump’s daughters, Tiffany.”

The Times quoted Inigo Oliver, now the firm’s sales manager, as saying that “It was a great opportunity and a big challenge for us at the time. He knew what he wanted and paid for the complete design contract. But due to economic problems he was going through on his business it had to be abandoned.”

Of course, the market for super-yachts design has moved on considerably since these episodes, with emerging market tycoons in particular setting the new standard for over-the-top luxury. Oliver’s putative ‘Trump Princess II’ would be dwarfed by today’s record holder, the 590-foot, $600 million Azzam owned by Sheikh Khalifa bin Zayed of Abu Dhabi.

At least they’ll always have Mar-a-Lago.