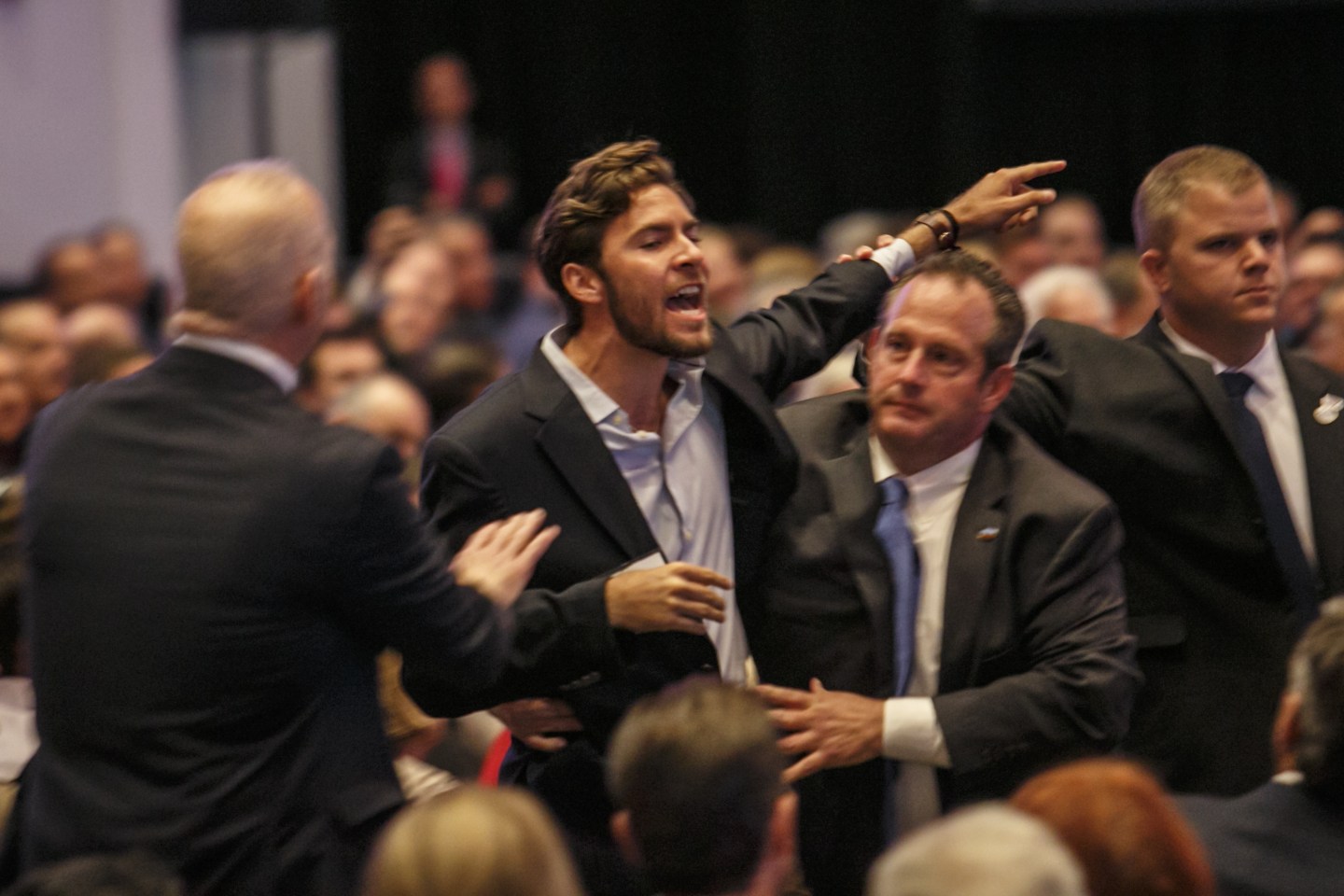 A protester is escorted from the room during an event for Donald Trump, 2016 Republican presidential nominee, not pictured, to discuss his economic plans at the Detroit Economic Club in Detroit, Michigan, U.S., on Monday, Aug. 8, 2016. Trump is promising the biggest overhaul to the personal income-tax code since Ronald Reagan, as well as a deep cut in the corporate tax rate. He's also pledging to end excessive regulation and lift restrictions on the nation's energy producers. Photographer: Sean Proctor/Bloomberg via Getty Images
Photograph by Sean Proctor—Bloomberg via Getty Images

There is, for good reason, a lot of attention on the size and shape of tax cuts that the Trump administration and Republicans in Congress will pursue this year. But those tax cuts threaten to exacerbate a pre-existing condition: The impact of on the federal budget of the retirement of the baby boomers, the generation born between 1946 and 1964.

For many years, economists have been warning about the impact on the federal budget of the coming retirement of the baby boomers. Those changes are now beginning to materialize. According to the Congressional Budget Office (CBO), the population 65 and older will increase 34% over the next decade, while the working-age population will increase just 2%.

Because the federal government spends much more on the elderly than on others, that demographic change will put pressure on the federal budget. Indeed, in its latest projections, CBO shows the deficit climbing fairly steadily over the next decade — from 2.9% of GDP this year to 5% by 2027. Increased spending on Social Security and Medicare because of that growing elderly population accounts for most, if not all, of that increase, as seniors start to collect their entitlements. Put another way, CBO estimates that without changes in policy, Social Security and Medicare will account for 63% of the projected increase in federal non-interest spending over the next decade.

These effects are not temporary—this is not a one-time event that policy can smooth out absent major adjustments. Instead, as shown below, the retirement of the baby boom generation marks the transition of our society from a younger one to a significantly older one. That means that without changes, deficits will continue to grow and the federal debt, already at near-historic levels at 75% of GDP, will continue to climb. And these CBO projections are under current law—they don’t include any of the tax cuts that are widely expected to be enacted during the Trump Administration, which would only make our fiscal problems worse.

Something’s got to give. Although there is little certainty and much disagreement about how long we can keep running deficits without entering into dangerous territory, virtually every economist would agree that we can’t continue indefinitely. But how we adjust our budget matters at least as much as when we adjust it, for two reasons.

First, some government spending should be viewed as an investment that will boost the economy years from now. Cutting useful investment—whether it is spending on roads and bridges, research and development, or education, doesn’t help us adjust to an older population. To help us provide for our elderly, our reforms need to increase future output, not lower it.

We also need to think more broadly about what constitutes an investment. There is mounting and dramatic evidence that programs that help poor kids—including the Earned Income Tax Credit, Medicaid, Food Stamps, and housing assistance—have economically significant impacts on their outcomes as adults, improving their educational attainment, health, and earnings, among other outcomes. This not only helps them, but it also helps future budgets by raising tax revenues and reducing spending on health care, income support programs, and more. Investing in our children may be one of the best ways to help secure solvency in the future, a lesson that President Trump and congressional Republicans need to learn soon.

Second, we need to remember that the government budget is more than dollars and cents. It is a reflection of our values and a means for carrying out national priorities. Cutting the budget mindlessly—for example, by cutting programs or freezing federal hiring across the board—is a guaranteed way to decrease the efficiency of government. More importantly, cutting the budget without adhering to our values—without trying to ensure that our prosperity is widely shared and that all Americans have equal opportunities, for example—shouldn’t be viewed as a victory.

Of course, people have different priorities and values, so figuring out which ones should prevail is a political matter. Tools like the Fiscal Ship, an online game from the Hutchins Center at Brookings, help people understand the economic impact of various policies and figure out just what tradeoffs they are willing to make. A well-informed public can advocate for choices that ensure long-run fiscal sustainability without betraying the values they hold dear.

Louise Sheiner is a senior fellow in Economic Studies at the Brookings Institution. She is also policy director of the Hutchins Center on Fiscal and Monetary Policy at Brookings.