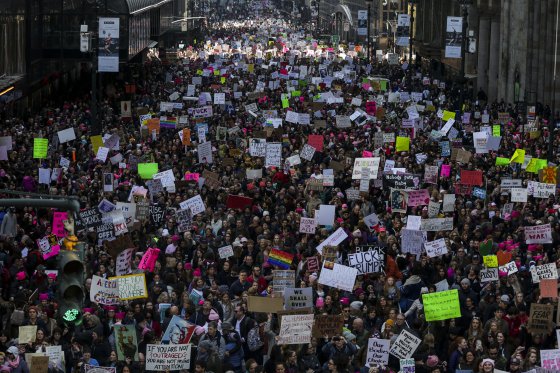 Demonstrators hold signs and march towards Trump Tower during the Women's March in New York, U.S., on Saturday, Jan. 21, 2017. Hundreds of demonstrations around the world are planned in conjunction with the Womens March on Washington, which is expected to be the largest inauguration-related demonstration in United States history. Photographer: Jeenah Moon/Bloomberg via Getty Images
Bloomberg Bloomberg via Getty Images

Here’s a tidbit that may raise some ire in the White House: Saturday’s Women’s March events may have drawn more than one in 100 of all Americans, according to academics from the University of Connecticut and University of Denver.

For raw numbers, researchers relied on official counts by local police, other city or state officials, and the march organizers themselves at each location. For some of the smaller marches, the two researchers handcounted the tallies from photos and video, Pressman explains to Fortune. (Disclaimer: Pressman is also the brother of Fortune senior writer Aaron Pressman.)

Given the uproar this weekend about the relative number of attendees at the inauguration of President Donald Trump and the Women’s March on Washington the following day, these figures will undoubtedly draw controversy.

Since march organizers may want to maximize attendance estimates, their figures should be taken with a grain of salt, Pressman concedes. Still, the photographic and video evidence of the march crowds is compelling.

Pressman says what struck him most was not necessarily the size of the crowds in Washington D.C. (which had a top line estimate of 1 million people), Los Angeles, New York, Chicago, or Boston—but the fact that marches happened seemingly everywhere.

“Obviously in terms of quantity, the big numbers come from New York, Washington, Los Angeles, Boston, and Chicago. But it seems like every state had events, in some case for tens or dozens of people,” Pressman says. “I was contacted by many people in Montana who want you to know that there was a march in Helena, and there were about 10,000 people there.”

For more on the inauguration, watch:

He also notes that some retirement communities staged their own events for people who may not have been able to travel to a larger march venue.

As noted, the spreadsheet includes estimates for about 500 U.S. cities from Hilo, Hawaii to Amelia Island, Fla, but also for a few dozen international sites, spanning from the U.K.’s Isle of Eigg to Nairobi to Seoul.