The Real Reasons China Is Struggling To Control Its Pollution Problems 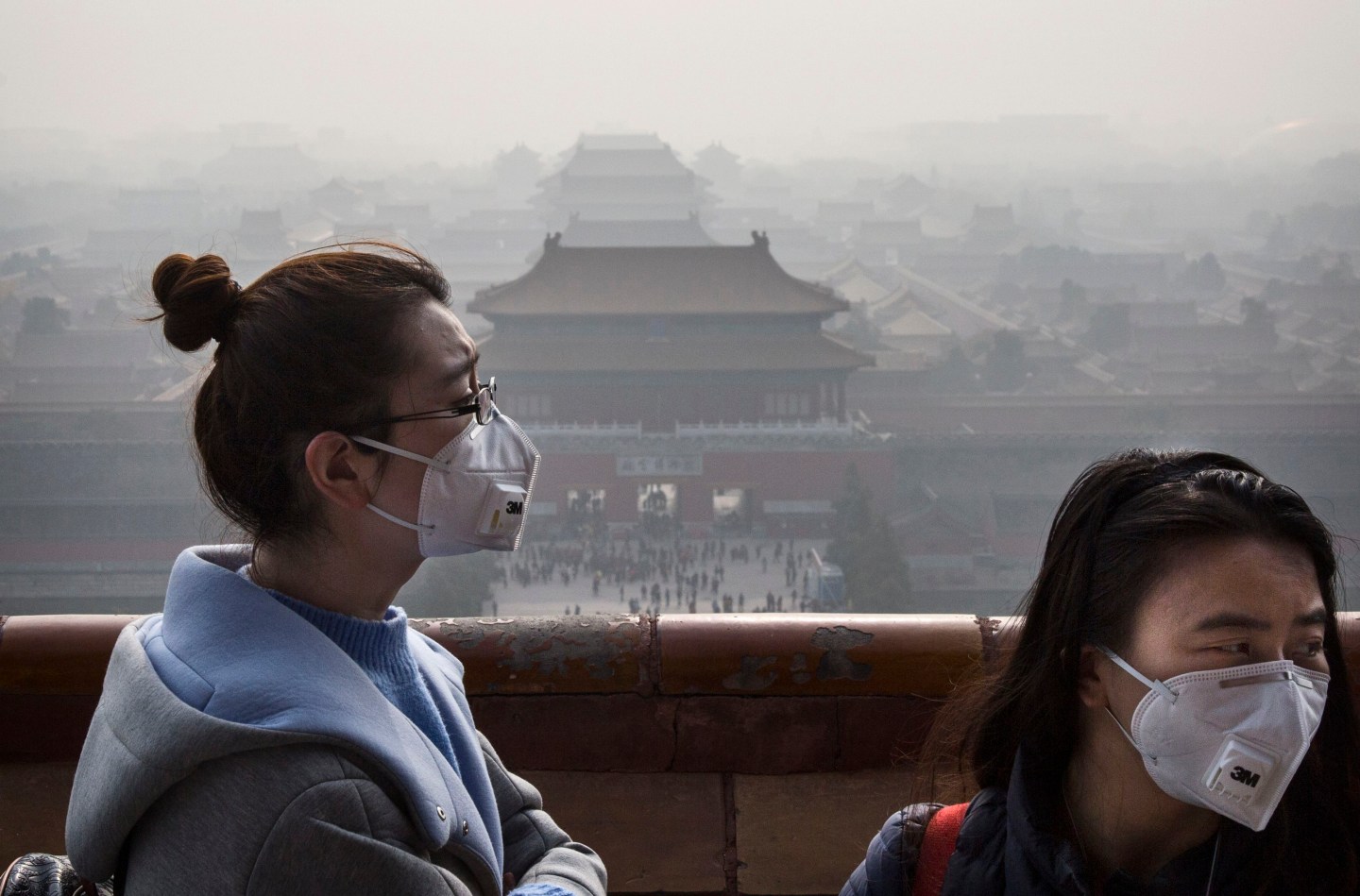 China’s problems with severe air pollution are back in the news. Last week, smog levels in China reached historic levels; as many as 32 cities were under “red alert,” the country’s most severe pollution warning. This followed two other red alerts in Beijing in December, which resulted in closures of schools and factories; half of the capital’s cars were banned from roads.

The persistence of China’s air pollution may puzzle some, given the country’s campaign to curb pollution in recent years. In 2013, a new English word, “airpocalypse,” emerged after severe smog in Beijing prompted the government to enact a massive national air pollution control plan amid public anxiety. “PM2.5,” a term for fine particulates, also entered the public lexicon as citizens monitored the daily reports of pollution levels.

Indeed, China has had substantial successes in reducing pollution emissions since 2011, even as its economy has grown more than 7% per year and coal use has stabilized. For example, total sulfur dioxide (SO2) emissions from all sources (mainly industrial and residential coal combustion) fell from 21.9 million tons in 2010 to 19.7 million in 2014, continuing a downward trend from 25.9 million in 2006 initiated by mandated desulfurization of emissions from electric power plants. Total emissions of nitrogen oxides (NOX), chiefly from the same coal-burning sources as well as fuel use by vehicles, fell from 24 million tons in 2011 to 20.8 million in 2014. These two gases form sulfate and nitrate particles in the atmosphere, key components of PM2.5. On average, national pollution levels have been stable or falling as a result. In Beijing, the annual average PM2.5 level was 73 micrograms per cubic meter in 2016, down 9.9% from 2015 and 18% from 2013.

If China’s government has acted aggressively and average levels have improved, why then do Beijing and other cities continue to experience red-alert pollution events? What more can the government do to reduce them?

The answer to the first question begins with the fact that China’s air pollution is influenced by a wide variety of physical and chemical factors; the problems are a lot more complex than most realize. One should first differentiate severe air pollution episodes and annual average pollution levels, although the former contributes to the latter. Annual average pollution levels can decline in spite of occasional red-alert spikes, as long as levels fall sufficiently over the rest of the year. A pollution episode is a short-term event, generally initiated by unusual meteorological conditions—such as low wind speeds—that are themselves transient and may affect chemical processes in the atmosphere that contribute to the spike.

Smog—chiefly PM2.5 and ozone—in a given location results not only from “primary” pollutants, meaning those emitted directly from fossil fuels and other sources, including SO2, NOX, and some forms of PM2.5. It also results from chemical reactions of these and other pollutants in the air, creating new “secondary” pollutants, including sulfate and nitrate particles.

Complicating things further, this chemistry is influenced by meteorology, not just wind speeds but also relative humidity, cloudiness, temperature inversions, and more. The complex chemical and physical pathways unique to each region are challenging for scientists to untangle, let alone for policy makers to address. PM2.5 control progresses incrementally in all countries, taking decades to build the requisite scientific understanding and to develop and enforce effective policies, as the problems themselves evolve due to changes in the underlying economy.

As an example of how the chemical complexity can confound hard-won efforts at pollution control, research by our collaborators in atmospheric chemistry suggests that China’s successful reduction of SO2 emissions may have had no effect on fine particles overall in North China. This is because the reduced SO2 may simply free another pollutant, ammonia, to react instead with abundant NOX creating ammonium nitrate particles.

As to what more the government can do, the example above shows that greater efforts may be needed to reduce emissions of NOX and also non-combustion pollutants, including ammonia. Beijing is making progress in reducing NOX from coal-fired plants, which is relatively straightforward if costly, but it is more difficult to do so from the transportation sector as more people drive. There are 6 million vehicles in Beijing today spewing fumes while crawling along congested roads. The transit system is expanding, but it will take many years of innovative policy to get more people in the city and surrounding areas to leave their cars or switch to electric vehicles.

What’s more, ammonia is rarely even recognized as an air pollutant because it results not from combustion but livestock farming and fertilizer use, and its control would require new types of policies developed with the Ministry of Agriculture.

China of course can address local air pollution and climate change by shifting to non-fossil energy sources. The government’s efforts to expand renewables are now well known: in less than 10 years it built the world’s largest wind power capacity, and continues to expand it. China is also nearly tripling its hydropower capacity; it now dominates the world market in photovoltaic cell production and has just become the world’s largest generator of solar power. Last week, China’s National Energy Administration announced investment of another $361 billion into renewable power generation by 2020. However, given the large base of coal-fired electricity and growing transport sector, these ambitious plans will only raise the non-fossil fuel share of total energy consumption to 20% by 2030 from 12.5% in 2014. Achieving this goal will not only be expensive but also involves difficult technical challenges of integrating inherently variable wind and solar power into an inflexible coal-dominated system.

These technical challenges are compounded by political ones that arise from decentralized decision-making in China and the bureaucratic power of state-owned industries. A prime example is a glut of more than 100 new coal-fired power plants now approved for construction by local governments, despite falling utilization rates at existing plants, and growing non-fossil generating capacities. Given 40-year lifetimes of new plants, this failure of the central government to control local decision-making may further entrench resistance to a shift to renewables for decades into the future. This resembles the excess capacity in the steel-making industry: iron and steel enterprises, which are mostly state-owned, are willing to sell and export at low prices to maintain employment, and are resisting efforts to curtail production. The ability to reduce pollution emissions thus depends crucially on the ability of the political system to find alternative sources of economic development and provide a financial path for coal-fired industrial enterprises and power plants to close or reduce output.

In the case of Beijing, the political challenges are profound. The city is surrounded by Hebei, a poor province with a large industrial sector fueled by coal. Its emissions are major sources of pollution in the capital, but Hebei’s government has little alternative to maintaining employment in these industries. Untangling this knot will require imaginative reform and transfer policies.

The complex science noted above also indicates that efforts must be redoubled to build knowledge on the chemical and physical processes driving air pollution in each region. The government is attempting to do so by underwriting domestic research and encouraging partnerships with scientists abroad. China may still be decades away from the air pollution levels of western countries, but it is telling that its government recognizes it must invest heavily in scientific advance for the future as it also grapples with the challenges and tensions of protecting the environmental well-being of its citizens today.

Chris Nielsen is executive director of the Harvard-China Project on Energy, Economy and Environment, Mun Ho is an economist there. Ho is also a Visiting Scholar at Resources for the Future, Washington DC. Click here to see full citation of research and papers.