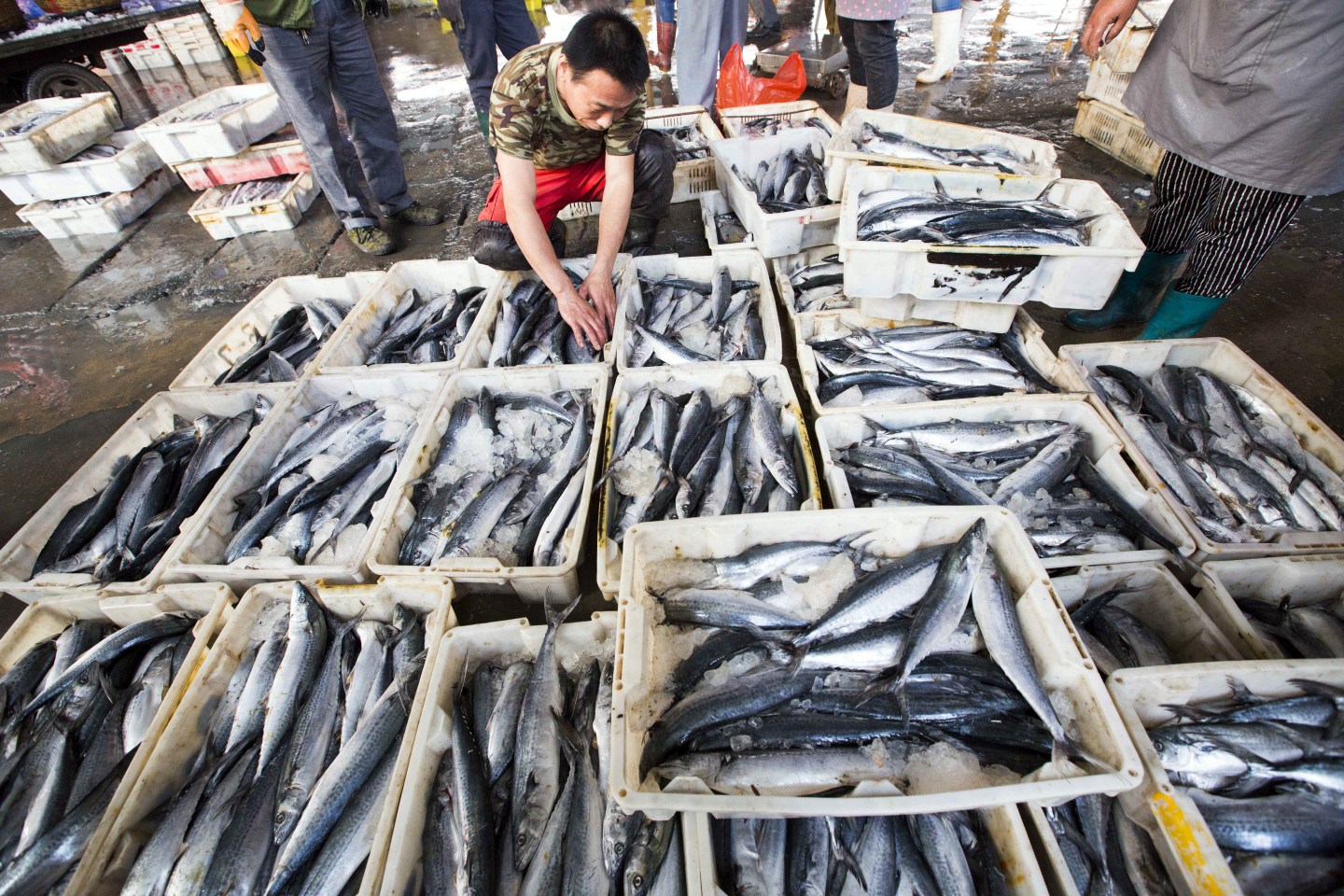 (YANJI, China) — The brightly colored packages advertising “Walleye Pollock” at the West Market in Yanji, a Chinese city near the border with North Korea, say the fish came from China.

But 15 vendors interviewed at the market say the fish came in from North Korea to be processed, packaged and mostly sold in China. They say they buy the fish from Chinese wholesalers who deal with their North Korean counterparts at the border.

The packaged fish is also exported to countries that ban North Korean products, including South Korea, Japan and the United States, say the vendors, who are also involved in the export of their products.

“All the dried fish is from North Korea but we package it here so we say the fish is from here,” said one vendor who spoke on condition of anonymity.

Smaller packets sell for around 40 yuan ($5.80) while the bigger ones which are often given as gifts sell for at least 100 yuan.

“We export everywhere, mostly to South Korea and Japan. I’ve even exported to the U.S.,” said another vendor. “We sell some of our fish here, but we mostly export overseas.”

The official newspaper of the government of Jilin province, where Yanji is located, said in a September article that North Korean and Russian seafood is processed in a town near Yanji, before being exported to South Korea, Japan, the United States and Europe.

Reuters could not independently confirm that North Korean seafood from Yanji or nearby towns is being exported to South Korea, Japan and the United States.

The United States, Japan and South Korea, ban products made inside North Korea, as well as those using North Korean ingredients produced in third countries, such as China.

The United Nations Security Council imposed new sanctions on North Korea this month aimed at cutting its annual export revenue by a quarter in response to Pyongyang’s fifth and largest nuclear test yet in September.

China’s imports of North Korean seafood are allowed under U.N. sanctions, if they support the livelihood of ordinary North Korean fishermen.

In practice, it is almost impossible to ascertain whether the seafood that comes across the border is from independent fishermen or state-linked companies, analysts said.

China’s foreign ministry spokesman Lu Kang declined to respond to a Reuters question about the repackaging of North Korean fish for export.

“Beijing strongly supports the U.N. Security Council sanctions. But we have never accepted and never approved any other countries using so-called unilateral sanctions,” Kang said, referring to the comprehensive bans imposed by the United States, Japan and South Korea.

South Korea’s Customs Service said that since 2010 it has demanded certificates of origin on 22 items, including mushrooms and seafood coming from China and Russia.

“If the goods are found to have originated from North Korea, they are confiscated and the importers are fined,” said a customs official who declined to be identified.

A Japanese customs official said in response to Reuters that Japan requires North Korea’s neighbours, including China and Russia, to certify their seafood products do not come from North Korea. “We thoroughly check those items at the water’s edge,” the official said.

U.S. Customs and Border Protection spokesman Daniel Hetlage declined to comment on any North Korean seafood that may be exported to the United States. He pointed to language in the U.S. Treasury Department’s website that says about the U.S. sanctions: “This broad prohibition applies to goods, services, and technology from North Korea that are used as components of finished products of, or substantially transformed in, a third country.”

The vast majority of North Korea’s exports come through China, and seafood is one of the more rapidly growing items. From January to October this year, China bought more than $156 million in North Korean seafood exports, up 74 percent from 2015, according to Chinese customs data.

It’s not clear from the data how much North Korean seafood processed in China was re-exported to third countries.

China has argued strongly to exempt livelihood exports from U.N. sanctions because it does not want to punish ordinary North Koreans for the actions of its government.

But it’s practically impossible for a fisherman on his own in North Korea to collect fish products and then link into a distribution channel that goes to China, said Andray Abrahamian of Choson Exchange, a Singapore-based company that trains North Koreans in business skills.

“He would need to be working with, or directly for, a bigger fishery company or seafood processing company in North Korea. How those arrangements are made however, there’s probably a lot of variance.”