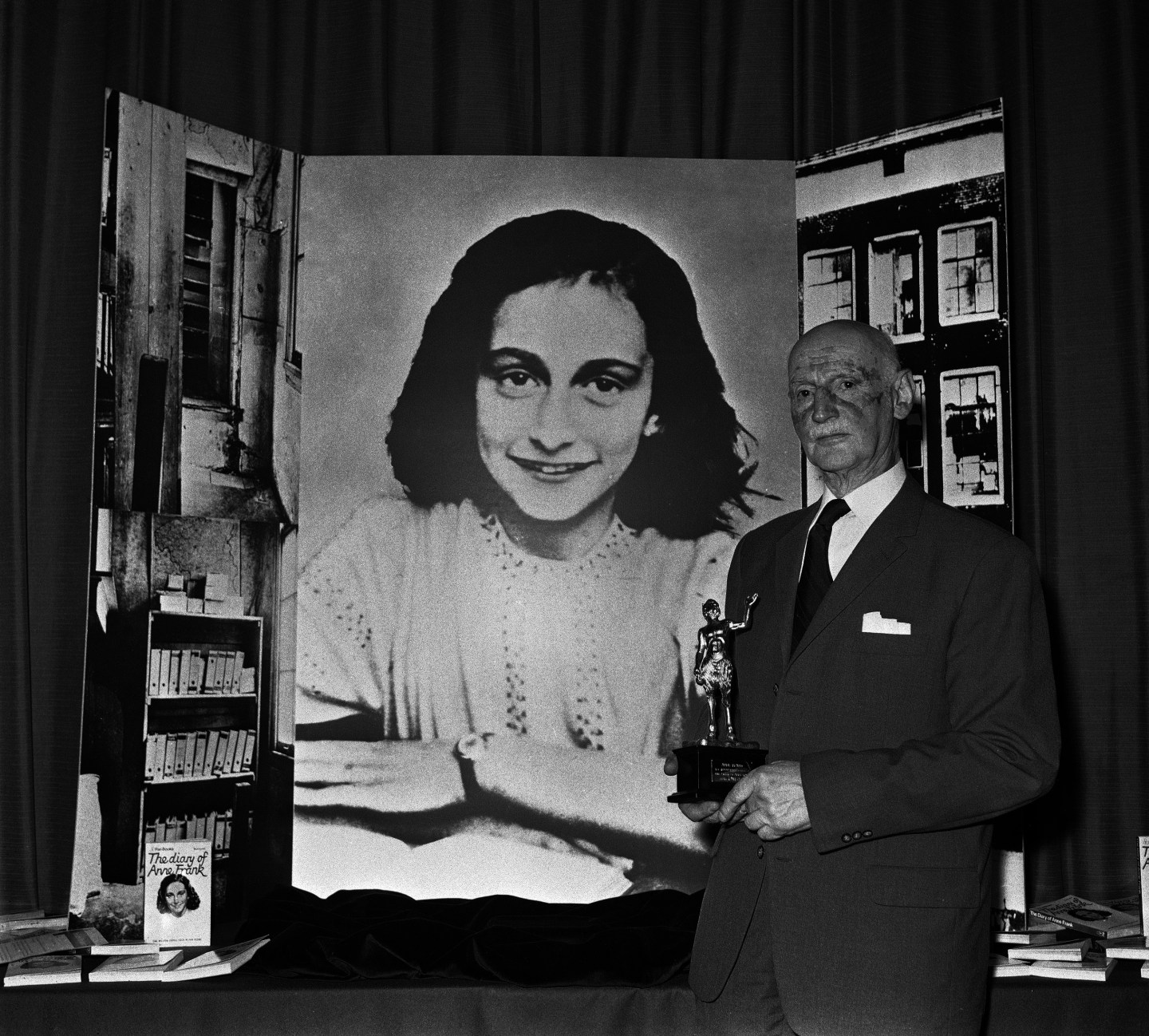 Dr. Otto Frank holds the Golden Pan award, given for the sale of one million copies of the famous paperback, ?The Diary of Anne Frank?. The story of the Jewish family who went into hiding in 1942 in Amsterdam, where they remained undiscovered for two years. After discovery and eventual death, the diary was returned to Dr. Frank, the families only survivor. The award was made in London on June 14, 1971 at the Waldorf Hotel. (AP Photo/Dave Caulkin)
Photograph by Dave Caulkin — AP

Something unsettling is happening on Google. Querying the search engine for “did the Holocaust happen” now returns an unexpected first result: A page from the website Stormfront titled “Top 10 reasons why the Holocaust didn’t happen.”

Stormfront is an American neo-Nazi group created by a former boss of the Alabama Ku Klux Klan, and is virulently anti-Semitic and anti-black.

The group’s appearance on the Google search results was reported by the Guardian on Sunday and, as of Monday afternoon ET, it remains the top result. Here is a screenshot:

The implications are alarming. Due to the search engine’s placement of the website, a young person unfamiliar with history, or a person seeking to validate a conspiracy theory, could easily get drawn into the Stormfront site as a jumping-off point for research.

Of course, this isn’t the case for all holocaust-search results. A user who types in the word “holocaust” will find Wikipedia entries and academic research sites. But the “did the holocaust happen” results are still important because the query is not an esoteric one and because Google will auto-complete the phrase for anyone who types “did the hol..” as the Guardian points out.

Unfortunately, it also attracted a number of trolls on Twitter who celebrated the result, including former politician David Duke, a white supremacist and avid Donald Trump supporter:

In response to a question from Fortune, a Google spokesperson suggested the company does not intend to do anything to change the search results.

“We are saddened to see that hate organizations still exist. The fact that hate sites appear in Search results does not mean that Google endorses these views,” said the spokesperson in a statement. According to the company, a site’s ranking in search results is determined by computer algorithms using hundreds of factors to calculate a page’s relevance to a given query.

“We do not remove content from our search results, except in very limited cases such as illegal content, malware and violations of our webmaster guidelines,” the spokesperson said.

The flap over the holocaust phrase comes a week after Google faced a similar controversy over auto-complete results that suggested a “are Jews evil” query.

For the company founders, Sergey Brin and Larry Page, the surge of anti-Semitism on their website is likely distressing since both men are Jewish, and have wrestled with how to preserve the integrity of search results while not giving license to hate.

As Stephen Levy recounted in In the Plex, a history of Google, Brin confronted a similar problem in 2004. Aghast about anti-Semitic search results, Brin also didn’t want to impose his view on the world saying, “It’s a bad technology practice.” (In response, Google decided to insert sponsored ads explaining offensive search results.)

For those displeased with the recent holocaust search results, one Twitter user suggested a possiblesolution —trying to dislodge them by clicking on different results in a bid to dislodge the Stormfront page.

Google "did the holocaust happen" then click the good ones. I got:
😡 Neo-nazi site
✅ Wikipedia: Holocaust Denial
✅ Holocaust Museum https://t.co/kQ9peXcuQi

It’s not clear, however, if such a tactic will work. In any case, the controversy is likely to provide yet more grist to an ongoing debate over the power of algorithms run by Google and Facebook to provide the public with information.