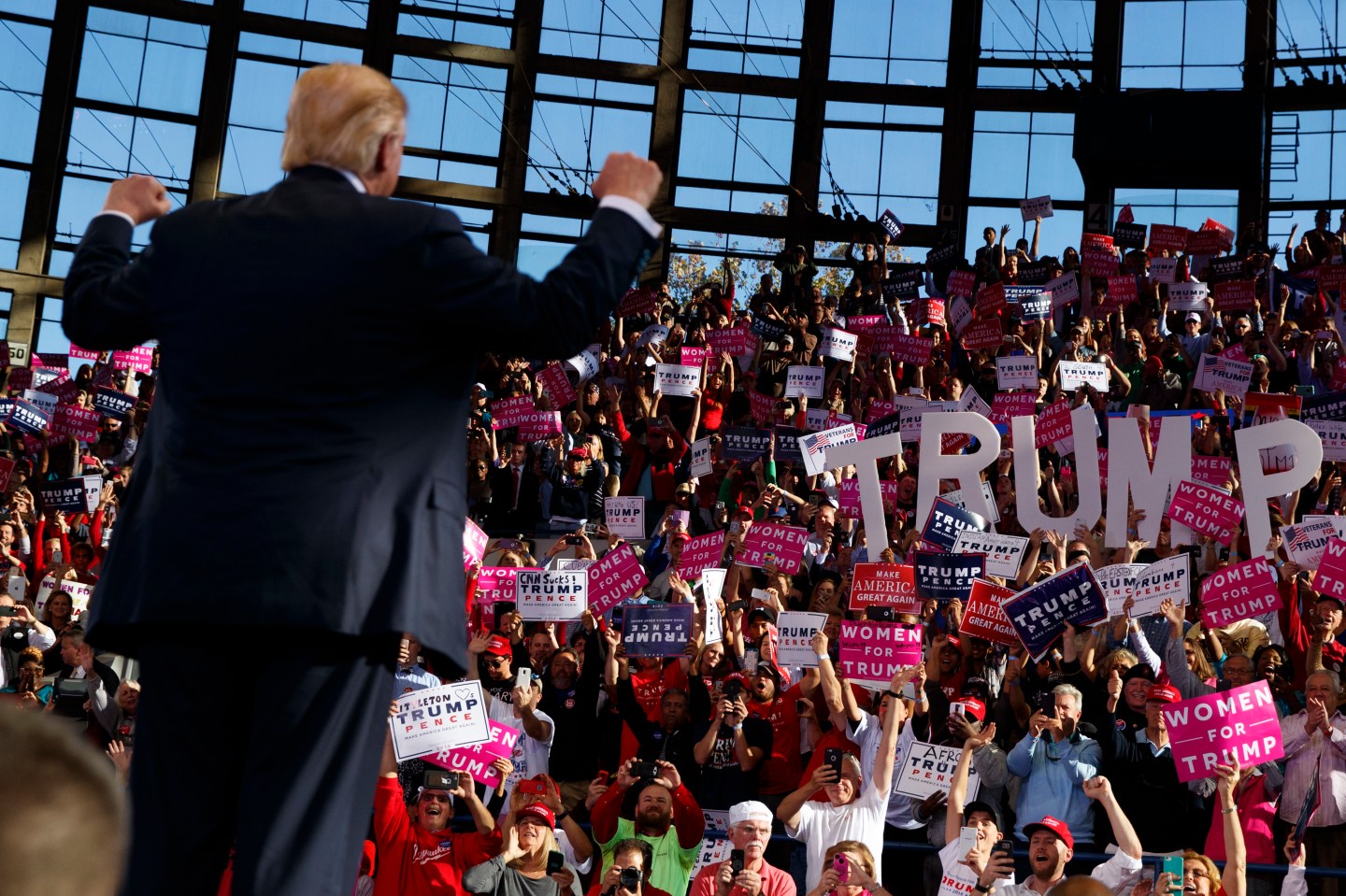 FILE - In this Nov. 7, 2016 file photo, then-Republican presidential candidate Donald Trump gestures as he arrives to speak to a campaign rally in Raleigh, N.C. Trump says of his voters "I am your voice." But there's really nothing in Washington to amplify it. (AP Photo/ Evan Vucci, File)
Photograph by Evan Vucci—AP

President-elect Donald Trump is taking his show back on the road.

Trump is slated to hold the second stop of this “thank you” tour Tuesday in North Carolina, less than a week after his bombastic return to rallies at an Ohio appearance that felt more like a raucous campaign stop than a traditional speech by a president-to-be.

At that Cincinnati stop, Trump disparaged the media as “dishonest,” inspired loud “Build the wall” chants, took swipes at fellow Republicans and stunned his own aides with his surprise announcement from the stage that that he was appointing retired Gen. James Mattis as secretary of defense.

The Tuesday appearance in Fayetteville will be followed by rallies in Iowa and Michigan later this week as Trump barnstorms the country to salute his supporters who delivered the victories in the battleground states he needed to capture the White House.

The North Carolina rally will come a day after Trump chose retired neurosurgeon Ben Carson to be secretary of the Department of Housing and Urban Development, raising fresh concerns about the lack of experience some of Trump’s Cabinet picks have with agencies they’re now being chosen to lead.

Carson, who opposed Trump in the Republican primaries, has no background in government or running a large bureaucracy.

In addition, South Carolina Gov. Nikki Haley, Trump’s choice to be ambassador to the United Nations, has no foreign policy experience. Steve Mnuchin, a former Goldman Sachs partner and Hollywood executive, is Trump’s man to lead the Treasury Department but has never worked in government. And Mattis, a widely praised battlefield commander, spent decades in the Marines but now is tapped to run the nation’s largest government agency, the Defense Department, with 740,000 civilian employees in addition to 1.3 million service personnel.

Democrats swiftly criticized Carson’s qualifications for his job. House Democratic leader Nancy Pelosi called him a “disconcerting and disturbingly unqualified choice.” And New York Sen. Charles Schumer said he had “serious concerns about Dr. Carson’s lack of expertise and experience in dealing with housing issues. Someone who is as anti-government as him is a strange fit for housing secretary, to say the least.”

Carson would oversee a budget of nearly $50 billion that provides rental assistance for more than 5 million households. Demand for that assistance is high in part because housing costs are rising faster than incomes. HUD also promotes home ownership with the Federal Housing Administration underwriting about 1 in 6 mortgages issued in the U.S. The agency is charged with enforcing federal fair housing laws, too.

In a statement, Trump said he was “thrilled to nominate” Carson, citing his “brilliant mind” and his passion “about strengthening communities and families within those communities.”

Carson, who grew up poor, quickly endorsed Trump after ending his own presidential bid despite Trump noting what he called Carson’s “pathological temper.” Carson has been coy about joining the new administration, saying shortly after Trump’s election victory that he wasn’t certain he’d fit into a Cabinet-style role in a job like Health and Human Services secretary.

Trump’s selections also highlight a frequent divide between the two major political parties in their strategies in filling out a Cabinet: In early 2009, Republicans criticized incoming President Barack Obama for not making enough selections with private-sector experience.

On Monday, Trump received a fresh stream of visitors to the New York skyscraper that bears his name. His most surprising guest was Democratic former Vice President Al Gore. Transition officials said early Monday that Gore would meet with Trump’s daughter, Ivanka, about climate change, which is Gore’s signature issue.

But Gore said he also met with Trump directly and the two had a “very productive conversation.”

“It was a sincere search for areas of common ground,” said Gore, who did not detail what the men discussed. The president-elect has called man-made climate change a hoax and has pledged to undo a number of regulations designed to protect the environment.

Trump’s running mate, Mike Pence, told reporters that staffing decisions were made Monday that would be announced in the coming days.