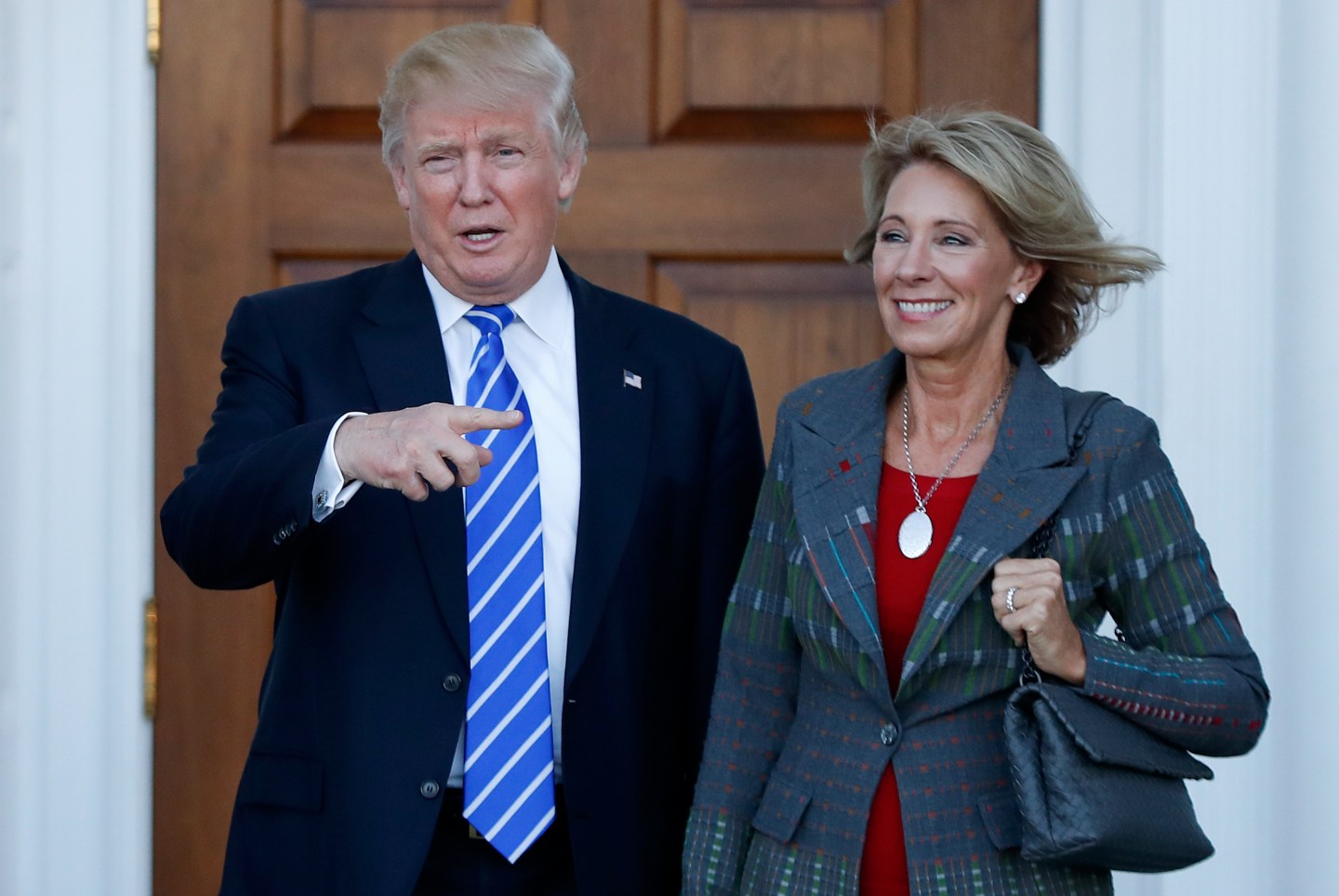 Within minutes of being named Donald Trump’s choice for education secretary, Betsy DeVos pledged to oversee a “transformational change” in U.S. education, something the wealthy Republican donor has pursued in her home state of Michigan and beyond as an advocate for school choice.

“I am honored to work with the president-elect on his vision to make American education great again,” DeVos, 58, tweeted after the announcement Wednesday afternoon. “The status quo in ed is not acceptable.”

I am honored to work with the President-elect on his vision to make American education great again. The status quo in ed is not acceptable.

Just as swiftly came the backlash—from some conservatives who warned she had previously supported the Common Core education standards that Trump railed against during the campaign, and from teachers unions fiercely opposed to the kinds of reforms she supports.

“To clarify, I am not a supporter—period,” she tweeted Wednesday as questions circulated about her position on the Common Core learning standards adopted by many states to improve student readiness for college or a career.

Many of you are asking about Common Core. To clarify, I am not a supporter—period. Read my full stance, here: https://t.co/qB2nAXvX0B

On her website, DeVos said the higher standards supported by governors made sense at first but “got turned into a federalized boondoggle.”

Trump called her “a brilliant and passionate education advocate.”

“Under her leadership we will reform the U.S. education system and break the bureaucracy that is holding our children back so that we can deliver world-class education and school choice to all families,” the incoming president said.

For her part, DeVos was slow to warm to Trump. She told The Associated Press in July, “A lot of the things he has said are very off-putting and concerning.” At the Republican National Convention in July, she was a delegate for Gov. John Kasich of Ohio.

The choice reinforces Trump’s pledge to make school choice an education priority. In September, he pledged to funnel $20 billion in existing federal dollars into scholarships for low-income students, an idea that would require congressional approval.

DeVos, a former Michigan Republican Party chairwoman, leads the American Federation for Children, which along with its state-affiliated PACs contributed to 121 races in 12 states in the general election to support pro-school choice candidates, according to its website.

“In nominating DeVos, Trump makes it loud and clear that his education policy will focus on privatizing, defunding and destroying public education in America,” American Federation of Teachers President Randi Weingarten said in a statement.

Trump’s appointment of DeVos is subject to confirmation by the Republican-controlled U.S. Senate. Sen. Lamar Alexander said the Senate’s education committee would move swiftly on the nomination in January. He called DeVos “an excellent choice.”

The new education secretary will oversee implementation of the Every Student Succeeds Act, the federal law passed last year to replace No Child Left Behind. The Higher Education Act is up for reauthorization.

Former Michigan Gov. John Engler, who now heads the Business Roundtable, an association of chief executives that advocates for public policy, told The Associated Press that his friend DeVos is an “inspired choice” by Trump.

“She is passionate about the prospect of making sure that every child in every family, regardless of their economic circumstances, has an opportunity to go to a good school,” he said. “She’s the perfect person to take the Trump vision, which was articulated in very broad terms about providing choice and opportunity for students, and making sure that that can become more of a reality for kids who too long have been trapped in underperforming schools without any real options.”

DeVos’ support of school choice goes back more than 20 years. She was politically involved in the passage of Michigan’s charter school bill in 1993 and worked on an unsuccessful effort to change Michigan’s state constitution to allow tax-credit scholarships or vouchers. She has described that loss as her biggest setback.

She first became involved in politics at age 18, handing out campaign literature and appearing at rallies in support of Gerald Ford’s 1976 presidential bid.

Her husband, Dick, is an heir to the Amway fortune and a former company president. He ran unsuccessfully for governor of Michigan in 2006, spending more than $35 million of his own money in a losing bid to unseat Democratic Gov. Jennifer Granholm.

At his wife’s urging, Dick DeVos, a pilot, started a charter high school at the Gerald R. Ford International Airport in Grand Rapids. The West Michigan Aviation Academy opened in 2010.

The couple has four children, none of whom attended public school.

DeVos and her husband gave $22.5 million to the Kennedy Center for the Performing Arts in Washington in 2010, at the time the largest private donation in the center’s history.

“This would not qualify as ‘draining the swamp,'” Cannon said, referencing Trump’s campaign slogan. “And it seems to fly in the face of what Trump has stated on education policy up to this point.”