Gloria Steinem: After Trump’s Election, the U.S. Is Like a Victim of Domestic Abuse 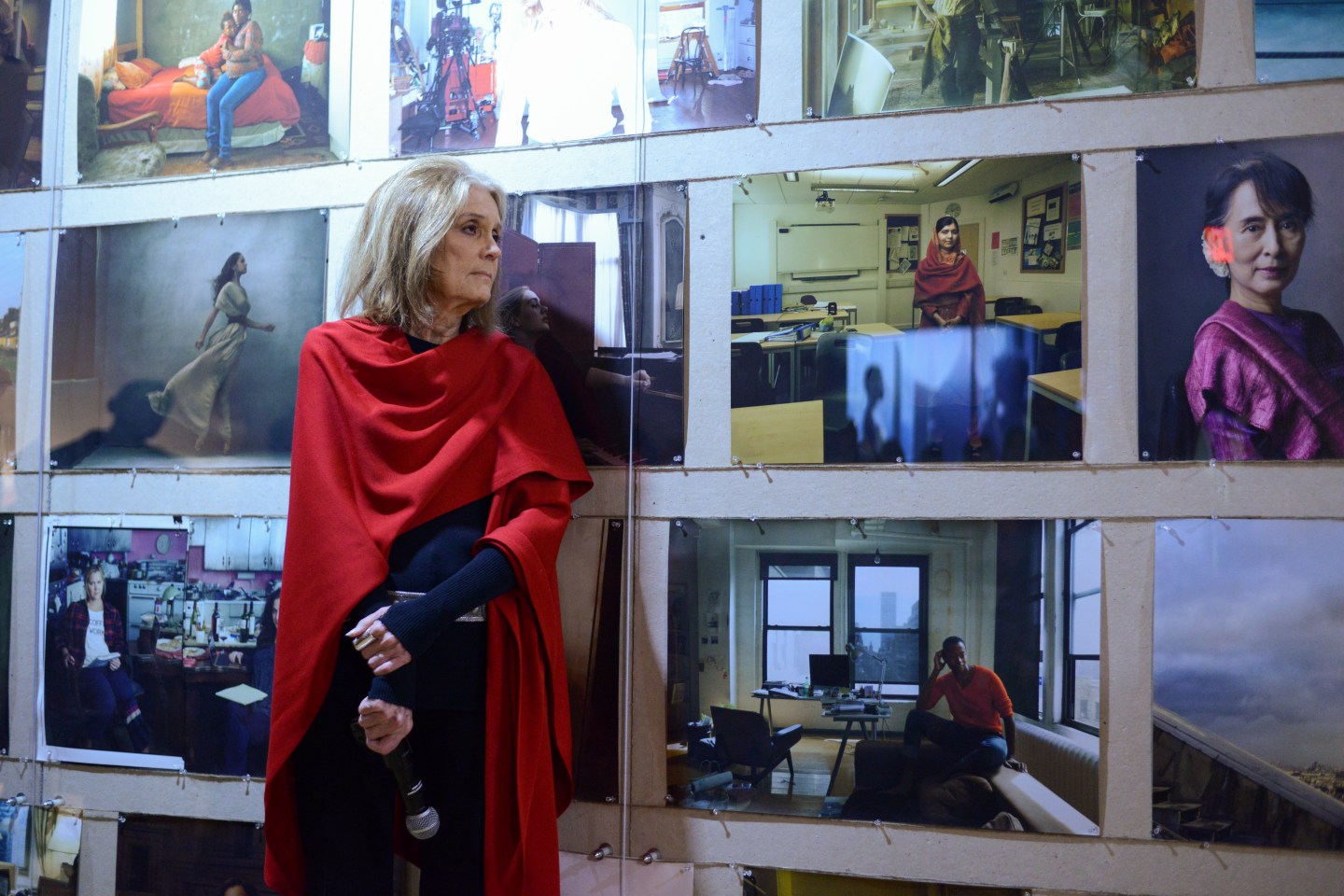 Annie Leibovitz’s latest exhibition, “Women: New Portraits,” has been traveling the globe since it debuted in London early this year. But the latest iteration of the show, which opens in New York City on Friday, has a fresh tweak: A photo of Hillary Clinton hangs in the middle of the exhibit’s central wall of portraits.

“Secretary Clinton was not on this wall until this show,” Leibovitz said during a Tuesday preview of the exhibition co-hosted by famed feminist activist Gloria Steinem, who collaborated with Leibovitz on the project. “It’s the first time I folded her into the sea—into the ocean of women who mean something to us today.”

Leibovitz, who also included some of the photos she shot during the campaign in the show, noted that in the portrait of Clinton, there’s a tile visible on her desk. “I asked my retoucher, ‘Would you please sharpen that tile?'” It says never, never, never give up.”

The exhibit, which was commissioned by UBS, is being housed in the former Bayview Correctional Facility, a women’s prison that is being transformed into the The Women’s Building. Set to open in 2020, the space is expected to become a hub for the girls’ and women’s rights movement.

The show features a wide range of women, including Facebook COO Sheryl Sandberg, tennis legends Serena and Venus Williams, dancer Misty Copeland, and singer and artist Patti Smith. In the sphere of politics and government, Clinton is joined by women such as Myanmar’s Aung San Suu Kyi, U.S ambassador to the United Nations Samantha Power, and senator-elect Kamala Harris.

Steinem, who helped select some of these subjects, fielded a press question about how she feels about the future of women’s rights in the wake of Donald Trump’s election to the U.S. presidency.

Steinem attributed Trump’s win, in part, to backlash against the progress of women and minorities. “I think that what has been revealed to us is a truth that we must now deal with,” she said. “Never again is anyone going to say ‘post-feminist’ or ‘post-racist’ because we [now] understand that there is something like a third of the country that is still locked into these old hierarchies.”

The activist compared the current state of the U.S. to a survivor of domestic violence. “The moment just before escaping or just after escaping [from a violent household] is the most dangerous time,” she said. “I think we are at a time of maximum danger in this country and we need to look out for each other.”

However, for supporters of women’s and minority rights, there’s value in learning where the country truly stands and how much further it has to go. “Just as we would not tell anyone to go back into a violent household, we would not tell each other to go back,” said Steinem. “And even though it’s a time of danger maybe we are about to be free.”