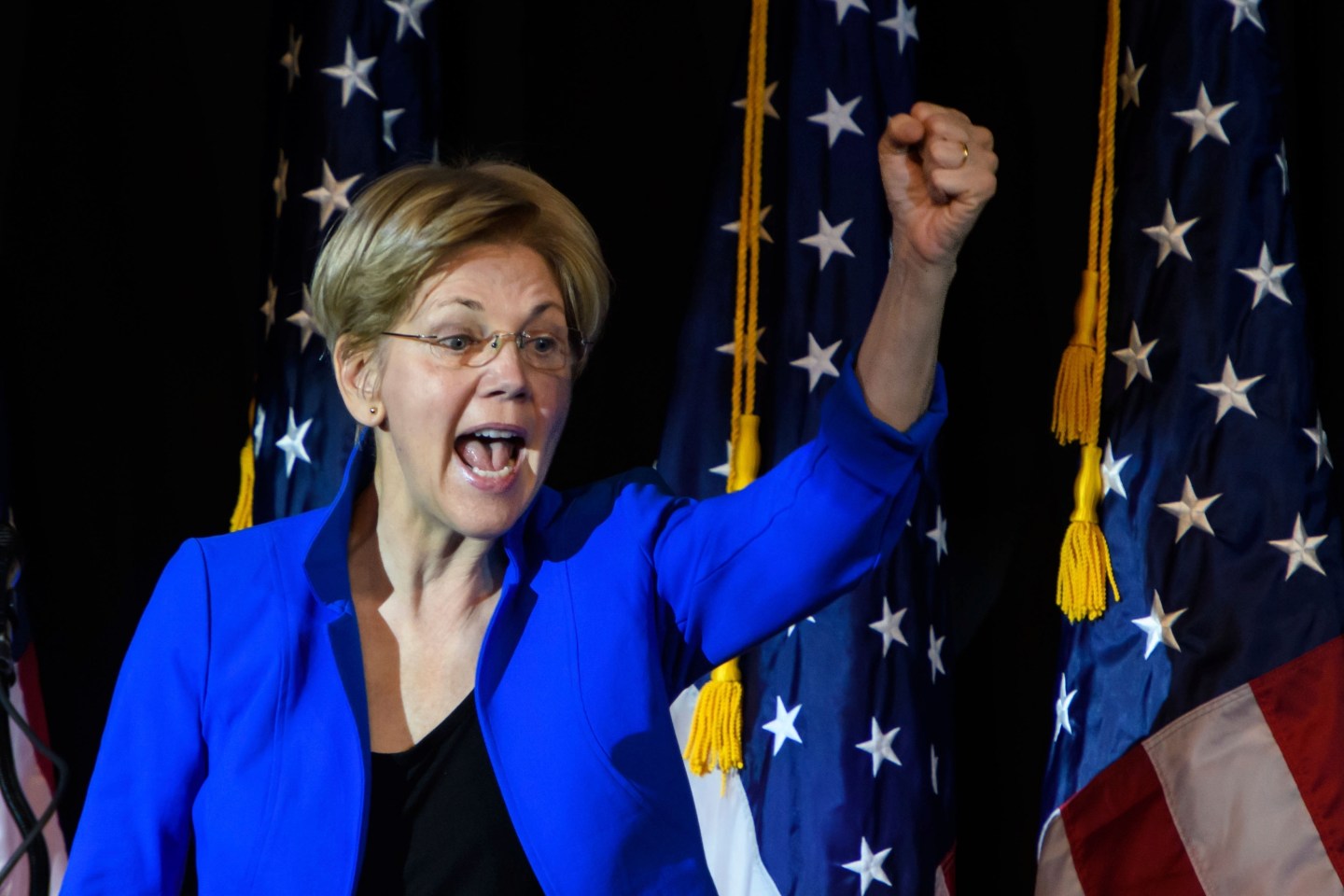 In this photo taken Oct. 14, 2016, Sen. Elizabeth Warren, D-Mass. speaks at a rally for Missouri Democratic Senate candidate, Secretary of State Jason Kander, in Kansas City, Mo. From liberal California to conservative Missouri, there are few places Warren won’t go this election season. The Massachusetts Democrat is campaigning for Hillary Clinton, for Senate candidates and for progressive policies, banking political capital that she could end up spending in ways Clinton and other Democratic leaders won’t like. (AP Photo/Reed Hoffmann)
Photograph by Reed Hoffmann—AP

Elizabeth Warren has a surprising message for President-elect Donald Trump: She’s eager to work with him.

The progressive heavy on Tuesday made an impassioned, if qualified, offer to cooperate on a populist agenda with the incoming Republican—a man with whom she spent the duration of the campaign trading vicious barbs. Warren, in an address to the AFL-CIO Executive Council, framed Trump’s victory as a demand by voters for a fundamental shakeup of the economic and political status quo. And she said to the extent the next president wants to crack down on Wall Street, reform campaign finance, rethink trade deals and invest in infrastructure projects, she stands ready to help.

“When President-elect Trump wants to take on these issues, when his goal is to increase the economic security of middle class families, then count me in,” Warren said. “I will push aside our differences, and I will work with him to achieve that goal. I offer to work as hard as I can and to pull in as many people as I can into this effort.”

The address was more remarkable considering her recent history with Trump. Warren did not offer an endorsement in the Democratic primary between Hillary Clinton and Bernie Sanders. But once Clinton clinched the nomination, the Massachusetts liberal proved a stout surrogate for Clinton on the trail—and a no-holds-barred critic of the billionaire real-estate developer, whom she savaged as a “thin-skinned, racist bully” and a “small, insecure money grubber.” (Trump in turn made her a frequent target on the stump, nicknaming her “Pocahontas” for having once claimed Native American ancestry.)

On Tuesday, Warren offered a distinctly different view, presenting Trump as a sort of profile in courage for advocating a populist program that antagonized entrenched interests in his own party. “President-elect Trump spoke to these issues. Republican elites hated him for it. And he didn’t care. He did it anyway,” she said. “He criticized Wall Street’s big money and their dominance in Washington, straight up.”

Warren even drew a cross-partisan kinship between Trump and Sanders for rejecting big-dollar contributions as the engines of their respective campaigns. Notably, she never mentioned Clinton. Whether deliberately or not, she did appear to repurpose one of Clinton’s signature campaign lines. The Democratic nominee frequently said anyone accusing her of playing the women’s card should “deal [her] in”—and Warren on Tuesday declared, twice, that if Trump was ready to make good on his promises to working families, “count me in.”

But the senator also made clear that she isn’t letting Trump off the hook for the campaign he waged, which she described as a “toxic stew of hatred and fear.” She said progressives wouldn’t tolerate any bigotry from him in office. And if the Trump administration decides to focus on accommodating financial industry interests, “we will fight them every step of the way.”

That a figure who stands to play a leading role in the Democratic rebuilding project would reach out so forthrightly to the man who just vanquished her party’s nominee points to how unsettled things remain in the wake of Trump’s win. The vagueness of Trump’s policy program—not to mention his strained relations with leaders in his own party—presents opportunities to remake old alignments. It will be up to Trump to decide how he navigates a system he just shook to its core.