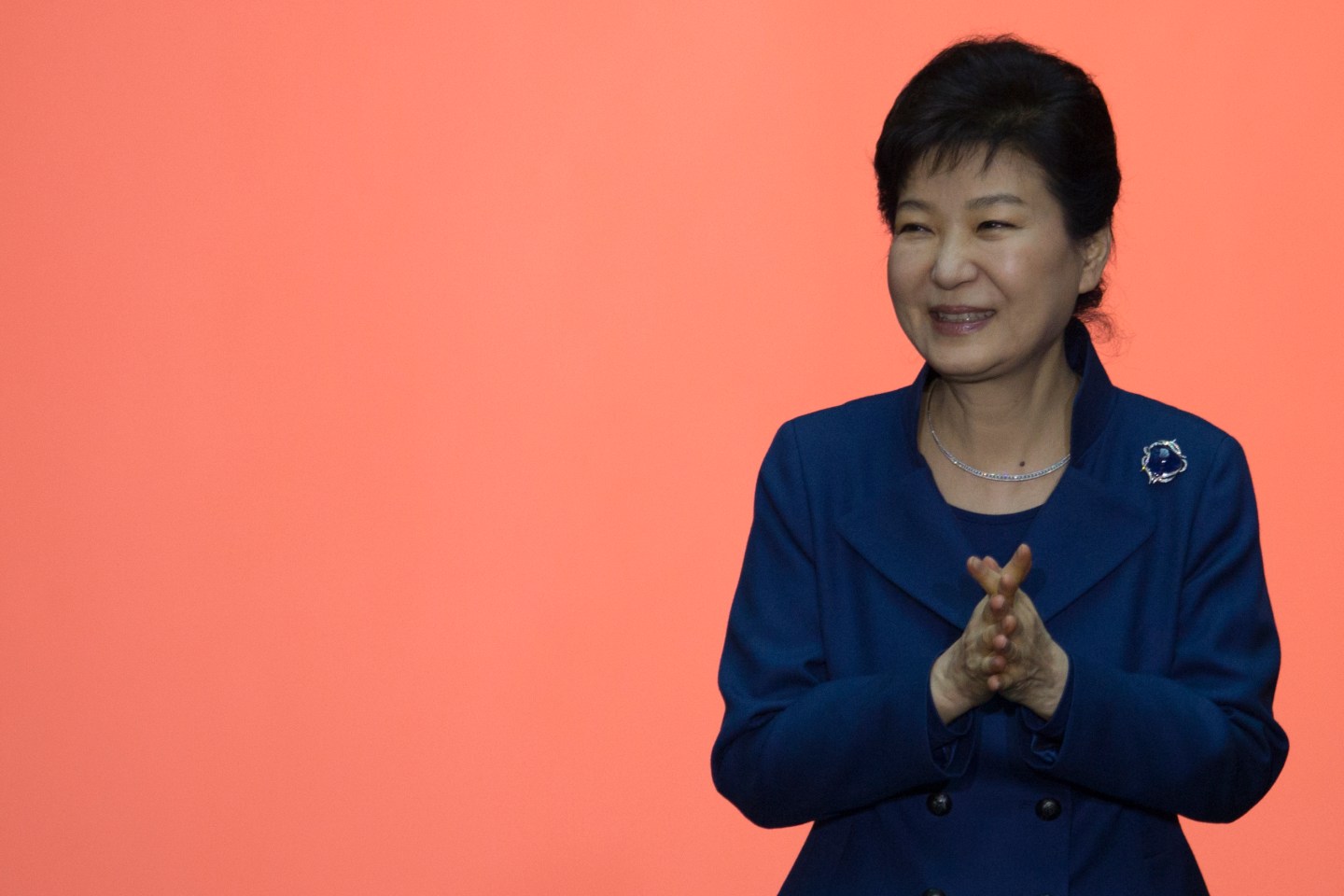 When South Korean President Park Geun-hye delivered her 2013 inaugural address after being elected the country’s first female president, she spoke about ushering in “a new era of hope,” in which she would do her “utmost” to build “a Republic of Korea that is prosperous and where happiness is felt by all Koreans.”

But for Park, the past few weeks have been far from happy.

Park, who came to power facing tough challenges such as North Korea’s nuclear threat and the aftermath of the global economic crisis, is embroiled in an influence-peddling scandal involving her shadowy advisor and friend Choi Soon-sil. The question at the heart of the matter is whether Choi used her undue authority in Park’s administration as leverage to collect more than $70 million in donations for the two non-profits she runs. But the details of the brouhaha are worthy of a Hollywood plot.

1. It started with a fortune teller

The two women met each other through Choi’s father, Choi Tae-min, a pastor, who befriended Park shortly after her mother was assassinated in 1974. Normal enough, right? Wrong. According to a leaked diplomatic cable, Choi’s father first connected with Park by telling her that her mother had appeared to him in a dream and asked for help. Turns out Choi’s father, who died in 1994, is considered a “Rasputin”-like character and the church he leads is known as a “Shamanistic cult.” He was accused of using his relationship with Park to secure bribes, and the diplomatic cable relayed rumors that he “had complete control over Park’s body and soul during her formative years and that his children accumulated enormous wealth as a result.” An angry public now wonders whether Choi has essentially taken over her father’s position as Park’s closest advisor, despite having no official government role.

Scrutiny of Choi resurfaced in recent weeks due to questions about her daughter, Chung Yoo-ra, who was accepted to an elite women’s college called Ewha University. Her admission raised eyebrows since the university reportedly gave her extra credit for achievements in dressage, or competitive horse dancing. Ewha’s president resigned amid the allegations of preferential treatment. The whole incident prompted the media to take a closer look at the relationship between Choi and Park and the power that Choi might wield.

Speculation grew to such a frenzy that in a rare televised apology last week, Park admitted that Choi provided feedback on her public speeches during the 2012 presidential campaign. Specifically, Park said, “Choi advised me on expressions in my speeches and public relations during the last presidential campaign and she continued to help me for a certain period of time after I took office.”

Choi has apologized too, telling the South Korean newspaper Segye Ilbo that she saw early versions of Park’s speeches but did not get any financial benefits from their friendship. On Monday, she told journalists, “I committed a crime I deserve to die for.” She added, “Please forgive me.” That expression of remorse wasn’t enough to sway prosecutors. After questioning Choi for hours, they decided on Tuesday to “urgently detain” her—usually an indication that there’s enough evidence for criminal charges.

This weekend, after Park’s apology, an estimated 9,000 protesters swarmed the streets of Seoul to urge Park to leave office. The protest emerged even though the president told several of her top officials to resign, in an effort to reduce the pressure. Demonstrators marched holding signs that said “Who’s the real president?” and “Park Geun-hye step down.”

Local political pundits aren’t optimistic about Park’s political future. In the Korea Herald, Yoon Peyeong-joong, political philosophy professor at Hanshin University, said, “It is basically impossible for the president to wield authority in the current situation. She should back down.”

Park still has time left in her single, five-year term, but that hasn’t stopped speculation about who could succeed her in the next election in December 2017. Among those mentioned is United Nations Secretary General Ban Ki-moon, who will be leaving his post at the end of 2016. Ban, who’s leading most polls, served as the country’s foreign minister from 2004 to 2006.

5. For all its oddities, the scandal is “par for the course”

Since South Korea’s direct presidential election system is relatively young—it was instituted in 1987—the country has “very weak” checks and balances in its political system and questions about corruption are “very par for the course,” Hazel Smith, director of the International Institute of Korean Studies at Britain’s University of Central Lancashire, told Fortune. “It remains to be seen whether this is wrongdoing or poor judgment,” Smith said.