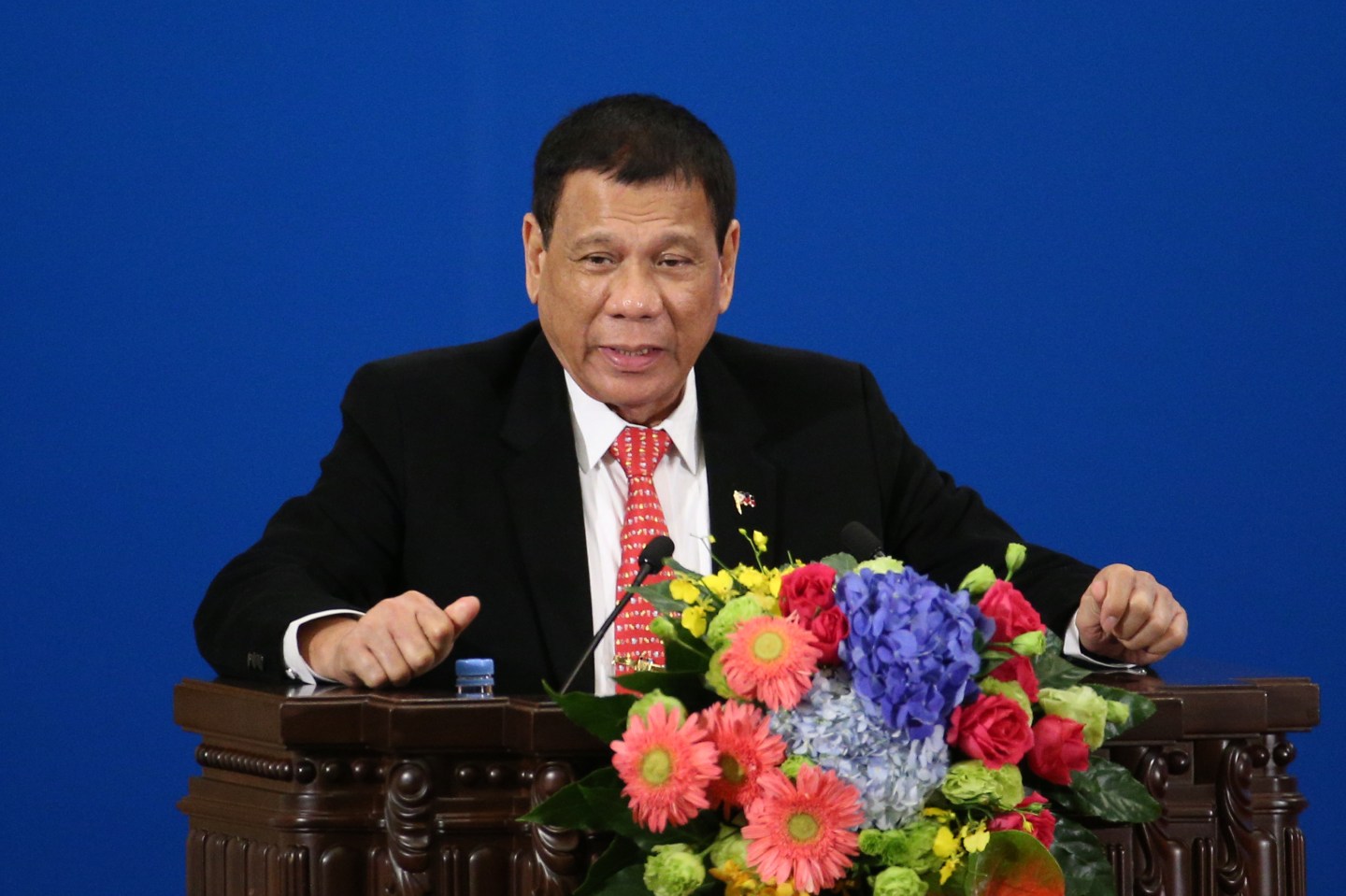 BEIJING, CHINA - OCTOBER 20: Philippines President Rodrigo Duterte makes a speech during the Philippines - China Trade and Investment Fourm at the Great Hall of the People on October 20, 2016 in Beijing, China. Philippine President Rodrigo Duterte is on a four-day state visit to China, his first since taking power in late June, with the aim of improving bilateral relations. (Photo by Wu Hong-Pool/Getty Images)
Wu Hong-Pool/Getty Images

The Philippines will maintain trade and economic ties with the United States, Trade Minister Ramon Lopez said on Friday, a day after President Rodrigo Duterte announced his “separation” from Washington.

Duterte made his comments in Beijing, where he was paving the way for what he calls a new commercial alliance as relations with long-time ally Washington deteriorate.

“With that, in this venue, your honors, in this venue, I announce my separation from the United States,” Duterte told Chinese and Philippine business people to applause at a forum in the Great Hall of the People.

“Both in military, not maybe social, but economics also.”

Duterte’s efforts to engage China, months after a tribunal in the Hague ruled that Beijing did not have historic rights to the South China Sea in a case brought by the previous administration in Manila, marks a reversal in foreign policy since the 71-year-old former mayor took office on June 30.

“Let me clarify. The president did not talk about separation,” Lopez told CNN Philippines in Beijing.

“In terms of economic (ties), we are not stopping trade, investment with America. The president specifically mentioned his desire to strengthen further the ties with China and the ASEAN region which we have been trading with for centuries.”

He said the Philippines was “breaking being too much dependent on one side.”

“But we definitely won’t stop the trade and investment activities with the West, specifically the U.S.”

Duterte’s tone towards China is in stark contrast to the language he has used against the United States, after being infuriated by U.S. criticism of his bloody war on drugs.

He has called U.S. President Barack Obama a “son of a bitch” and told him to “go to hell.” On Wednesday, about 1,000 anti-U.S. protesters gathered outside the U.S. Embassy in Manila calling for the removal of U.S. troops from the southern island of Mindanao.

The United States, a former colonial power, has seen Manila as an important ally in its “rebalance” of resources to Asia in the face of a rising China. The U.S. Embassy press attache in Manila, Molly Koscina, said Duterte’s statements were creating uncertainty.

“We’ve seen a lot of this sort of troubling rhetoric recently which is inexplicably at odds with the warm relationship that exists between the Filipino and American people and the record of important cooperation between our two governments,” she told Reuters in an email.

“We have yet to hear from the Philippine government what Duterte’s remarks on ‘separation’ might mean, but it is creating unnecessary uncertainty.”

She also said the United States would honor alliance commitments and treaty obligations with the Philippines.

“And, of course, we expect the Philippines to do the same.”

“Obviously any relationship is one of mutuality and we will continue to discuss that with our Philippine counterparts,” he told reporters before landing in Turkey. “That’s not new today, but that’s our alliance relationship with the Philippines.”

“NO RUSH TO INTERPRET”

“There is no rush for us to interpret the speech of the president as we have to wait for guidelines that would be coming from him, from the Department of Foreign Affairs, as soon as they come back,” she said.

“As far as China is concerned, we think that at present in international relations we should not have Cold War thinking, it’s either you or me, you win I lose, that kind of zero-sum game,” she told a regular press briefing.

Duterte said in Beijing that he had “realigned (himself) in your ideological flow” and “America has lost now.”

“Maybe I will also go to Russia to talk to (President Vladimir) Putin and tell him that there are three of us against the world – China, Philippines and Russia,” he said. “It’s the only way.”

Wrangling over territory in the South China Sea, where neighbors Brunei, Malaysia, Taiwan and Vietnam also have claims, has consumed China-Philippines relations in recent years.

China claims most of the energy-rich waters through which about $5 trillion in ship-borne trade passes every year, and in 2012 it seized the disputed Scarborough Shoal and denied Philippine fishermen access to its fishing grounds.

In a joint statement issued by China’s official Xinhua news agency, China and the Philippines said it was important to address differences in the South China Sea “without resorting to the threat or use of force.”