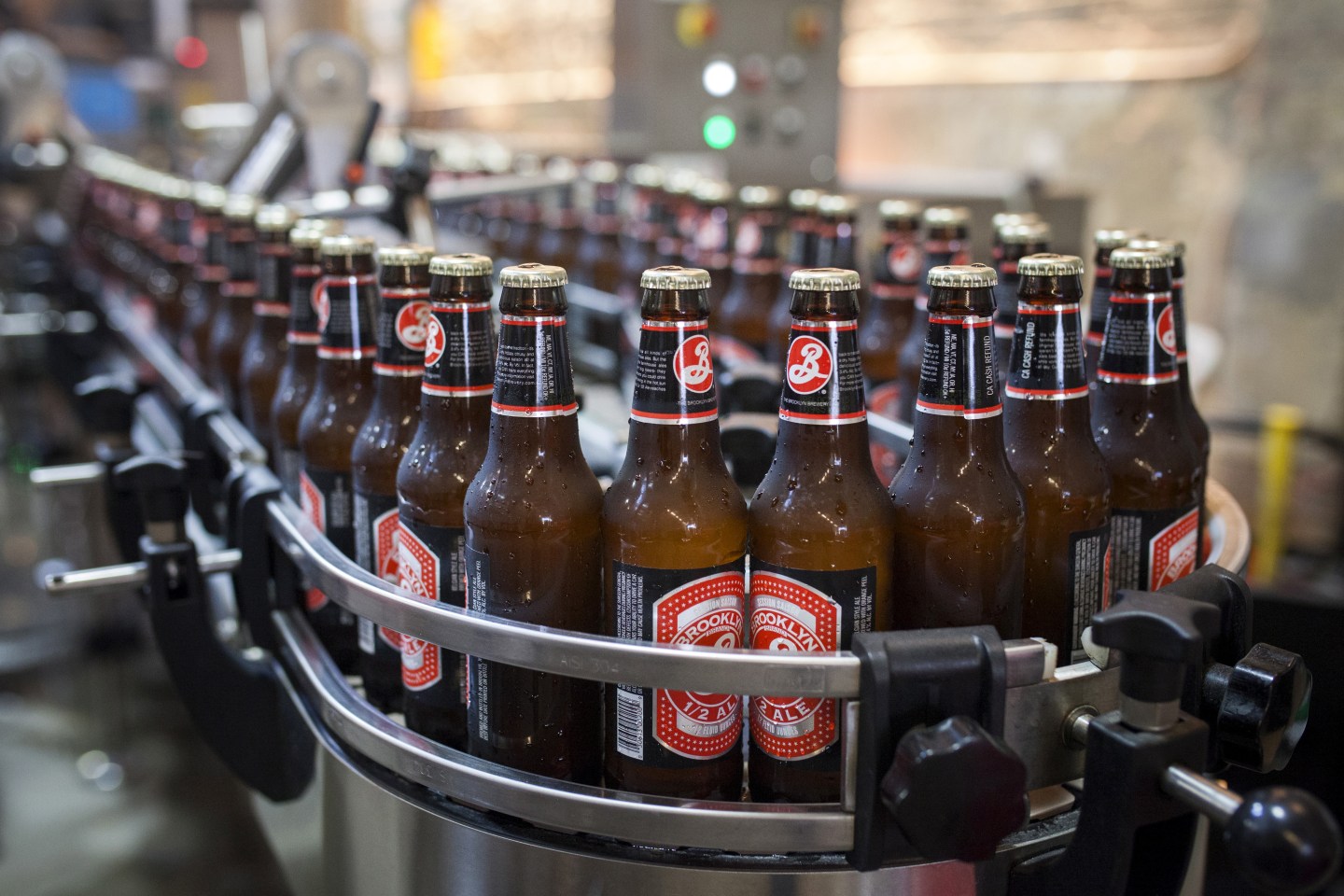 Bottled beers move down a bottling line at the Brooklyn Brewery in the Brooklyn borough of New York, United States, April 6, 2015. The popularity of craft beers has grown rapidly in recent years in the United States as drinkers seek new tastes, with sales estimated to have climbed more than a fifth in 2014. U.S. sales of craft beer in 2014 were worth nearly $20 billion, according to U.S. industry body the Brewers Association, up more than 22 percent from the previous year and accounting for nearly a fifth of all beer sold in the country. Picture taken April 6, 2015. REUTERS/Sara Hylton - RTX1JGU4
Sara Hylton—Reuters

Brooklyn Brewery, the largest New York state-based craft brewer, has sold off a minority stake to Japan conglomerate Kirin Holdings in a bid to bring the beer producer’s ales to new Asian markets.

Under the terms of the deal, Kirin has agreed to acquire a 24.5% stake in Brooklyn Brewery to tap the company’s beer styles for the Japanese and Brazilian markets. Brooklyn Brewery founder and Chairman Steve Hindy told Fortune that the deal was important because the Japanese beer market is highly insular—imports only make up less than 2% of total industry volume—so finding a partner was critical if Brooklyn Brewery wanted success in that market.

Brooklyn Brewery, unlike many of its American craft industry peers, has long sought growth abroad as it scales up the company’s business since it was founded back in 1987. The company is expected to sell about 300,000 barrels this year and half of that will be exported, Hindy said. Much of that distribution is through a distribution partnership with Big Beer producer Carlsberg in Europe.

“We think Kirin is a great partner for Asia,” Hindy said. Kirin’s existing business already includes beers as well as soft drinks, foods, whisky and pharmaceuticals. Adding Brooklyn Brewery beers to the company’s portfolio isn’t too far off from the established businesses the company operates currently.

Importantly, the threshold of the minority stake—24.5% in this case—means Brooklyn Brewery will be able to retain its “craft” status here in the U.S. The Brewers Association says that a brewery can be deemed independent as long as minority control is 25% or less.

The popularity of the craft beer movement in the United States has led to a slew of deals in the past few years. The four largest U.S. beer companies—Anheuser-Busch InBev, MillerCoors, Heineken, and Constellation Brands—have all participated in deals, as have private-equity firms and other investors.

The deal for Brooklyn Brewery is particularly significant as it is the nation’s 12th-largest craft brewery. The company—which generates about half of volume from its flagship Brooklyn Lager—is also unique in that it hasn’t expanded into many new U.S. markets in recent years. Industry publication Beer Marketer’s Insights says it only added distribution to two new states the past few years. That could allude to the tough competition U.S. craft brewers are seeing in their home market.

Growth at Brooklyn Brewery has instead come from international expansion. In fact, the company’s exports make up an impressive 30% of the total from the U.S. craft industry.

Hindy and others have said that the U.S. craft beer movement has in recent years won high praise from beer drinkers abroad—ironic in some ways as American-produced beers for decades were viewed as poorly made.

“The American craft beer movement, which has brought back so many traditional styles and developed new styles, is responsible for a beer renaissance talking hold over the world,” Hindy said. “Those great brewing countries are now looking to the U.S. for the most innovative and creative brewing that’s happening around the world.”