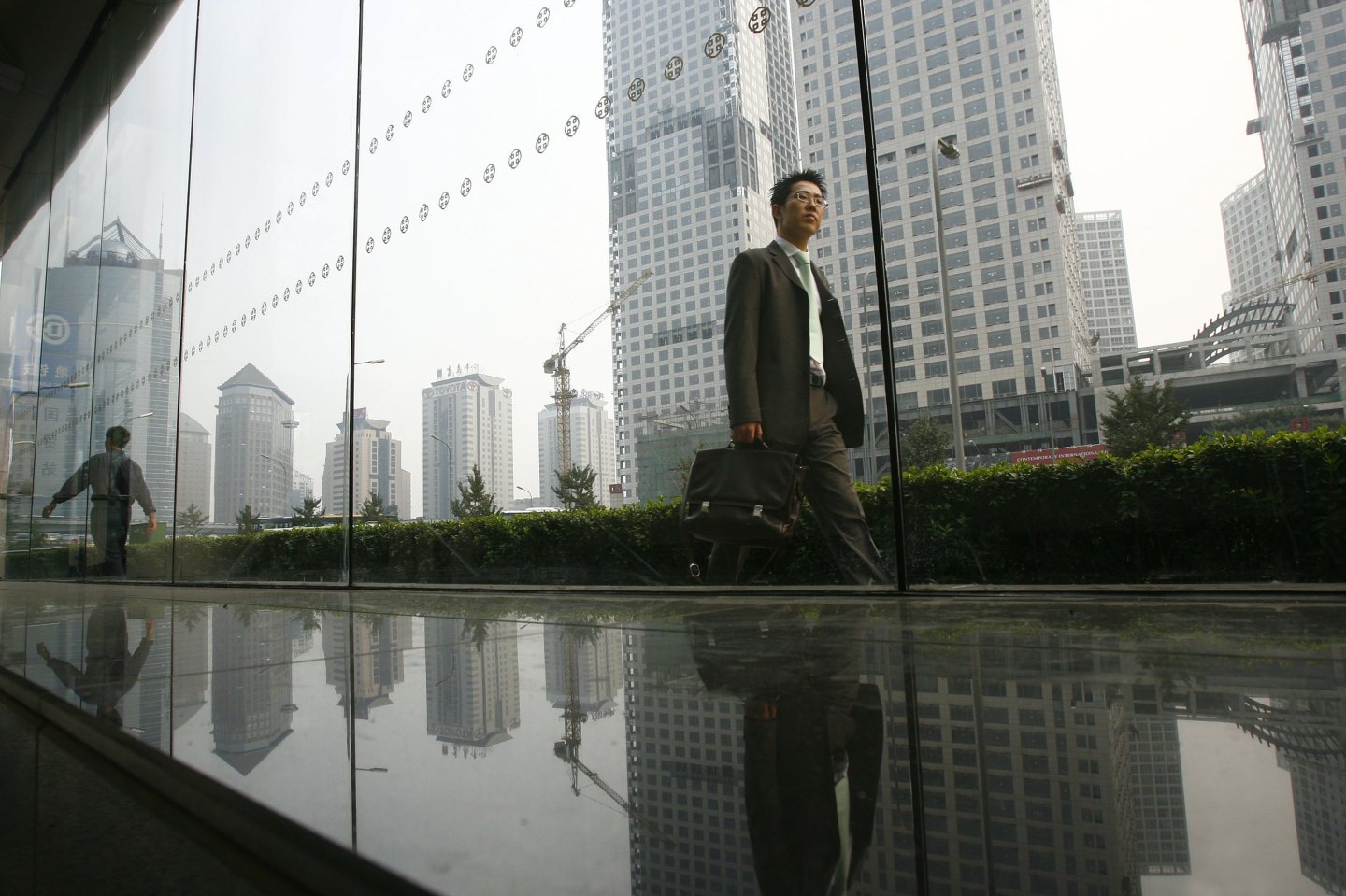 BEIJING, CHINA - SEPTEMBER 14: (CHINA OUT) A man walks past office buildings at Beijing's Central Business District on September 14, 2006 in Beijing, China. China's property market has begun to show signs of cooling with the year-on-year growth of the average price of new units in seventy cities declining from 5.8 percent in June to 5.5 percent in August according to a survey released by the National Development and Reform Commission (NDRC) and the National Bureau of Statistics (NBS). (Photo by China Photos/Getty Images)
China Photos Getty Images

The government will take a multi-pronged approach to cutting company debt, including encouraging mergers and acquisitions, bankruptcies, debt-to-equity swaps and debt securitization, according to guidelines issued by State Council, or the cabinet.

Corporate China sits on $18 trillion in debt, equivalent to about 169% of gross domestic product (GDP).

They also say the government needs to allow more defaults to improve credit allocation and stop wasteful spending in the economy.

High debt levels have added to operating difficulties for some Chinese firms, increasing their debt risks and financial risks, the National Development and Reform Commission (NDRC) said in a document released during a news briefing in Beijing.

“Market-oriented debt-to-equity swaps will be one of the important measures to reduce corporate leverage,” NDRC’s vice chairman Lian Weiliang said during the briefing.

But Lian warned the swaps are not a “free lunch” for troubled companies, adding that loss-making “zombie” firms are strictly forbidden from such exchanges, which will be used mainly to help high-quality firms that face temporary difficulties.

The government also will not be responsible for losses occurred during the swap process in a bid to prevent “moral hazard,” he added.

The government aims to stabilize and reduce corporate debt levels in the near- and medium-term, the state planner said.

China‘s bond markets have worked for years on the assumption that issuers were effectively guaranteed by the state.

Since 2014, though, Beijing has been cautiously trying to change that perception by allowing some issuers to default.

The central bank will create a favorable monetary policy environment for debt reduction, Fan Yifei, a vice governor of the People’s Bank of China, told the briefing.

Banks will be encouraged to transfer bad loans to asset management companies and push forward the securitisation of bad assets, according to the cabinet guidelines.

However, banks cannot be forced to conduct the swaps, Lian said.

His comments were echoed by Dai Bohua, assistant minister at the Ministry of Finance, who said the government will prevent a shift of risks from non-financial firms to banks under the debt-to-equity swaps.

Debt has emerged as one of China‘s biggest challenges, with the country’s total debt load rising to 250% of GDP.

Excessive credit growth in China is signaling an increasing risk of a banking crisis in the next three years, the Bank of International Settlements (BIS) warned recently.

According to a recent Reuters analysis, profits at roughly a quarter of Chinese companies were too low in the first half of this year to cover their debt servicing obligations, as earnings languish and loan burdens increase.

China experimented with debt-to-equity swaps in the late 1990s as part of sweeping reforms to the state sector that led to around 28 million layoffs over five years. But experts said the program made state-owned firms less willing to find ways to pay back debts.