GM’s Hydrogen-Powered Truck Could Be the Future of U.S. Military Missions 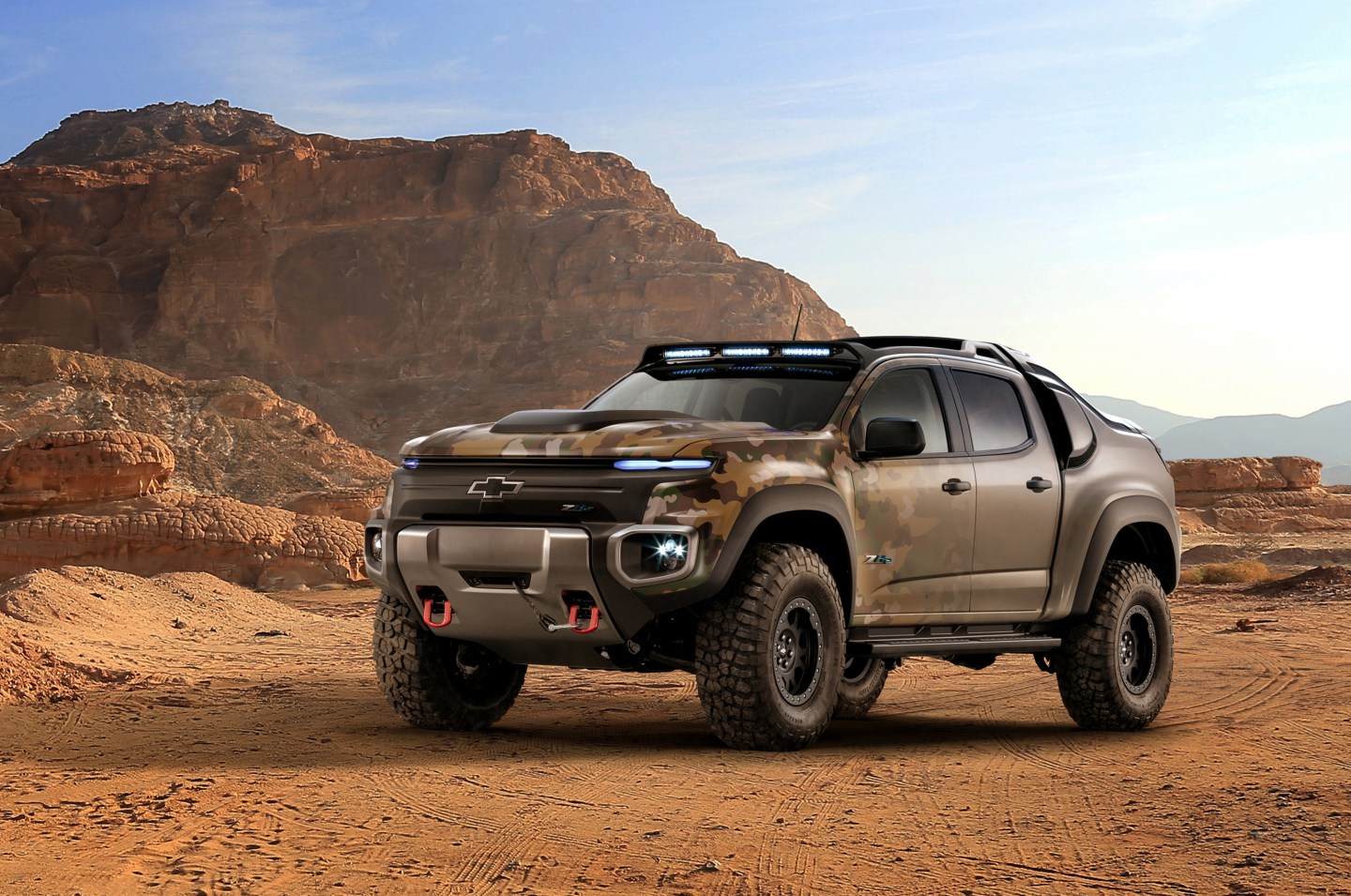 Diesel-powered Humvees have long been the workhorses of the U.S. Army—noisy, fossil-fuel dependent vehicles that have lost a lot of their off-road capabilities due to heavy armor added to make them more resilient to attacks.

But their dominance could be challenged by a futuristic take on the Chevrolet Colorado that’s powered by hydrogen fuel cells, is nearly silent, and even produces water.

The Chevrolet Colorado ZH2, developed by General Motors U.S. Army Tank Automotive Research, Development and Engineering Center (TARDEC), is an extreme off-road-capable fuel-cell-powered electric vehicle. The demonstration vehicle was revealed this week at the fall meeting of the Association of the United States Army.

The Army is going to spend the next year putting the vehicle through extensive and extreme field testing.

The 3-ton vehicle, which is based on Chevrolet’s midsize pickup, is intimidating with its 37-inch tires, reinforced body, and standing at more than 6.5 feet tall and more than seven feet wide. But its the hydrogen fuel cells—and all the benefits that come with that system—that makes it a potential game-changer.

General Motors has been working on hydrogen fuel cells, which convert hydrogen gas into electricity, producing vehicles with greater range than those powered with batteries, for decades.

A vehicle powered by hydrogen fuel cells is silent, produces power efficiently, can be refueled in minutes, and has a lot of torque, Charlie Freese, executive director of global fuel cell activities with GM told Fortune.

The concept vehicle is also equipped with a removable unit that can provide 25 kilowatts to 50 kw of electric power away from the vehicle. This unit works like a generator to power a work site or small field hospital, he added. The fuel cell system also produces about 2 gallons of water per hour as a byproduct.

“These advantages are things we do not have today,” said Jennifer Hitchcock, executive director of research, technology and integration at TARDEC. “The torque really buys back our off road mobility, which we have lost over the years with up-armoring all of our vehicles. We want the mobility back to go off road and go out of the way of the enemy.”

The lack of noise and off-road mobility are other huge advantages, she said.

“One of the issues we have in theater is when we have to take the roads that everyone knows they plant threats. Now when we can off road that gives us a huge advantage in operational scenarios.”

She added that water, besides fuel, is the Army’s biggest commodity that it has to take to the battlefield.

The demonstration vehicle is the latest example of GM’s deepening relationship with the U.S. military. The automaker is working with the U.S. Navy to develop hydrogen fuel cell-powered underwater drones that can operate without recharging for more than 60 days. This unmanned drone could be used for a number of purposes, including research or patrolling waters.