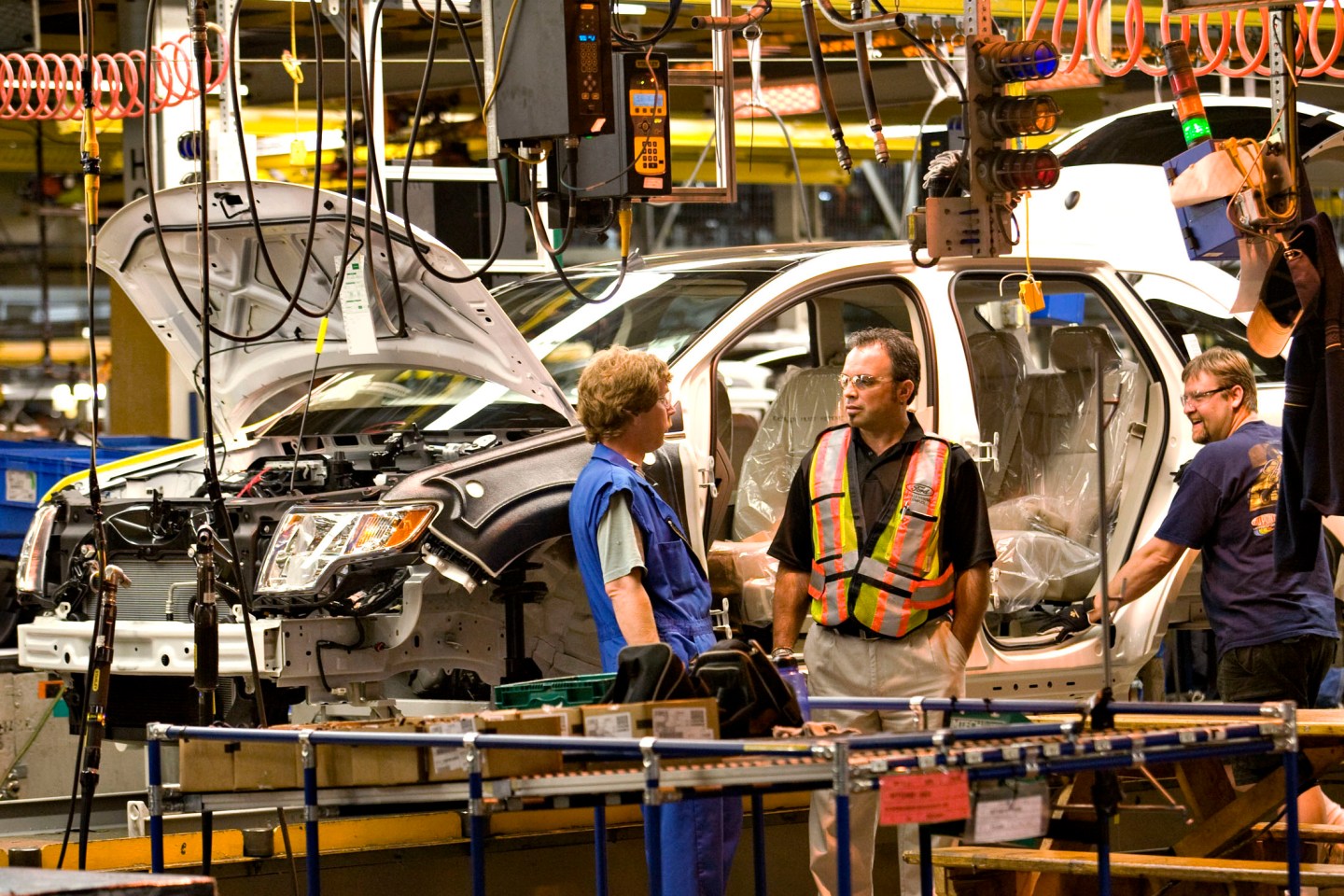 CANADA - JUNE 03: Workers take a break during an unexpected delay on the Ford Flex assembly line at the Ford Motor Co. Oakville factory in Oakville, Ontario, Canada, on Tuesday, June 3, 2008. Ford Motor Co., the world's third-largest automaker, will boost production at the Ontario plant by about 19 percent next year by adding a third shift to build more Flex crossover vehicles. (Photo by Norm Betts/Bloomberg via Getty Images)
Bloomberg Bloomberg via Getty Images

Workers at a major Ford Motor Co plant in Ontario are unhappy with a contract their union reached with General Motors Co and would likely vote down a similar agreement, a senior local union official said on Monday.

“That framework that GM has set forward won’t ratify in Oakville,” he said in an interview. “My members have huge concerns.”

The local makes up the majority of Ford’s unionized Canadian workforce, giving it a strong influence in a ratification vote.

Unifor has a longstanding practice of “pattern bargaining,” selecting one automaker to negotiate with and then holding the other two to the terms of that deal. It reached an agreement with GM last month.

It is not clear how national union officials could address Thomas’s concerns without deviating from the pattern.

“We’ll deal with Ford when we get there,” said Unifor National President Jerry Dias. “The 707 leadership is listening to their members, and so we’ll see where that takes us.”

Dias said there were always some differences among the automakers, noting that in the last contract, GM was allowed to hire some temporary employees. But he said he remained committed to pattern bargaining.

Any Ford vote is weeks away, as Unifor officials have yet to reach a tentative agreement with the company. The union is currently bargaining mainly with Fiat Chrysler Automobiles NV and has set a strike deadline for Oct. 10.

The GM deal maintained a 10-year earn-in for new hires, while spreading out raises so some workers get pay boosts earlier than before. But the core of the deal was a commitment to invest C$400 million ($305 million) in the GM Oshawa assembly, saving jobs at the plant.

Ford’s bargaining committee is looking for new investment at the company’s Windsor, Ontario, engine plants, but Oakville, which won the new Ford Edge crossover in 2014, does not need new commitments in the short term.

Oakville workers outnumber Windsor’s 5,000 to 1,700 and could reject any deal on their own.