VW CEO Hopeful of Deal With U.S. Authorities By End of the Year 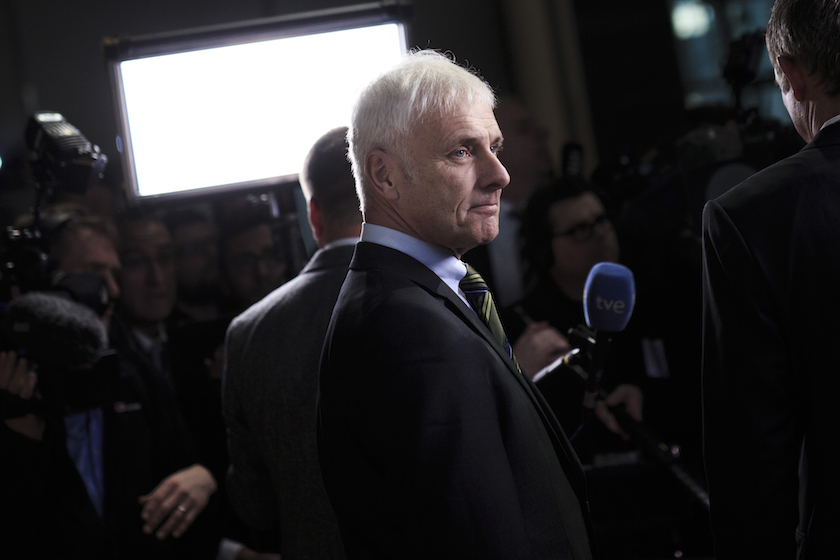 Volkswagen Chief Executive Matthias Mueller said on Wednesday he is hopeful the German automaker can reach agreement by the end of the year with the U.S. government on the size of a fine to settle a criminal investigation of the company’s alleged violations of U.S. clean air laws.

Mueller, speaking on the sidelines of the Paris Motor Show, said he also sees “good progress” toward an agreement with U.S. regulators that could allow Volkswagen to repair certain 3.0 liter diesel engines that emit more pollutants than U.S. law allows.

Speculation that the U.S. Justice Department will demand a multibillion-dollar fine to settle a criminal investigation of the automaker’s use of illegal software to deceive U.S. environmental regulators sent Volkswagen shares into a tailspin earlier this week.

Mueller told reporters “we have been in a constructive dialogue with authorities in Germany, in Europe and the U.S. for the past 12 months,” and said he hopes to know the results of all the investigations “in the foreseeable future.”

A Justice Department spokesman declined to comment. Reuters reported in August that Volkswagen and the U.S. Justice Department have held preliminary settlement talks about resolving a criminal probe into the automaker’s diesel emissions scandal, citing two sources briefed on the matter. The talks have continued in recent weeks but it is not clear when a settlement will be reached.

Earlier this month, a Volkswagen engineer pleaded guilty to one count of conspiracy in connection with the diesel emissions cheating case, and said he will cooperate with the Justice Department investigation.

VW in June agreed to pay up to $16.5 billion to resolve civil litigation related to the emissions cheating. The company agreed to buy back vehicles if they could not be repaired as required by U.S. and California regulators, and to fund projects such as expanded electric vehicle charging networks.

Mueller said he is concerned about the size of potential additional fines. “The settlement that we have … reached with the civil authorities isn’t cheap,” he said. “We have made provisions for everything that we believe we will have to face, including fines, environmental projects, compensation to the people … We will have to see if that’s enough or not.”

Volkswagen has set aside 17.8 billion euros ($20 billion) to pay for costs related to the global emissions cheating scandal. The company faces civil litigation and potential fines from government regulators in the EU and other markets around the world.

Mueller said on Wednesday the company faces more than a financial toll. “We gambled away the trust people had in us and now we have to see how to get it back. That will definitely take longer than it took to lose it.”

Mueller and Volkswagen global brand chief Herbert Diess said the company is not ready to abandon diesel technology, and could continue to offer diesel models for the U.S. market.

“At some point there will be a tipping point, where electric mobility will gain the upper hand. I don’t know when this will be. Maybe 2030 or 2035,” Mueller said.

“How many cars do they sell per year? How many? Fifty thousand per year,” he said. “Do you know how many Volkswagen sells? 10 million! Why do we then talk of competition?”