India Could Get Billions from the U.S. To Build a Nuclear Reactor 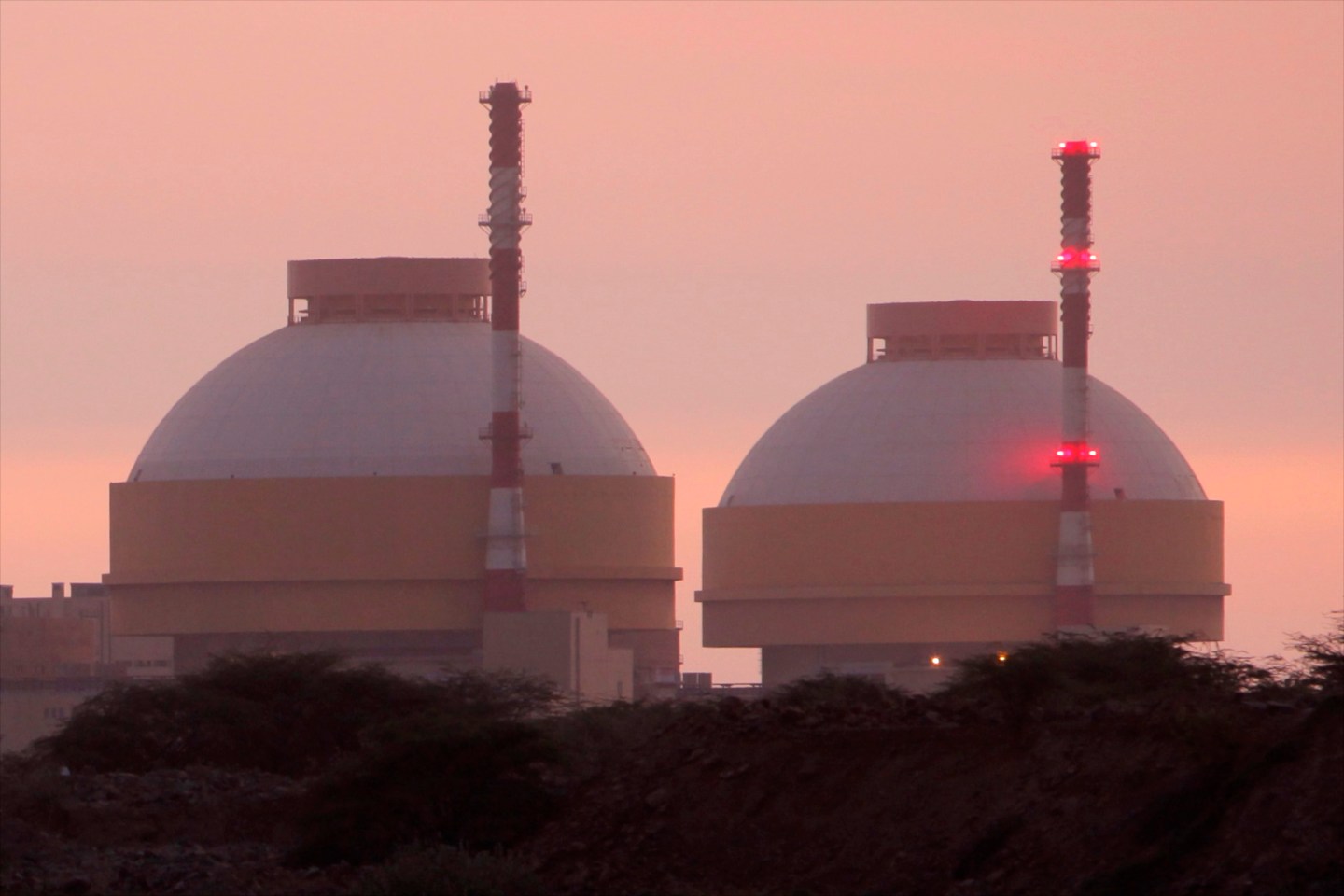 Nuclear Power Corp.'s Kudankulam plant is seen from Tsunami Nagar, India, on Saturday, Oct. 1, 2011. India will form a panel of government officials and experts to address the safety concerns of villagers living near the almost completed nuclear power station at Kudankulam in Tamil Nadu state, where protests have halted work.
Photograph by Adeel Halim—Bloomberg via Getty Images

India is negotiating with U.S. Export-Import Bank for an $8-9 billion loan to finance six Westinghouse Electric nuclear reactors, two sources familiar with the talks said, although a lending freeze at the trade agency threatens progress.

The mega-project, the result of warming U.S.-India ties in recent years, could open up billions of dollars of further investment in India’s nuclear power sector, which was for decades shut out of the global market.

India now targets a tenfold expansion in capacity to 63,000 MW by 2032, and U.S., French, and Russian companies are among those chasing the business.

The Westinghouse deal, however, is contingent on financing and Ex-Im cannot approve loans of more than $10 million, owing to a row in the U.S. Congress over board appointments stemming from a campaign by conservatives to close the government lender.

Only two of five seats on Ex-Im’s board are filled and the appointment of a third director—the minimum needed to clear board decisions—is on hold due to opposition from the Senate Banking Committee chairman, Republican Richard Shelby.

“Financing of the reactors is the critical piece; everything is down to this,” said one source involved in protracted negotiations to build the reactors in the south-eastern Indian state of Andhra Pradesh.

The source, requesting anonymity because of the sensitivity of the talks, said Indian negotiators and Ex-Im officials were trying to set the terms of the financial package in the hope that the freeze on the bank, affecting potential sales of several major U.S. companies, would lift soon.

Westinghouse is owned by Japan’s Toshiba Corp but is based in the United States.

In addition to U.S. Ex-Im, India is also seeking funding from Japan and South Korea for the reactors to be built in Kovvada, two sources familiar with the talks said.

Ex-Im had asked a South Korean export credit agency if it would be interested in partly financing the Westinghouse deal, since some of the nuclear equipment and materials are expected to come from South Korea, an official at the agency with direct knowledge of the discussions told Reuters.

The agency was willing to fund a part if a Korean contractor was involved, with Ex-Im providing the majority of the total, the official said.

The U.S. bank had not made any request to its Japanese counterpart to extend loans to the nuclear project in India, a source with direct knowledge said in Tokyo.

Both U.S. President Barack Obama and Indian Prime Minister Narendra Modi have been promoting the nuclear deal, which was stuck for years because of an Indian law that made nuclear equipment suppliers liable in case of an accident, and not just the plant operators as is the global norm.

India has since set up an insurance pool to indemnify suppliers, and both Westinghouse and India’s state-run operator Nuclear Power Corporation of India (NPCIL) are working to a June 2017 deadline to sign the contract laid down by Obama and Modi.

“The goal right now is to get that financing done during President Obama’s tenure, knowing full well that it may or may not stick in a new administration following the … presidential election,” said industry veteran Vijay Sazawal, principal of International Atomic Energy Consulting in Washington D.C.

While negotiators are unlikely to nail down a contract under Obama, who steps down in January, their challenge will be to come up with concessional financing terms that will make Westinghouse’s AP1000 reactors affordable.

Westinghouse did not respond to a request for comment, while a U.S. Ex-Im Bank spokeswoman declined to comment. An NPCIL official said the firm had nothing to say at this stage.

Democratic lawmakers in the U.S. Congress were pushing this week to include a provision in a must-pass spending measure that would lift the board quorum requirement for deals above $10 million.

But negotiations between party leaders were dragging on and congressional aides and lobbyists said on Tuesday it was unclear whether the Ex-Im provision would prove too controversial to make it into the final spending extension package, needed to avoid a government shutdown on Oct. 1.

The deal with Westinghouse would be the first since a landmark 2008 U.S.-India nuclear pact that allowed New Delhi access to foreign technology and finance even though it has not signed the nuclear Non-Proliferation Treaty and runs an active weapons program.

Under the rules of non-proliferation, no U.S. or Japanese firm could engage in nuclear trade with a non-signatory, but since Washington made an exception for India, Tokyo has also signaled its assent.

The nuclear agreement crafted by the George W. Bush administration was seen initially as an attempt to build India into a military and economic power to counter China, but has since become linked to Washington’s effort to wean major economies such as India off fossil fuels to cleaner forms of energy.

India is also in talks with Russia to build four more reactors on top of the two already completed in Kudankulam in southern Tamil Nadu state, as well as with France’s EDF for the construction of six reactors of 1650 MW each in western India, which would be the world’s biggest nuclear power complex.

But talks with Westinghouse are more advanced than those with the French, with the two sides aiming to sign an early works agreement next month, sources familiar with their progress said.

A delegation from the U.S.-based firm visited New Delhi earlier this month to finalize the pact that would include the timeline and up-front costs such as land acquisition and site preparation, said a source familiar with the matter.