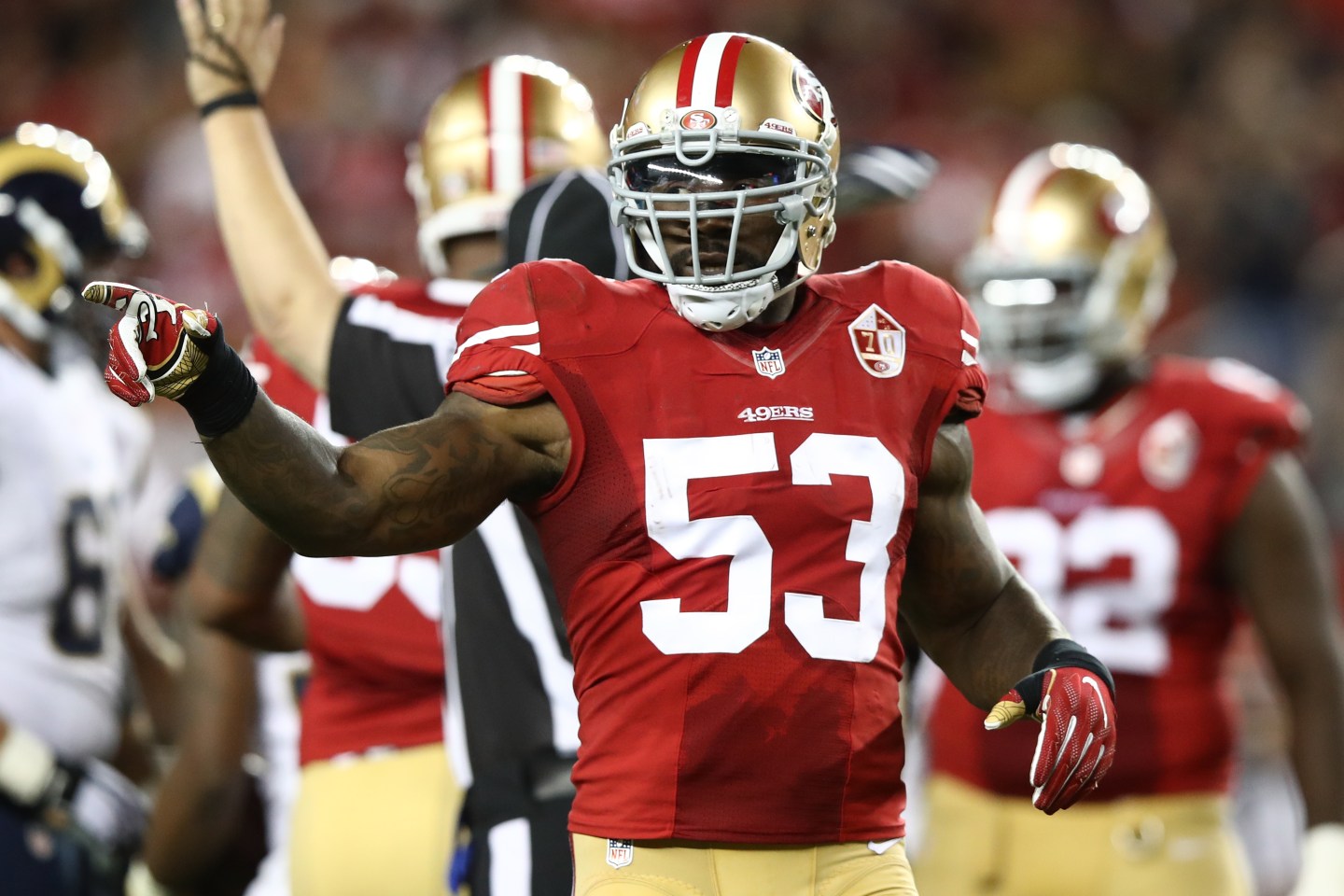 NaVorro Bowman #53 of the San Francisco 49ers reacts after a play against the Los Angeles Rams during their NFL game at Levi's Stadium on September 12, 2016 in Santa Clara, California.
Photograph by Ezra Shaw—Getty Images

Twitter has been experimenting with live video for some time now, with ventures like its Wimbledon stream earlier this year. But the biggest deal by far was Thursday night’s stream of an NFL game between the Buffalo Bills and the New York Jets.

The live video offering, which was free of charge, was the result of a $10 million agreement between the service and the NFL, which the two signed in April.

The company is hoping that its aggressive moves into live-video streaming will help it boost both its user base and eventually its advertising revenue, which in turn might help its lackluster share price (TWTR) (which was up 5% at one point on Friday).

Twitter has signed additional deals with Major League Baseball, the National Hockey League, and Bloomberg for future offerings, so the NFL stream was a big test of its ability to provide a good experience.

So was Thursday’s event a sign that Twitter is turning things around and headed for glory again? Not really. But it was a strong performance for a first attempt, albeit one with lots of room for improvement. Here’s a run-down of the positives and negatives:

1) It mostly worked: Put simply, the Twitter NFL stream worked, which is saying something for a live video stream that is going out to millions of viewers on everything from old smartphones to janky web browsers. There were complaints about lag, but that’s not uncommon. Mostly, it worked. Whether Twitter can maintain that track record for future events is an open question.

2) People liked it: There were a lot of genuinely positive reviews for the experience, not just from Twitter fans (and investors) like Fred Wilson of Union Square Ventures, but from regular users as well. Some even said the stream was “the future of live TV,” and that they would love to see other events such as the Oscars in a similar fashion.

the #TNF thing blows the door off for other tv/special programming partnerships. i mean, this is where the oscars should be.

3) No friction: The NFL stream was free not just to registered Twitter users but to anyone with a Twitter app or who chose to visit the Twitter website. You didn’t have to log in or register with your Twitter credentials to see it, and you didn’t have to prove that you were an NBC or a CBS subscriber, which many live streams do.

2. Much easier to download Twitter than to authenticate with network app. Any user traction gained is because of this

4) No garbage: One issue whenever there’s a live event is that hashtags get hijacked by spammers and trolls, and the stream of tweets can get clogged with garbage. Twitter clearly used both human editors and its algorithm to keep the tweet-stream as clean as possible, in order to make it more like TV and less like, well, regular Twitter.

5) Good demo: One of the things Twitter was trying to do with the NFL stream was show that it can not only be a second screen for such experiences, it can be a first screen as well—i.e., the main place people go to watch, where they can also see and interact with people about the event. That’s always been Twitter’s core value proposition, and it looked good.

1) Too random: One of the main issues many users mentioned with the event was that the stream of tweets that showed up beside the video of the game were a jumbled mess of random comments. This might simulate the chatter you get in a sports bar, but it would be better if Twitter could either give users access to their own feeds or curate the tweets effectively.

2) No opt out: If you wanted to just watch the stream and not see the tweets, there was no real way to do that. Obviously, part of the idea behind the event from Twitter’s point of view was to show people how tweets can add to the experience, but those who wanted to turn the tweet-stream off and just watch the game are part of the potential audience too.

3) Not unique: As more than one person noted, the stream that Twitter was showing was the exact same video that NBC and CBS were showing on their regular TV channels for free (which is why it was able to get the rights to the stream for only $10 million). That made it somewhat less compelling an offering, especially for non-Twitter users.

4) Low value: For all Twitter’s hopes about boosting ad revenue, it’s questionable how much value advertisers are going to get by being there. The company was reportedly asking between $1 million and $8 million for all 10 Thursday night games, but some advertisers were reluctant. Why? Likely because they could get a lot more bang for their buck on regular cable. According to one estimate, Twitter’s stream had an average viewership of just 243,000 while the TV broadcast drew more than 15 million simultaneous viewers on average.

Twitter's NFL thing was pretty cool .. but remember they are paying for it. The idea is to get *others* to pay for it. Revenue = good.

5) Not enough: For Twitter, the NFL stream no doubt feels like a huge success. But the company is still fighting an uphill battle against a massive competitor—namely, Facebook—with literally billions of dollars to spend paying people to produce video and paying providers to give it the rights to their streams. That’s a rather large hill to climb.

The bottom line is that the NFL stream went well, and showed that Twitter has a lot of potential as a place for live video. Now all the company needs to do is show that it can replicate that with baseball and hockey and coverage of the election, improve the curation experience, and make a pile of advertising cash while doing so.