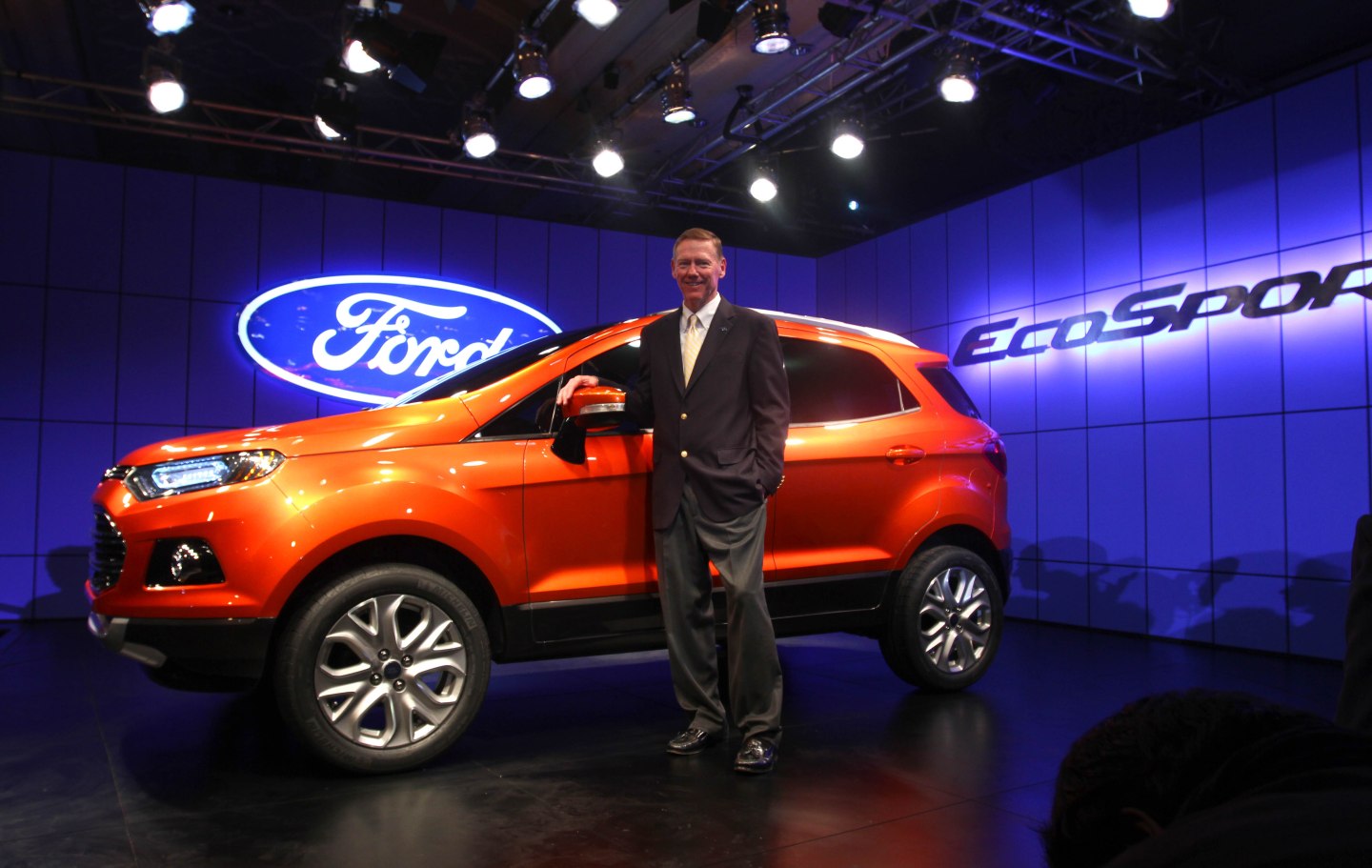 India and China were expected to be the main manufacturing hubs for the new B500 range, slated to begin production in 2018 and to include a premium sedan, hatchback and sport utility vehicle (SUV), two sources with direct knowledge of Ford’s plans told Reuters.

The automaker had also planned to build its new models in Brazil, Russia, and Thailand, one of the sources said.

Ford’s decision, communicated to its suppliers in July, follows a similar move by General Motors (GM) to postpone the launch in India and China of a new $5 billion family of compact vehicles, said two sources familiar with GM’S thinking.

Ford’s program is on ice because of muted demand for some of its small and mid-sized hatchbacks and sedans in India and China, where SUVs and “crossovers” combining the hatchback and SUV have proved increasingly popular.

The cost of upgrading plants to produce the new cars would also be prohibitively high, the sources following Ford said.

All of the sources declined to be named as they have not been cleared to discuss the plans publicly.

“We are constantly evaluating opportunities to better meet the needs of consumers and do not comment on speculation about future product programs,” a Ford spokesman said in a statement.

That said, Ford has invested over $2 billion in India and plans to spend more to set up a global engineering center in the southern city of Chennai that will help tweak products for the local market and more swiftly adapt to changing consumer trends.

The carmaker is also ramping up exports, including to Europe, to maximize usage of its two plants in India.

“India is a key market for us in Asia Pacific,” said the spokesman, adding that the carmaker is committed to introducing new products and technologies in the South Asian nation.

But instead of the more ambitious plan for the key markets of India and China, Ford will focus on updating existing models and develop and build more SUVs and crossovers, moving away from sedans and hatchbacks, according to two separate U.S. sources with knowledge of the company’s plans.

That would allow the carmaker to boost profit margins.

“It makes more sense for them to refresh older products now, harness lower development costs in China in the mid-term, and move toward small crossovers over the long haul.”

Chinese buyers have flocked to SUVs, as they grow wealthier and are often restricted to one vehicle in major cities, at the expense of contracting sedan sales.

SUV sales rose 52% last year, although a glut of new model launches in the segment is already leading to discounts and lower margins.

Setback for “Make in India”

The retreat by Ford and GM is a setback for India’s “Make in India” push to become a global manufacturing powerhouse, including in the auto sector.

Retooling the assembly line to build the B500 vehicles at Ford’s plant in Gujarat, Prime Minister Narendra Modi’s home state, would have meant an investment of more than $100 million and created manufacturing jobs as it cranked out more cars.

Ford and GM have struggled to crack emerging markets in Asia, where competition from Japanese, South Korean and now Chinese automakers is fierce.

GM shut production in Indonesia owing to its modest market share, and Ford also plans to close its operations in the Southeast Asian nation, as well as in Japan and Australia.

Dearborn-based Ford is now looking at each country in the region in terms of long-term profitability opportunities, said another source familiar with Ford’s plans, while noting India remains a tough place to make money.

Maruti and Hyundai control two-thirds of the market whereas Ford’s share in India, set to be the world’s third-largest car market by 2020, has stagnated at about 3%.

Until Ford finalizes an alternative plan, the shift in strategy could leave gaps in its car portfolio in India, that today sits at the two ends of the price and size spectrum.

In the meantime, Ford is increasing its focus on driving down costs by sourcing more parts locally and using more common features across models to achieve economies of scale.