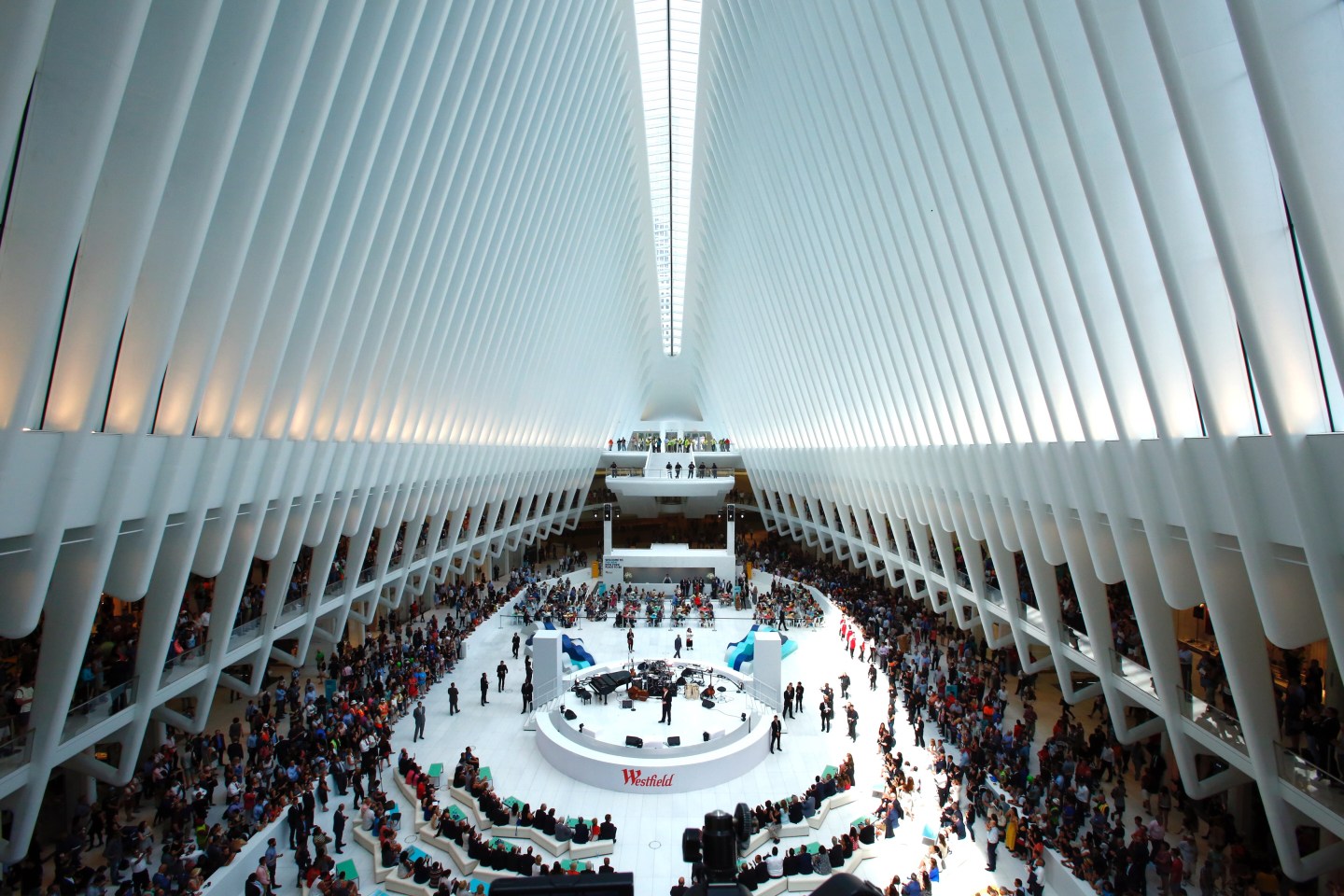 The mall, located in the WTC’s concourse inside a major mass-transit hub in Lower Manhattan, is also a good illustration of how mall developers such as Westfield and rivals Simon Property Group (SPG) and General Growth Properties (GGP) are looking to reinvent malls in an era of declining traffic at many such locations.

Westfield sought to make the WTC mall stand out by lining up tenants such as the second Manhattan location for Eataly, the Italian-themed food and beverage marketplace, an Apple (AAPL) store and Ford’s (F) upcoming FordHub, a showroom for innovations that is not however a dealership.

There are about 50 stores in the mall that don’t have another location at any of Westfield’s other centers, reflecting the developer’s desire to not just offer the same old tenants shoppers can find at hundreds of other malls.

The 365,000-square-foot center will have more than 100 stores, with about 60 opening Tuesday and the rest by year-end. The WTC mall is in the Oculus, the centerpiece of architect Santiago Calatrava’s $3.9 billion commuter terminal, used by 300,000 commuters daily.

“This lends itself to doing things way beyond what we’ve done typically in the traditional malls we currently own,” Bill Hecht, operations chief for Westfield U.S. told Fortune in an interview at the opening.

Westfield executives project that World Trade Center will generate some $1,500 per square foot, compared to $903 a square foot in 2000 at the mall that was initially at the site. That is also three time the average for a typical suburban regional mall. Westfield, Simon and GGP have all been shedding weaker malls and investing in their better malls with upgrades and more modern amenities.

The mall is in a complex that connects the Port Authority Trans-Hudson trains from New Jersey with New York’s subways, guaranteeing a steady stream of commuters. And its location near the memorial, museum and observatory at 1 World Trade Center, means tons of tourists will come too: Westfield anticipates some 15 million global travelers to visit the area annually. The developer expects the mall to generate about $1 billion in annual sales volume.

Such shopper traffic meant the Australian developer didn’t need to line up an anchor tenant to bring in shoppers, such as a Macy’s (M) or a Nordstrom (JWN) does in a suburban mall.

“We didnt think we had to,” Hecht says of lining up a department store anchor, much as Brookfield Property Partners did at the mall next door, where that developer will open a Saks Fifth Avenue store this fall. “It’s a much tougher deal economically to have a department store.” Department stores have traditionally paid almost nothing in rent to mall developers because of their status as traffic magnets, something that has grown shakier in recent years.

Westfield was mindful about not having the same tenants as neighboring Brookfield Place, which skews closer to luxury with stores like Hermès and Gucci but also has tenants like J.Crew. At the same time, it’s such a hot area, full of tourists, office workers and affluent locals (nearby TriBeCa is the wealthiest zip code in Manhattan) that Westfield is not overly concerned with overlap.

“There is enough business in Lower Manhattan for both us,” Hecht said.