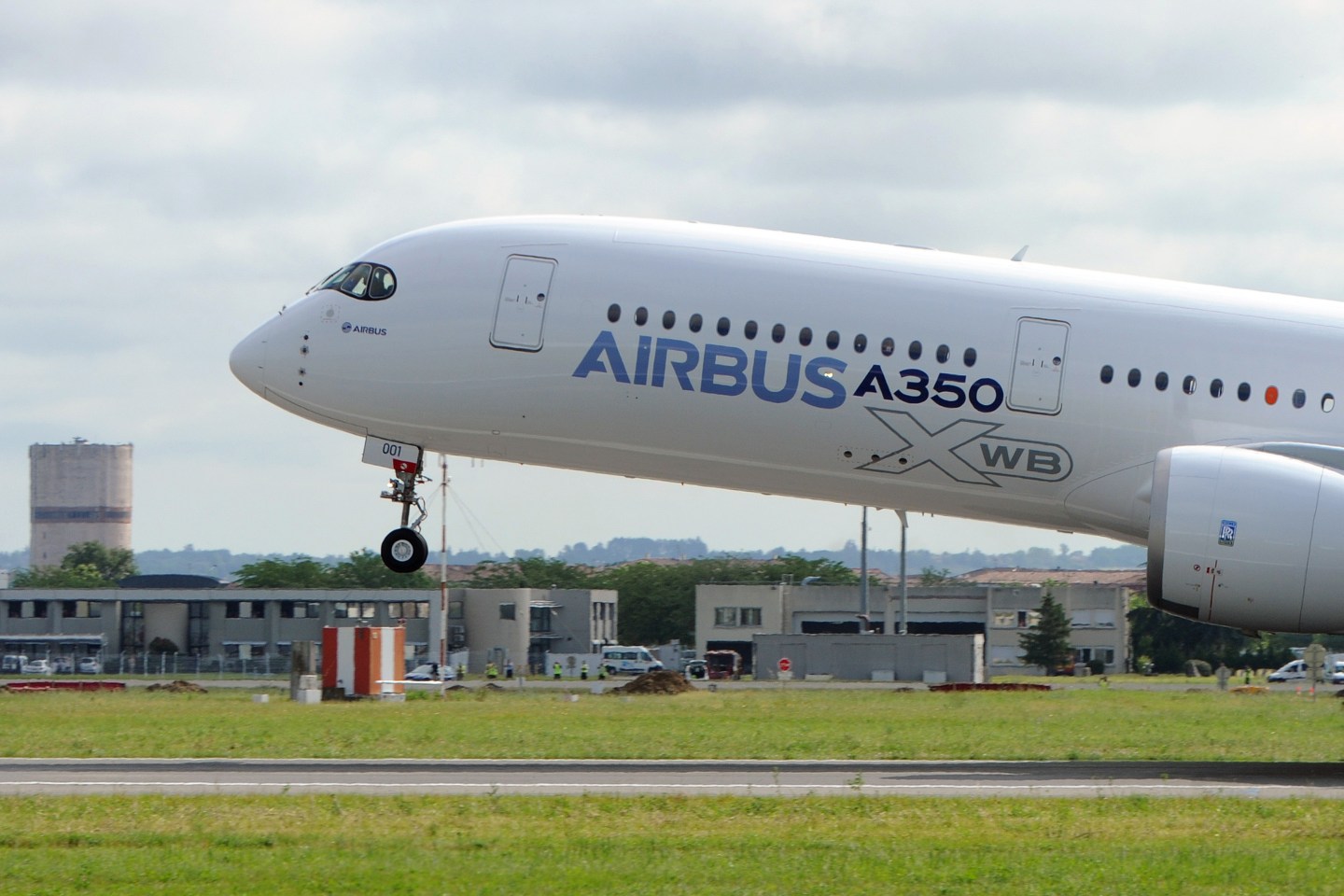 Airbus's next-generation A350 plane takes off from Toulouse-Blagnac airport, southwestern France, on its first test flight on June 14, 2013, in a milestone for an airliner that the firm hopes will challenge Boeing's 787 Dreamliner in the lucrative long-haul market. The A350 -- more than half of which is made of light composite materials that reduce fuel costs -- was crewed for its maiden flight by a British and a French test pilot assisted by a flight engineer and three other engineers at the back. AFP PHOTO / ERIC CABANIS (Photo credit should read ERIC CABANIS/AFP/Getty Images)
Photograph by Eric Cabanis—AFP/ Getty Images/ File

The world’s two largest jetmakers are bracing for the next round in a transatlantic spat over billions of dollars of aircraft subsidies, amid accusations of widening U.S. support for Boeing and persistent European aid to Airbus.

After a year-long lull, the world’s biggest trade dispute will enter a crucial phase in coming months, potentially casting a shadow over faltering efforts by the European Union and United States to negotiate a wider free-trade deal.

At stake are mutual claims of unfair subsidies to the two planemakers that raise the prospect of $22 billion a year in threatened trade sanctions, though many say a resolution remains years away and could ultimately involve a negotiated settlement.

The dispute, said to be the biggest in terms of value and time, dates back to 2004 when the U.S. urged the World Trade Organization (WTO) to act against European government loans to help Airbus develop jets such as the A380, followed by a counter-claim from the EU over federal and local aid for Boeing.

See also: How These Fortune 500 Companies Are Moving to the Cloud

In separate rulings, the WTO found that both planemakers had benefited from billions of dollars of unfair subsidies.

The case is now bogged down in arguments over whether each side complied with orders to withdraw illegal subsidies and undo the effects of the majority of aid which, although not banned, can be challenged if it can be proved to be damaging.

After a three-year delay due to the strain placed on its resources by the marathon dispute, the WTO is expected to rule within weeks on whether the EU obeyed its rulings, followed by a similar report on U.S. compliance early next year.

Both sides claim the other ignored the thousands of pages of judgements and appeal findings in each case and have sought WTO permission to draw up sanctions, with the U.S. calling for up to $10 billion in counter-measures and the EU $12 billion.

U.S. sources have said they are confident the WTO will find the EU flouted its decisions, while the European side has called U.S. accusations “empty.”

Together, the cases affecting tens of thousands of aerospace jobs are seen as the biggest test of a multilateral system for resolving trade disputes since the WTO was founded in 1995.

Any sanctions could further complicate relations as the U.S. and EU remain bogged down in differences over a proposed Transatlantic Trade and Investment Partnership (TTIP), amid growing anti-trade sentiment on both sides of the Atlantic.

As the two existing Airbus-Boeing cases that have dominated the WTO’s disputes forum for more than a decade creep towards a conclusion, a third WTO dispute affecting the world’s two largest planemakers is simultaneously gathering pace.

Last year, the EU complained that Boeing was set to receive unfair support for its latest plane, the 777X, from Washington state thanks to an $8.7 billion package of expanded tax breaks.

See also: WhatsApp and Skype May Be More Heavily Regulated in the EU

In a confidential draft report, a WTO panel found Boeing would get some fresh subsidy from the tax decision, although it rejected several EU arguments, three people familiar with the case said.

One European source called it an important win for the EU.

A U.S. source denied this, saying claims that the EU is poised to win the case are “false,” and a distraction from its inaction over earlier WTO rulings, but declined further comment.

No publication date has been set for the interim findings, but they are typically released a few months after parties see a copy.

See also: One of the Most Famous Airplanes Ever May be Permanently Grounded

Previous WTO rulings on aircraft subsidies have been bitterly disputed, with both sides finding support for their arguments in the trade body’s decisions and there are no signs that this report will be any different when it is published.

In parallel previous rulings, the WTO found both sides had doled out subsidies worth billions of dollars to their leading planemakers, sparking feuds between Airbus and Boeing over which side had won a greater percentage of the arguments in each case.

The latest dispute over Washington tax measures adds a third pillar to the sprawling trade dispute and, just like earlier cases, is expected to take years of legal arguments and appeals.

The EU argues that the 2013 package of preferential business tax rates, tax credits and tax exemptions represented subsidies to Boeing in return for securing the coveted 777X jetliner work.

It also claims the support falls into the WTO’s most severe category, that of “prohibited” subsidies, because it depends on the use of domestic over imported goods.

U.S. industry sources argue the measures are available to any aerospace company in the state, including even a few suppliers to Airbus, and don’t fall into the WTO’s subsidy net.

Washington state’s 2013 tax package for aerospace companies is largely the same as an earlier 2003 package, which the WTO found caused “serious prejudice.”

The 2013 law extended all of the 2003 benefits from 2024 to 2040, and added exemptions for sales and use taxes on new plants used to manufacture airplanes, wings or fuselages.

In 2011, the WTO ruled earlier versions of the incentives from Washington state were subsidies that caused “serious prejudice” to Airbus, but rejected Europe’s claim that they crossed the line of support that is prohibited automatically.