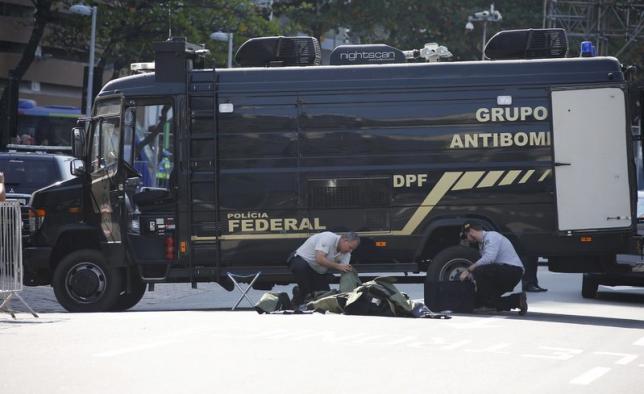 Bomb squad agents control the area near the finishing line of the men's cycling road race at the 2016 Rio Olympics after they made a controlled explosion, in Copacabana, Rio de Janeiro, Brazil August 6, 2016. REUTERS/Eric Gaillard
ERIC GAILLARD REUTERS

A loud blast shook the media seats near the finishing line of the men’s cycling road race on the first day of the Rio Olympics when Brazil’s bomb squad detonated an unattended backpack on Saturday, amid tight security at South America’s first Games.

A Reuters witness reported seeing bomb squad agents in protective clothing operating near the area where media were seated on the boulevard of Copacabana beach. That followed the detonation of another unattended bag near the same spot on Friday evening during the opening ceremony for the Games.

A spokeswoman for the public security department said that officials believe the bag may have belonged to a homeless man, but protocol requires any unattended objects to be destroyed.

Lorie Schmetterling, who traveled from Moorestown, New Jersey with her husband Eric to cheer on their daughter Laura, who is rowing for the U.S. Olympic team, had not heard the blast but was disturbed to learn it had occurred just a few hundred meters from where she was staying.

“You hear all these terrible things about how it is going to be and then you get here and it seems fine,” she said. “Then this happens and you feel it, you go on high alert again.”

Schmetterling said the incident would not alter her plans in Rio.

Brazil Plans Emergency Funds for Rio Ahead of Olympics

A security source said that officials were particularly concerned about this bag because it was close to the Russian hospitality site for the Games.

Brazil detained 12 people for suspected links to Islamic State last month but it has insisted that the risk of an attack at the Games is minimal.

Brazil has deployed some 85,000 police and military to guard the Games, roughly twice the number at the 2012 London Olympics.