How Tim Kaine’s Record on Guns Helps With Women Voters 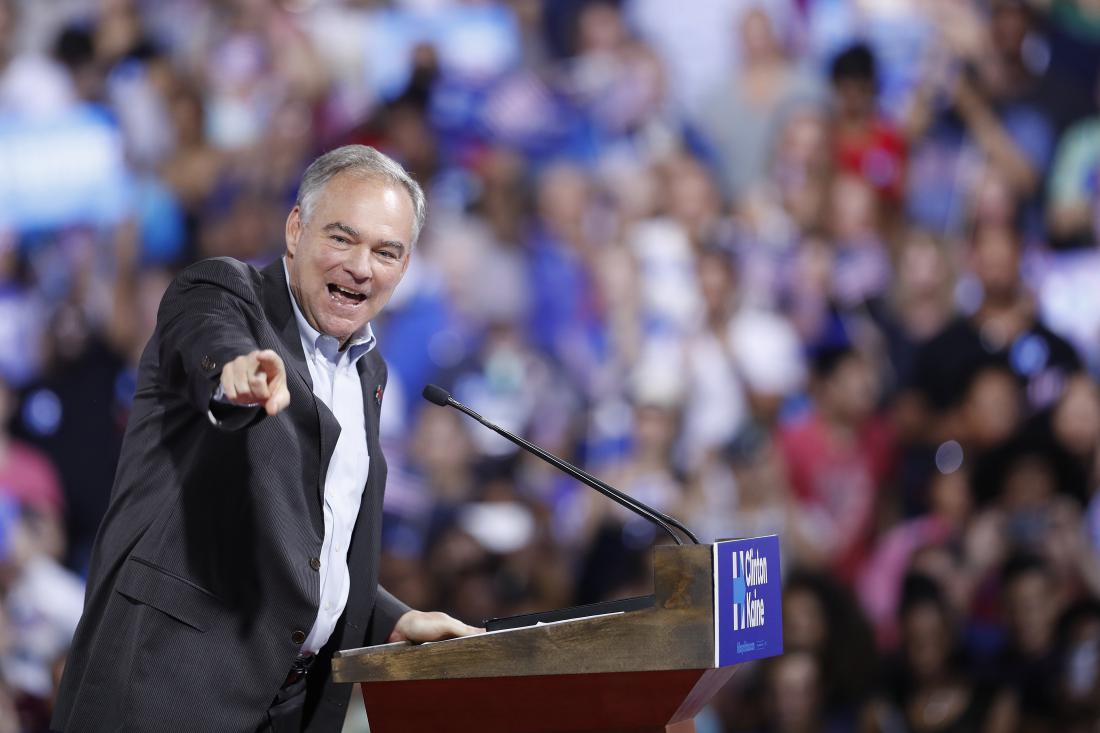 When Hillary Clinton introduced her running mate to the nation, it was remarkable what topic got the crowd most excited: Gun rights. Just the mention of the National Rifle Association Saturday prompted the room in Miami into a roar.

This was, after all, the fight they wanted. Please, some thought, keep talking about guns. It was a fight that strategists saw as an upside: It calmed progressives’ furor over Kaine, seen in some circles as too moderate for a party still overcoming a passionate swoon with Bernie Sanders. And the subject of guns has a proven appeal for a crucial Clinton voting blocks, especially suburban women, who have shown themselves to be lukewarm on some of her other proposals.

“Tim has a backbone of steel. Just ask the NRA. Over and over again he has had the courage to stand up to the Gun Lobby in their own backyard,” Clinton said on Saturday afternoon. “He has fought for common sense gun reform.”

Kaine joined in shortly after, noting his tenure as Governor that saw the massacre at Virginia Tech, once the deadliest mass shooting in American history. “This issues is very close to my heart, very close to my heart. Many of you here feel exactly the same way after that tragic shooting in Orlando in June. We can do better, folks,” Kaine said. “Hillary and I will not rest. We will not rest until we get universal background checks and close loopholes. … It’s so easy.”

People close to Kaine say he has long opposed free-for-all guns. He’s no absolutist on the Second Amendment—in either direction—but he has throughout his career said common sense has a place in interpreting the nation’s founding document, which was created in an era of muskets and bayonets.

“A Virginian, James Madison, drafted the Bill of Rights, and we in the Commonwealth believe strongly in the Second Amendment,” he wrote in a 2013 op-ed for The Virginia Pilot. “But just as we know that the First Amendment’s protection of free speech gives no protection to slander or child pornography, we also understand that the individual right to bear arms is tempered by a responsibility to society.” In that, he has a mesh with Clinton, even if there are differences in just how far and how quickly a Clinton administration would go.

For more on Clinton’s track record with gun control, watch:

Taken as a governing move, Clinton’s selection of Kaine makes sense. The most obvious—and honest—explanation is that she sees him as ready to step into the Presidency should she leave it. She respects and likes him, and her top worry was a learning curve that, in her mind, America can’t risk. Kaine is a veteran politician, having won statewide as governor and senator in the purple state of Virginia. His gun record is an added political bonus.

Suburban white women are with Clinton when it comes to guns but they aren’t yet entirely sold on her candidacy. Part of her problem is that she stayed with husband Bill Clinton after he admitted an affair. Part of it is that she talks a good game but also says she’s open to compromise with Republicans. Finally, after three decades of intense criticism from her foes, there is an issue of trust with her that is impossible to solve on its own. Kaine plans now to serve as a character witness. “She never backs down,” he said Saturday. “Hillary, whatever the drama, whatever the attack, whatever the situation, keeps going.”

Adding Kaine lends Clinton credibility here where she needs it. A boring, experienced white man from the South is meant to send a reassuring picture. That was a rationale behind Barack Obama choosing Joe Biden, an old-school foreign policy maven to offset his freshness, and it helped explain why George W. Bush went with Dick Cheney to soothe fears that the son of one President could not operate without some adult supervision.

This VP Pick Could Win Hillary Clinton the Presidency

Clinton advisers know that they face a tough climb in places like rural southeast Ohio, central Pennsylvania or the Florida panhandle. But they can offset those losses if they can win over places like Delaware County, Ohio, just north of the state capital of Columbus; Bucks County, Pennsylvania, near Philadelphia; and south Florida, where Clinton was giving Kaine his big debut. Clinton’s numbers have been soft in those places, and she needs to firm them up if she’s going to beat Republican nominee Donald Trump. She doesn’t have to win rural areas, but she needs solid victories in the urban centers of these states, including the suburbs and exurbs.

Now that the pick is official, it makes perfect sense that Clinton visited Orlando on Friday to leave flowers at the makeshift memorial for those gunned down at a nightclub. She met the victims’ families and said it’s up to the nation to confront “the epidemic of gun violence.” She called on local, state and federal officials to do their part.

In a running mate, she got a partner who has done that, at all three levels. As Mayor of Richmond, he rented buses to send activists to a gun-control rally in Washington in 2000. As Governor in 2007, he confronted that mass shooting at Virginia Tech, which left 33 dead, including the gunman, and signed orders that closed a provision that let mentally ill individuals to buy guns.

In Some Cities, Police Push Back Against Open-Carry Gun Laws

“Kaine successfully took on NRA in a gun state, smoking in a tobacco state, climate change in a coal state,” tweeted Ron Klain, a chief of staff to Vice Presidents Al Gore and Joe Biden. Klain, who has advised Obama, as well, knew exactly where this debate was going.

The NRA, which has its national headquarters in Virginia, has long loathed Kaine and the policies he has promoted. Kaine has consistently been ranked an F by the group’s political arm, and in 2012 the group sank into an unsuccessful campaign against him.

“As chairman of the Democratic National Committee, Tim Kaine strongly supported the nomination of Sonia Sotomayor for the U.S. Supreme Court—the same Sonia Sotomayor who signed an opinion saying that Americans do not have an individual right to keep and bear arms,” the gun-industry group told its members during his most recent campaign. “As a Richmond councilman, Kaine suggested that the city of Richmond team up with Fairfax and Norfolk to push gun control laws.”

House Democrats and Republicans Are on a Collision Course Over Guns

By Saturday afternoon, the NRA had yet to issue a statement on Kaine’s selection. The group has already endorsed Republican nominee Donald Trump. One the group’s top aides addressed the Republicans’ convention in Cleveland last week.

Kaine predicted the NRA was coming for him again: “I don’t mind powerful groups campaigning against me. That’s like an extra cup of coffee for me.” He also noted that he has never lost an election in his career.

The leading anti-gun violence group, the Brady Campaign, has backed Kaine in his elections. As Governor, Kaine vetoed a bill that would have allowed drivers carry handguns in their glove box and another that would have permitted gun owners to take concealed weapons into bars. He describes himself as a gun owner who doesn’t think the rights are absolute.

In the Senate, Kaine has been just as consistent in pushing for controls to guns-for-all. He co-sponsored legislation after the shooting at Mother Emmanuel Church, where nine parishioners were killed in Charleston, S.C. He also has backed legislation to expand background checks, block online and gun-show sales, and tougher penalties for those found to be breaking current laws. He joined the Senate sit-in trying to force a Senate vote on gun limits.

For gun rights groups, Kaine offers decades of votes and proposals to attack in ads. But voters seldom cast their ballots based on running mates. The vice presidential candidate role is there to reassure and augment, not to overtake the race.

Kaine’s stances on guns help Clinton on that front, and, in doing so, can bring along women. And if the NRA wants to attack, her team will welcome the onslaught. More than two decades after Democrats lost control of the House in 1994, amidst a backlash over recently passed gun control, Clinton feels gun control will be a winning issue in 2016. Clinton’s fundraising and get-out-the-vote staffers are looking forward to the coming fight.