This Startup Is Turning Gas Flares Into Power 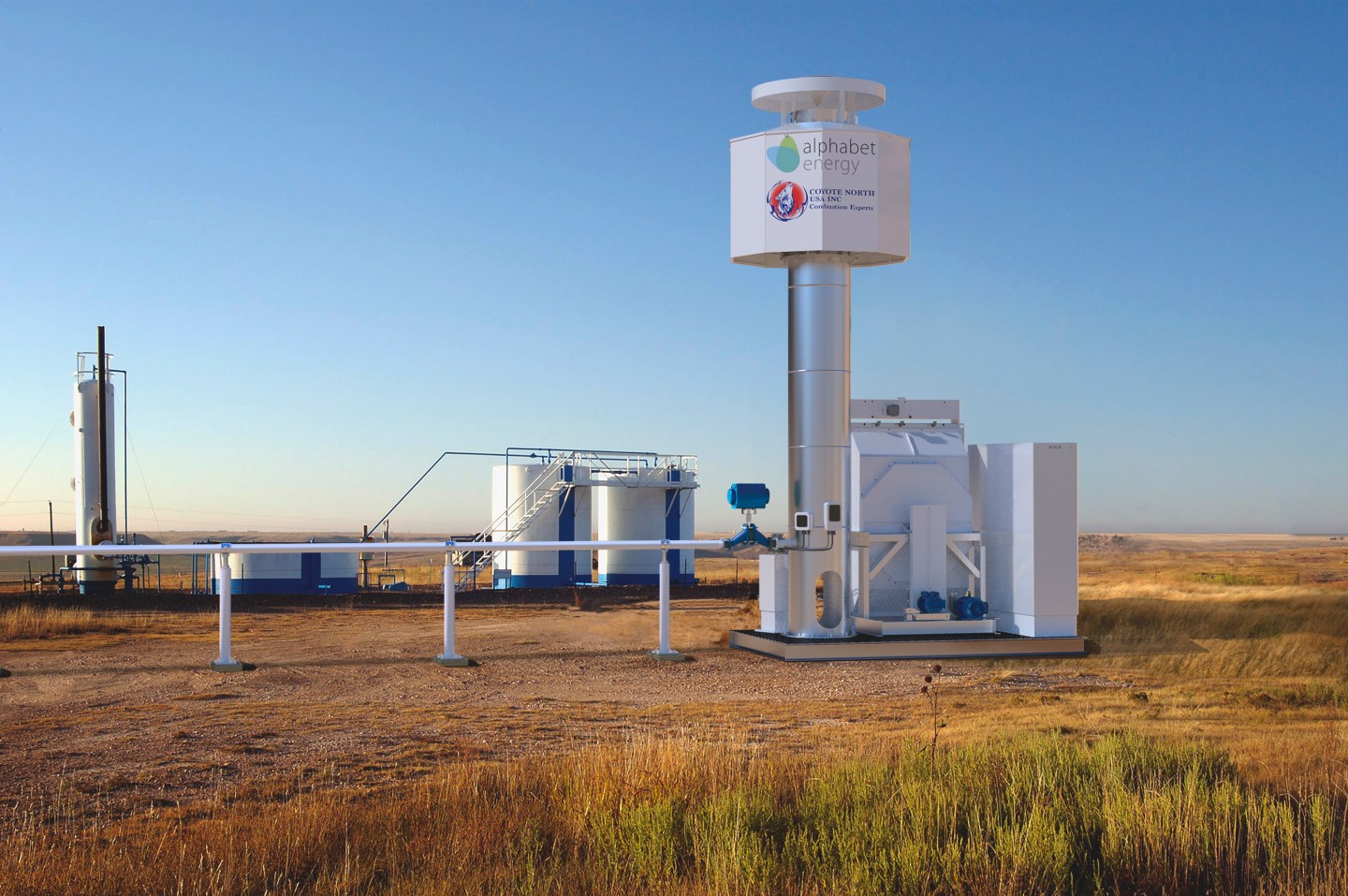 If you look at an image of the North Dakota’s Bakken Shale, a major oil and gas producing region, from space at night it looks like it could be New York City.

Bright lights dot the region, thanks to the common practice of oil and gas companies burning off natural gas during oil and gas drilling and production to release pressure, called flaring. It’s been estimated that about a third of the natural gas produced during the fracking boom in the Bakken was being flared.

But where oil and gas producers see waste, one company sees power. A seven-year-old, Bay Area startup called Alphabet Energy has developed a flare combustor that uses the heat from flaring gas to generate electricity.

The company is selling the product, called the Power Generating Combustor, to oil and gas producers and transmitters, which typically have hundreds of combustors per state installed to handle all of the excess gas from their sprawling operations. The device uses a regular flare combustor made by combustion tech firm Coyote North, with a cap on it from Alphabet Energy.

Alphabet Energy thinks the flare technology is so promising, that it’s raised another $23.5 million in funding. Investors include oil services company Schlumberger, the private equity firm Osceola Capital Management, Oakland, Calif.-based venture capitalists Claremont Creek Ventures, TPG, and GM Ventures, which is interested in the technology for the automotive industry.

Alphabet Energy’s secret sauce is a material called a thermoelectric, a semiconductor that can convert heat into electricity. Scientists the world over have worked on developing thermoelectric materials for decades for various purposes, but most use rare and expensive materials, so they’re normally far too expensive to use widely in commercial applications.

For more on energy companies of the future watch our video.

In contrast, Alphabet Energy is using abundant and low cost materials like silicon. Founder and CEO Matt Scullin started the company while at Lawrence Berkeley National Laboratory, and used the latest in material science and nanotechnology to drive costs down.

Over the past few years, the team has developed several applications for the heat-to-electricity material, like installing it in a diesel generator, or in a vehicle engine. Scullin tells Fortune that he expects rapid growth in sales of this new flare combustor over the coming months.

Why? One reason is regulation. Another is low oil and gas prices.

U.S. regulators have been increasingly requiring oil and gas companies to curb the venting and leaking of natural gas during their operations. When released, natural gas emits methane, a potent greenhouse gas, into the atmosphere.

The Obama administration has a goal to cut methane emissions from the oil and gas sector by 40 to 45% over the next 10 years.

But with gas prices so low, and with oil and gas companies closing drilling and production operations across the U.S., it’s not so economical for the companies to simply capture and sell the natural gas. It’s more economical to just burn it off, or flare it.

But that’s a problem, too, on its own. Flaring the excess gas releases carbon dioxide into the atmosphere, and is also just wasteful.

Turning the heat from flaring into electricity might not stop the CO2 from being emitted, but it recycles the heat to be used as power. The generated electricity can power a company’s drill pad or oil well and save them money.

Creating new ideas for how to use heat-to-electricity materials is a pretty difficult business. Could the flare combustor be the killer app?

Tech companies and gas equipment vendors are working on other various ways to help oil and gas companies curb the leaking and venting of methane. According to the Interior, the amount of methane that was emitted from oil and gas drilling between 2009 and 2014 was enough to power more than 5 million homes for a year.