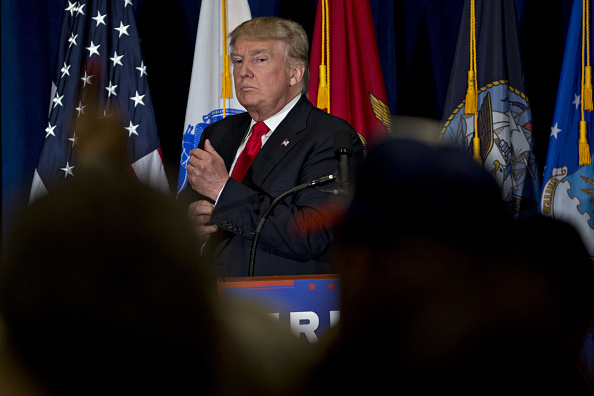 Donald Trump, presumptive 2016 Republican presidential nominee, looks towards the crowd after speaking during a campaign event on veterans reform in Virginia Beach, Virginia, U.S., on Monday, July 11, 2016. Trump said he expects to choose his running mate for the GOP presidential ticket in the next three or four days and is leaning toward a political pick to balance out his outsider status, according to a Monday interview with the Washington Post. Photographer: Andrew Harrer/Bloomberg via Getty Images
Bloomberg via Getty Images

Donald Trump’s campaign rhetoric on climate change has him at odds with every other leader in the free world, a new study reveals.

The Sierra Club environmental advocacy group released a report to the Associated Press today detailing all climate change-related statements given by leaders from 195 nations. The study points out Trump is the only potential world leader who’s said climate change isn’t real, setting him apart from all U.S. allies like the UK and Germany as well as China – the world’s largest polluter – and even rogue nations like North Korea.

“Donald Trump has said a lot about the kind of amazing deals he’ll make with foreign nations,” Sierra Club Spokesman Adam Beitman tells Fortune. “What’s clear from this study is he’s going to be starting out in total disagreement from the very beginning on a very key issue that the rest of the world is in total agreement with.”

In earlier statements, Trump has referred to climate change as a “myth” and a “con job,” promising to renegotiate America’s position in the legally binding Paris accord signed by all participating nations at the inaugural Paris Climate Change Conference last year.

In contrast, Chinese President Xi Jinping, whose country leads the world in CO2 emissions, has called for a reduction of the number of coal-fired power plants in his nation and a conversion to alternative energy sources like wind turbines and solar panels.

“The Kingdom of Saudi Arabia will be engaged in several actions to address climate change and make its development more sustainable,” the Saudi Government wrote in a statement last year.

The Sierra Club wants its report serves as a warning to voters.

“There’s one person who wants to let the whole [world] burn and it’s Donald Trump,” Beitman said. “We can’t let him be President.”

The Trump campaign did not return calls for comment.