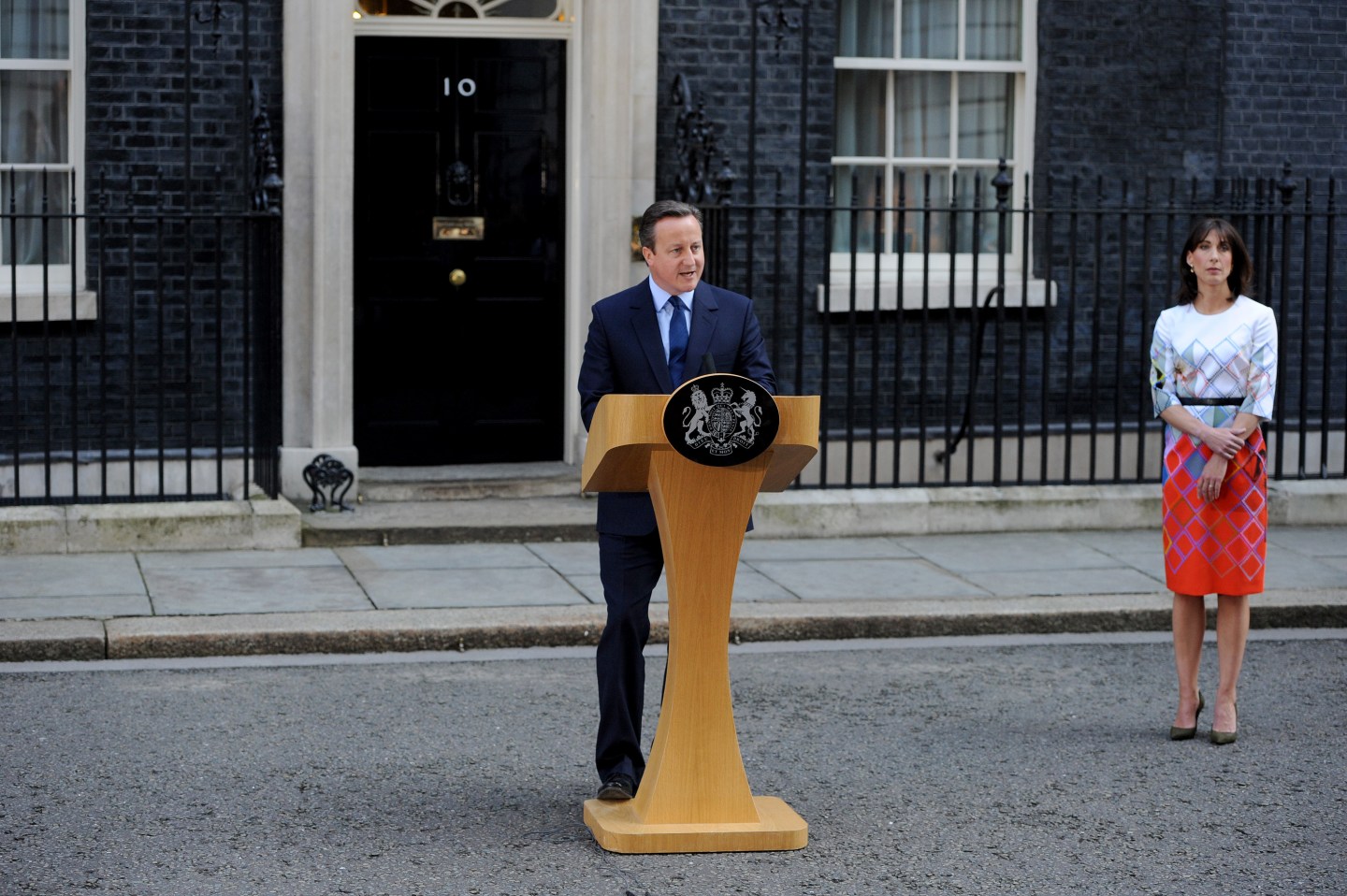 LONDON, UNITED KINGDOM - JUNE 24: British Prime Minister, David Cameron and his wife Samantha Cameron after delivering his resignation at No. 10 Downing street after the UK has voted by 52% to 48% to leave the European Union after 43 years in an historic referendum, in London, United Kingdom on June 24, 2016. (Photo by Kate Green/Anadolu Agency/Getty Images)
Anadolu Agency Getty Images

The country has just taken part in a giant democratic exercise, perhaps the biggest in our history.

Over 33 million people from England, Scotland, Wales, Northern Ireland and Gibraltar have all had their say. We should be proud of the fact that in these islands we trust the people with these big decisions. We not only have a parliamentary democracy, but on questions about the arrangements for how we’re governed.

There are times when it is right to ask the people themselves, and that is what we have done. The British people have voted to leave the European Union, and their will must be respected.

The will of the British people is an instruction that must be delivered. It was not a decision that was taken lightly, not least because so many things were said by so many different organizations about the significance of this decision. So there can be no doubt about the result

There can be no doubt about the result.

Across the world, people have been watching the choice that Britain has made. I would reassure those markets and investors that Britain’s economy is fundamentally strong, and I would also reassure Brits living in European countries and European citizens living here that there will be no immediate changes in your circumstances.

We must now prepare for a negotiation with the European Union. This will need to involve the full engagement of the Scottish, Welsh and Northern Ireland governments to ensure that the interests of all parts of our United Kingdom are protected and advanced. But above all, this will require strong, determined and committed leadership.

I’m very proud and very honored to have been Prime Minister of this country for six years. I believe we’ve made great steps, with more people in work than every before in our history, with reforms to welfare and education, increasing people’s life chances, building a bigger and stronger society, keeping our promises to the poorest people in the world and enabling those who love each other to get married, whatever their sexuality.

But above all, restoring Britain’s economic strength, and I’m grateful to everyone who’s helped make that happen.

I’ve also always believed that we have to confront big decisions, not duck them. That is why we delivered the first coalition government in 70 years, to bring our economy back from the brink. It’s why we delivered a fair, legal and decisive referendum in Scotland, and it’s why I made the pledge to renegotiate Britain’s position in the European Union and to hold a referendum on our membership, and have carried those things out.

I fought this campaign in the only way I know how, which is to say directly and passionately what I think and feel — head, heart and soul. I held nothing back. I was absolutely clear about my belief that Britain is stronger, safer and better off inside the European Union, and I made clear the referendum was about this and this alone, not the future of any single politician, including myself.

But the British people have made a very clear decision to take a different path, and as such I think the country requires fresh leadership to take it in this direction.

I will do everything I can as Prime Minister to steady the ship over the coming weeks and months, but I do not think it would be right for me to try to be the captain that steers our country to its next destination.

This is not a decision I’ve taken lightly, but I do believe it’s in the national interest to have a period of stability and then the new leadership required. There is no need for a precise timetable today, but in my view we should aim to have a new Prime Minister in place by start of the Conservative Party conference in October.

Delivering stability will be important, and I will continue in post as Prime Minister with my cabinet for the next three months. The cabinet will meet on Monday, the governor of the Bank of England is making a statement about the steps that the bank and the treasury are taking to reassure financial markets.

We will also continue taking forward the important legislation that we set before parliament in the Queen’s speech, and I’ve spoken to Her Majesty the Queen this morning to advise her of the steps that I’m taking.

READ: The ‘Brexit’ Result Signals That the System Is Broken

The British people have made a choice. That not only needs to be respected, but those on the losing side of the argument — myself included — should help to make it work.

Britain is a special country. We have so many great advantages. A parliamentary democracy where we resolve great issued about our future through peaceful debate, a great trading nation with our science and arts, our engineering and our creativity respected the world over. And while we are not perfect, I do believe we can be a model for the multi-racial, multi-faith democracy where people can come and make a contribution and rise to the very highest that their talent allows.

Although leaving Europe was not the path I recommended, I am the first to praise our incredible strengths. I’ve said before that Britain can survive outside the European Union, and indeed that we could find a way.

Now the decision has been made to leave, we need to find the best way, and I will do everything I can to help.

I love this country, and I feel honored to have served it. And I will do everything I can in future to help this great country succeed.