Google Removes a Chrome Extension That Identified and Tracked Jews 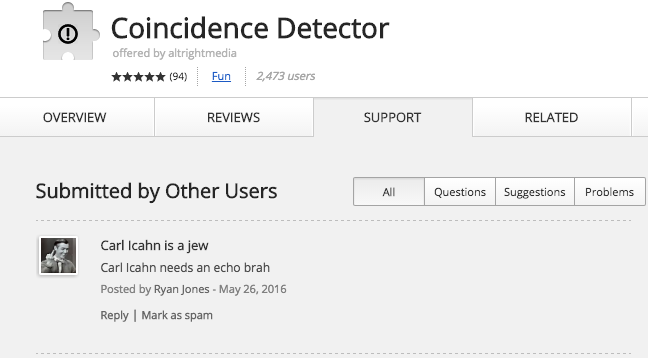 An extension for Google’s Chrome browser that let users identify and track suspected Jewish members of the media and entertainment industries has been removed from the Chrome store after the web giant said it breached its rules against promoting hate speech and inciting violence.

The extension, known as Coincidence Detector, identified suspected or confirmed Jews by adding triple parentheses to their names wherever they were referenced online. Its existence was first reported by Mic, a New York-based news site targeted at millennials, in a post on Thursday that described how neo-Nazis and anti-Semites were using it to target Jews for abuse and harassment.

In effect, the extension appeared to work as a kind of crowdsourced database, with users recommending or suggesting new additions or correcting and adding to those suggested by others. At the time it was removed, the Coincidence Detector had been downloaded more than 2,700 times and had a database of 8,700 people. It had a rating of five out of five stars, according to Mic.

The name of the Chrome extension appears to have been intended as a reference to anti-Semitic conspiracy theories that Jews somehow dominate the media and entertainment industries, and control them from within to the detriment of society. It was also likely chosen so that it wouldn’t raise any red flags inside Google, and appears to have been in use for months, if not longer.

As Mic described in a separate story, the use of two or three brackets around the name of a suspected or confirmed Jewish person is called an “echo” in right-wing and anti-Semitic groups and communities online, and is a way for such groups to single out Jews in a way that doesn’t attract a lot of attention.

The origins of the symbol ((())) can be traced to a hardcore, right-wing podcast called The Daily Shoah in 2014. It’s known as an echo’ in the anti-Semitic corners of the alt-right — a new, young, amorphous conservative movement that comprises trolls fluent in internet culture, free speech activists warring against political correctness and earnest white nationalists.

New York Times writer Jonathan Weisman described how he was targeted for online harassment—in many cases by supporters of Donald Trump—after receiving tweets that mentioned his name and included double brackets. One Twitter user described it as a “dog whistle” or identifier that would alert like-minded people to Weisman’s Jewish heritage, and he soon received a number of threatening messages, including photos of the front gates of Auschwitz, a German concentration camp.

Google likely took quick action on the Coincidence Detector extension because it has been criticized for anti-Semitic elements built into its web searches and other features. Last year, a number of groups pointed out that searches for “Who controls Hollywood” suggested an encyclopedia entry on Jews as a result. Google said it was working to fix the problem by adjusting its algorithms.