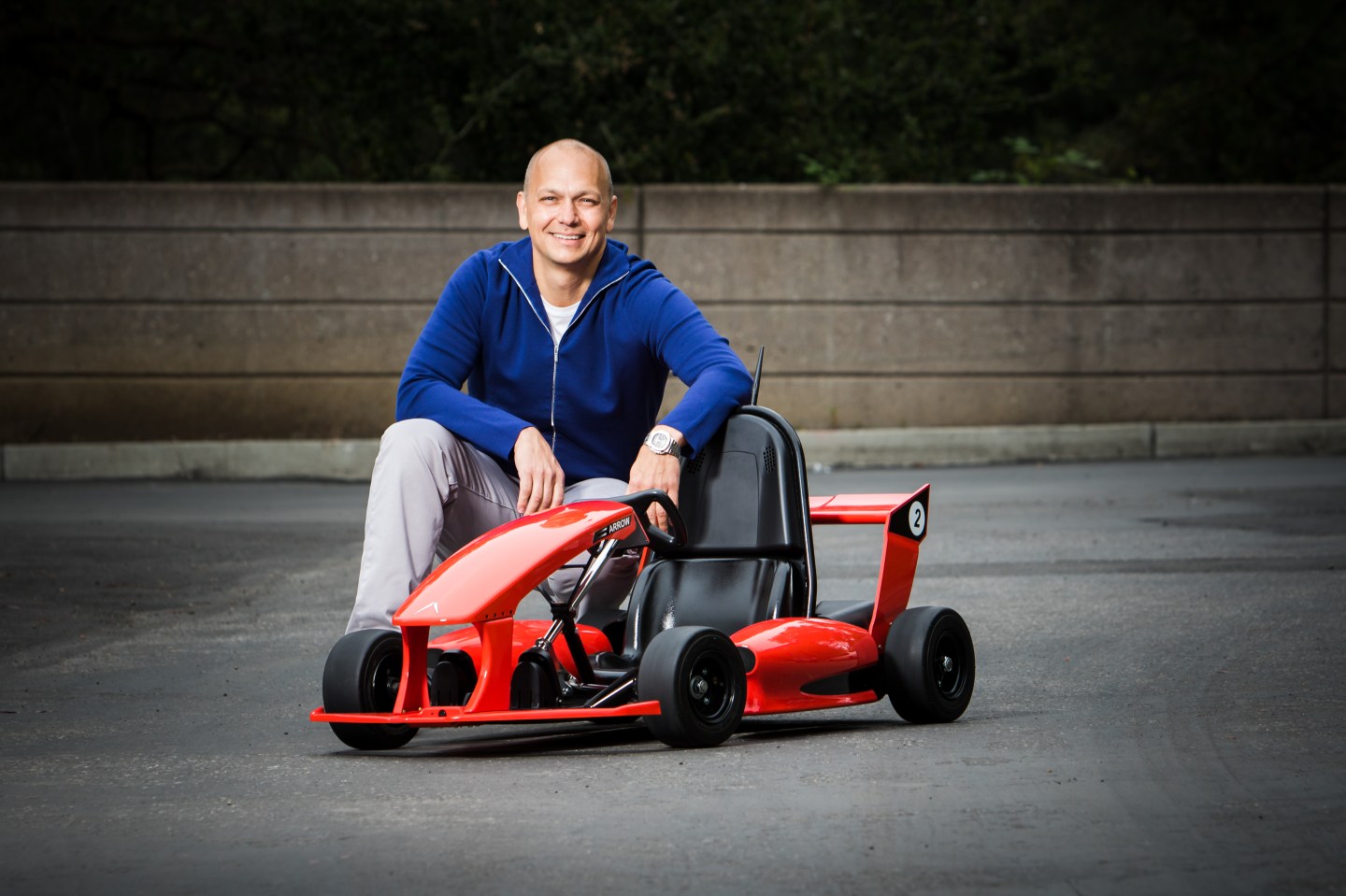 Tony Fadell has some serious claims to fame within the world of tech. He led design for many of Apple’s iPods and the earliest iPhones. More recently, Fadell added to his reputation as a gadgets guru for his role as CEO and co-founder of Alphabet-owned Nest, a maker of “smart” thermostats and smoke detectors.

But there’s another project Fadell has quietly worked on without any of the fanfare of the projects at Apple (AAPL) and Alphabet (GOOG). Fortune has learned he also co-founded Actev Motors, a Silicon Valley startup that made a big splash earlier this year at New York City’s Toy Fair with the Arrow Smart-Kart, a $600 electric car that comes with app-based controls for today’s helicopter parents.

Actev Motors, co-founded with the startup’s CEO Dave Bell, is intended for kids between the ages of five and nine years old and is the first electric go-kart for children. An app connects to the vehicle via Wi-Fi for a wide range of controls, including adjusting maximum speeds (of up to 12 miles per hour), an emergency stop button, and a virtual “geofence” that can let parents control the range of the vehicle. The app also has some features meant for kids, including keeping tab of driving time, total distance, and speed.

“We want to teach the next generation about electric vehicles,” Fadell told Fortune in a recent interview.

Fadell’s work with Actev Motors is a passion project that ties to both his childhood interest in automobiles and his other full time gig: parenting. It is completely separate from his responsibilities at Nest, which has been in the news lately because of some reported challenges growing that brand.

As a young child in the 1970s, Fadell fondly recalls the time he spent constructing bird houses, repairing lawnmowers and bikes, and building soap box derby cars with his grandfather. “I thought, ‘Well, what would it look like in a modern day form 40 years later?'” Fadell asked rhetorically. “Soap box racing was already pretty old school even in the 1970s. So what if you could take it to the next level? What would it look like?”

That was the inspiration of Actev Motors, which Fadell says is a platform for potential future gadgets—though he declined to say what could be next in the pipeline. He added that the idea of developing a vehicle for kids had been in the back of his mind for about seven years.

“It had to materialize before they got older because I really wanted to do this for them,” said Fadell, who has three children under the age of 10.

While the $19.5 billion U.S. toy industry has always generated attention from startups, many of the new products come in the form of dolls, plush animals, board games, and other traditional toys that are easy to construct. But in recent years, Silicon Valley entrepreneurs have paid more attention to the market, either inventing their own tech toys or partnering with big names like Mattel (MAT).

“I think it’s a new opportunity,” Bell said. “Parents are willing to spend a lot of money on their kids if it can hold their attention and help develop their skills.”

Actev’s Arrow Smart-Kart is far more expensive than the main competitor on the market, Mattel’s Fisher-Price Power Wheels, which generally prices between $260 to $400. But Arrow Smart-Kart has Wi-Fi-enabled abilities, can be used by older kids, and achieves higher speeds. The smartphone capabilities also add an element of safety that Power Wheels can’t deliver.

Fadell says the electric vehicle he designed is tied to his interest in STEM-related pursuits. (STEM is an acronym for science, technology, engineering, and math education). He advocates a more hands-on approach to learning, saying “in my own life, education was learning by doing, not by being educated and then doing.”

With that in mind, Actev can almost be seen as a platform for Fadell to continue that sort of education for himself. “I believe that where we are going to take the company is learning by doing, and having fun at the same time,” he said.

Asked if there could be an electric go-kart for adults, Fadell replied he gets that question every time he has shown the vehicle to his adult friends.

“They ask for an adult size,” he said. “So you can imagine what we are thinking.”