The EU Has Trust Issues, and It’s Taking Down Greece’s Economy 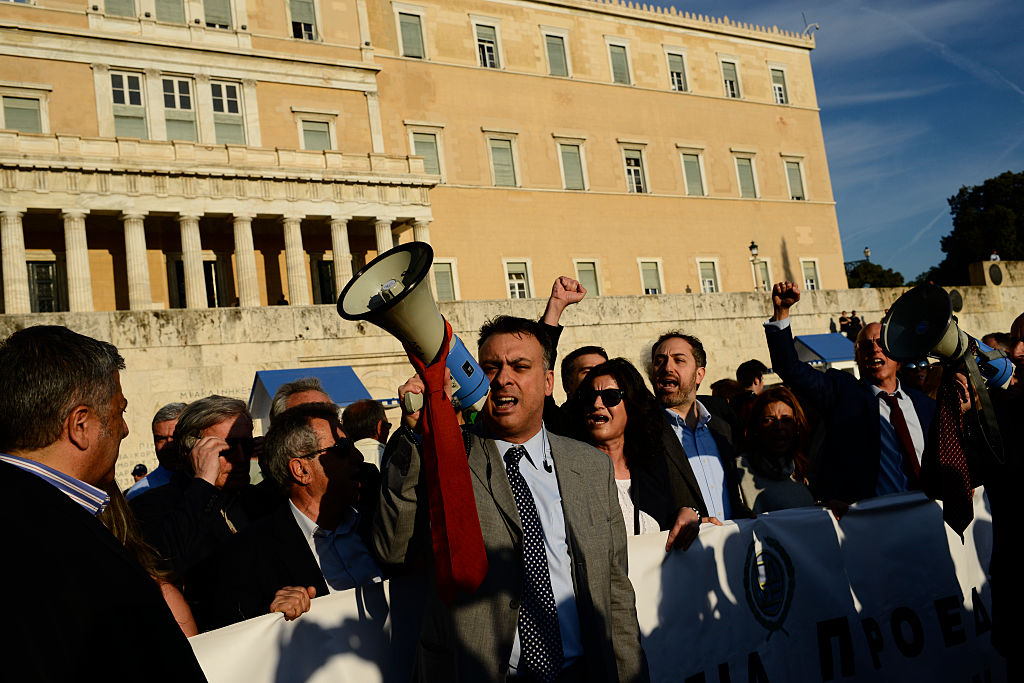 Now if uncertainty over a major event can impact a strong economy, with strong institutions over a few months, what kind of effect would it have on a weak economy, with weak institutions over seven years? One needs to look to Greece to find the answer. Complete lack of investments, large decreases in consumption and a large increase in unemployment.

As Euro-area finance ministers convene in Brussels on Tuesday to discuss the country’s 11 billion euro bailout tranche that the IMF recommends it needs,the EU could dramatically reduce this uncertainty by providing to Greece a substantial debt relief that the IMF recommends. The essence is pretty much pay little to nothing to service debt in the next 20 years. That would make the probability of a Grexit negligible and would presumably give Greece the opportunity to grow as it would reduce significantly the need for large budget surpluses.

So then why is the EU not willing to do this?

The primary reason is lack of trust to Greek governments. One could imagine how Greek governments could resume spending to buy votes and win elections. This is what they have been doing for almost 40 years now. When there is lack of trust, transactions are governed by formal contracts that have many clauses, conditions, covenants and other formalities. In contrast, in high trust environments, such as the Scandinavian countries, relational contracts guide economic transactions where there is a sense of trust that the other party in the transaction will perform its obligations.

Since there is lack of trust, the EU is imposing strong conditionality in its financing arrangement with Greece. Officials are micromanaging every aspect of economic activity and imposing clauses and evaluations of the program in order to provide the next round of financing. Of course, this has been a disaster for Greece. The conditions lead the country down in a recessionary path that even countries with strong institutions could probably not come back easily from.

It appears that the EU is now in a lose-lose situation in Greece. If it continues down the same path it is very probable that Greece will destabilize completely. The government is already crumbling under the weight of populist promises that it could never keep in the first place. The economy is devastated and some of the best human capital has already abandoned the country, for years if not decades. At the same time, Greece is facing a huge challenge with a large number of refugees. The Greek people have been amazingly generous and willing to help the refugees, but public institutions are rotted, supplying inadequate help to the wave of refugees. Perhaps this time around the EU cannot afford the risk of destabilizing Greece. The wave of refugees, the rise of populist parties both from the left and the right in many European countries, the discussion about Brexit, the possibility of a collapse of the economy of Saudi Arabia if oil prices persists at such low levels, and the uncertainty over the direction of US politics make a destabilized Greece very risky for the EU.

If it changes course and provides Greece substantial debt relief then it introduces a moral hazard problem in the system. It sets a precedent that could lead to political risk contagion. One can imagine that sometime in the not so distant future the EU will be dealing again with economies that are in trouble. Many European countries are still not competitive. The proposed changes and the tensions over labor relations in France reflect just that. Other countries will eventually find themselves in the place of Greece.

But it is not just the EU that is now in a lose-lose situation. It is the Greek people too. If the EU continues down the same path, they are unlikely to experience an increase in their quality of living for many years to come. And if it changes course, they will likely continue to be governed by the same corrupt and nepotistic forces that resist any type of meritocracy in the country.

The only way to see a win-win here is through a complete overhaul of the existing Greek government or a newly elected one. A government that would be a trustworthy partner in the EU, that it would believe in and implement badly needed reforms in the functioning of the courts and the enforcement of property rights, that it will commit to a stable tax system and to lowering taxes over time, and a relentless focus on transparency and accountability in the public sector.

Perhaps a good starting point would be to learn from the experience of Italy and the leadership of Matteo Renzi, who is implementing a series of reforms that could modernize the Italian economy.

George Serafeim is the Jakurski Family Associate Professor at Harvard Business School and recipient of the inaugural Pericles Leadership Award for services to the Hellenic Republic.