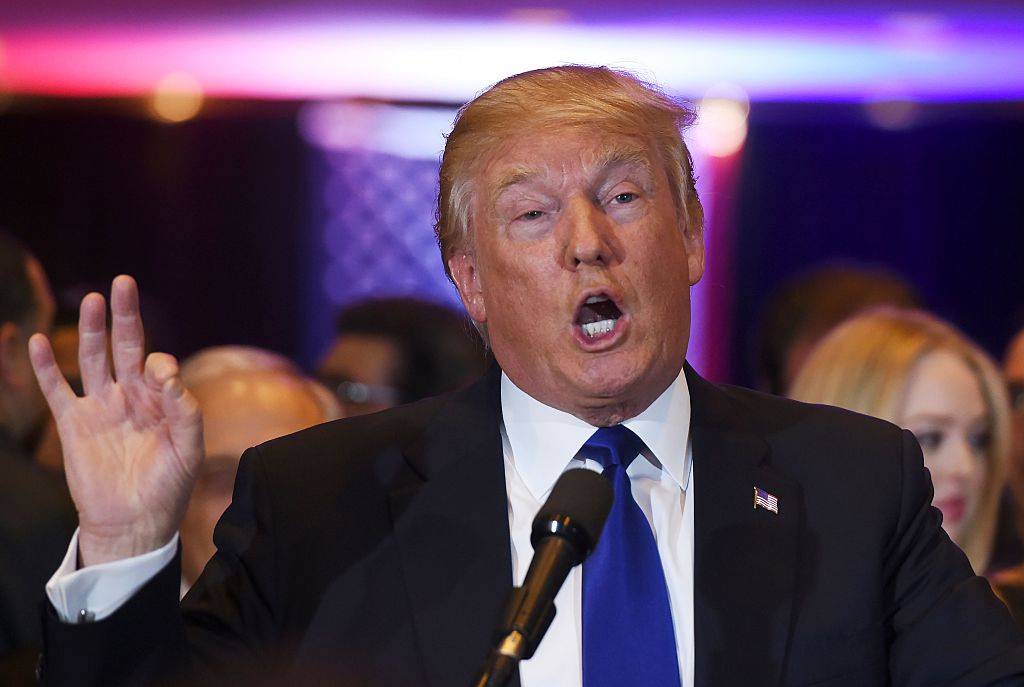 All political candidates use some spin to advance their cause. It is now so common that voters come to expect it. As a businessman, Donald Trump long practiced an extreme version of self-promotion he called “truthful hyperbole” to get what he wanted. Now, as he is the presumptive GOP nominee for president, this past is coming back to haunt him.

The Washington Post set off a controversy last week when it published a story alleging that Trump posed as a public relations man named John Miller to energize the tabloid scandal raging over his affair with the model/actress Marla Maples and his divorce from his first wife Ivana. Trump last week denied that he’d made the call. The report provoked a new round of questions about Trump’s character. What could possibly motivate a grown man running a business empire to do such a thing? And what does this say about Trump’s temperament?

In fact, Trump’s use of fake names is far more extensive than most people realize. For more than a decade – 1980 to 1991 — Trump used phony names to promote himself. I know from my work as Trump’s biographer that even prior to the John Miller episode, Trump had posed as John Baron (or Barron). A close look at when and how Trump used these ruses–and how he’s using a new form of verbal trickery today–provides insight into billionaire developer who could be America’s next president.

Who gave Trump the idea to use fake names

Trump’s father, Fred, had used a fake name – Mr. Green – to conduct business that he wanted to keep secret. He was well-known as a developer in the outer boroughs of New York, and he wanted to inquire about properties without tipping his hand. In theory, owners who knew that wealthy Fred Trump was interested would bargain more aggressively. “Mr. Green” was well known by his children. When Donald began using John Baron alias, the joke inside the family was that on the day became the subject of a subpoena, poor Baron would fall ill and die.

He used Baron, and later, Miller, to avoid trouble, float ideas, and even spread gossip about himself. In all these cases he sought to protect and polish the Trump image, or brag in ways that would be unseemly, even for a man who is synonymous with self promotion.

The first known case I could find was in 1980, when Trump used “Baron” to fend off reporters who called about the destruction of important art work that was supposed to be preserved as he tore down the Bonwit Teller department store to make way for his Trump Tower. In 1984, Baron appeared again as the spinmeister who put the best face on a Trump setback in Atlantic City. And he was the one who spoke about the rumor that Trump was buying the famous 21 Club.

In 1985, it was Baron who suggested that other owners in the upstart United States Football league help pay the salary for the quarterback Doug Flutie who had signed with Trump’s team, the New Jersey Generals. During a legal dispute in 1990 Trump admitted, under oath, that he had used the name, saying, “I believe on occasion I used that name.”

In the case of the Bonwit Teller artwork, Trump used John Baron, supposedly a vice president in his company, to tell The New York Times in 1990 that “the merit of these stones was not great enough to justify the effort to save them.” Art expert Robert Miller disagreed, saying the art deco friezes were as valuable as the sculptures on the nearby Rockefeller Building and their loss was “just tragic.”

Given the civic concern about the decision to jackhammer the art to smithereens, Trump’s desire be shielded by John Baron suggests he knew he had crossed a line. But Trump does not apologize, and he does not back down. At least in his own name.

Similarly, John Baron’s suggestion that Trump’s fellow team owners in the USFL help pay for his quarterback Doug Flutie tells us something about his willingness to speak clearly, and directly, for himself. At the time the matter was raised, the USFL was struggling against the more established National Football League. Trump was pushing the owners to bring a lawsuit against their rivals. Many of them resisted. Trump would have looked weak going to them, hat in hand, seeking help paying a contract he had negotiated? But it couldn’t hurt having someone else float the idea.

John Baron became expendable in 1990, when Trump testified in the case of some workers who said he owed them $1 million because, as undocumented immigrants, they had been underpaid by one of his contractors. Years earlier, “John Baron” had said the workers might be counter-sued by Trump.

When asked under oath who Baron might be, Trump confessed that it was an alias he had used.

And then ‘John Miller’ suddenly appears

After admitting under oath that Baron was a fake, Trump apparently offered a new spokesman, John Miller, to Sue Carswell of People magazine in 1991. Unlike Baron, who was concerned with business matters, Miller served to spread gossip about Trump’s romantic exploits. Miller made sure that Carswell understood that Trump was practically being hounded by celebrated women – Kim Basinger and Madonna were mentioned – and that in addition to his relationship with Marla Maples he had “three other girlfriends.”

In an interviewed recorded on tape by Sue Carswell, Miller explains that Trump broke things off with Maples – “he really didn’t want to make a commitment” — in favor of the celebrity beauty Carla Bruni. Miller went on to say Trump was doing “tremendously well financially “and that many other famous women were pursuing him romantically.

Months later, after People magazine outed John Miller as Donald Trump, Britain’s Daily Mail asked Bruni whether she was dating Trump. She refuted the story and called Trump a “lunatic.” When contacted by the Mail, Trump backed down and suggested he had nothing to do with the stories. “These stories are sheer nonsense,” he said.

The stories were nonsense. But they did deliver a payoff for Trump. By using the John Miller ruse, he was able to plant in the press the idea that he was one of the world’s most sought-after men. This status would give him leverage in dealing with Maples and, as a man who wanted the world to see how successful he was, the sheen of sexy desirability.

Trump: “You know it doesn’t really matter what [the media] write as long as you’ve got a young, beautiful piece of ass”

Never short of vanity, Trump has often spoken of his own supposed beauty. And he considers the attention he might get from attractive women to be protection from negative publicity. “You know it doesn’t really matter what (the media) write as long as you’ve got a young, beautiful piece of ass,” he told Esquire in 1991.

Trump was, at the time, enduring the shame of his Atlantic City casino bankruptcy. Trump Airways was failing. And he would soon have to sell the Plaza Hotel. Deprived of a plausible claim to brilliance in business, he turned toward the other symbol of status he valued the most – beautiful women. Trump wanted the world to know he was being swarmed by desirable women, and therefore he was a much desired man, he couldn’t resist decorating the tale with bold face names. And as any good gossip monger knows, it’s always better to have someone else say that you are handsome, appealing, and in demand, than to say it yourself. By having John Miller inform Sue Carswell, Trump created a degree of separation between himself and the claim which made it just a little more credible.

Unfortunately Bruni wasn’t willing to play along. Carswell also later said that Trump confessed to her that he was, in fact, John Miller.

That episode was the last known time that “John Miller” spoke for Trump, but Trump only moved into a more slippery way of promoting himself and evading responsibility for what he says. He began using a rhetorical technique called paralipsis, which enables you to make inflammatory statements without taking responsibility for them. You can credit or blame others for the content.

So, in 2008, when radio host Howard Stern asked Trump if he had dated Bruni, Trump didn’t swat away the false rumor his fake publicist apparently started. Instead Trump said “no comment,” which encouraged Stern to keep on talking about her.

Stern asked, “Was she bad in bed?”

Trump replied, “I can’t comment on that. She’s gonna marry the president of France. I want to have good relationships with France. I don’t want to be criticizing first lady of France.”

With their performance, which lasted several minutes and was heard by millions, Trump and Stern managed to create the impression that Trump had firsthand knowledge of Bruni’s sexual behaviors even though he never actually confirmed he had dated her. Trump used similar trickery when he retweeted a deceptive message about race and crime and then denied responsibility for the lies in the text because “all it was was a retweet.” As he said at the time that he distributed false data on crime, “This was a retweet. And it comes from sources that are very credible, what can I tell you?”

In essence, Trump often gives us a rhetorical version of the three-card monte game I once saw conducted on the sidewalk outside his eponymous tower on Fifth Avenue. Like the hidden queen in the game, the facts in the issues Trump discusses are obscured by his entertaining methods. And like the card sharp, Trump’s purpose is obvious. His verbal gymnastics are intended to burnish his image, excite his followers, or tear down his competitors and critics. And like the three card monte dealer, Trump is prepared to bolt should he get caught in the game.

Last week, when a Post reporter asked him about John Miller during a call, the phone line suddenly went dead. A quick call back brought word that Trump was not available.

Trump always works to gild his image and seems to get delight in getting over on reporters and the public. The important questions that should arise as we stand on the political sidewalk and watch Trump at work, though, have nothing to do with what he’s saying — but his inclination to use such trickery and deceptiveness when dealing with the public.

Michael D’Antonio is author of Never Enough, Donald Trump and the Pursuit of Success (2015). Among his many other books are Mortal Sins, Sex Crime and the Era of Catholic Scandal and The State Boys Rebellion.