Dilma Rousseff’s Impeachment Should Not Be the End Goal 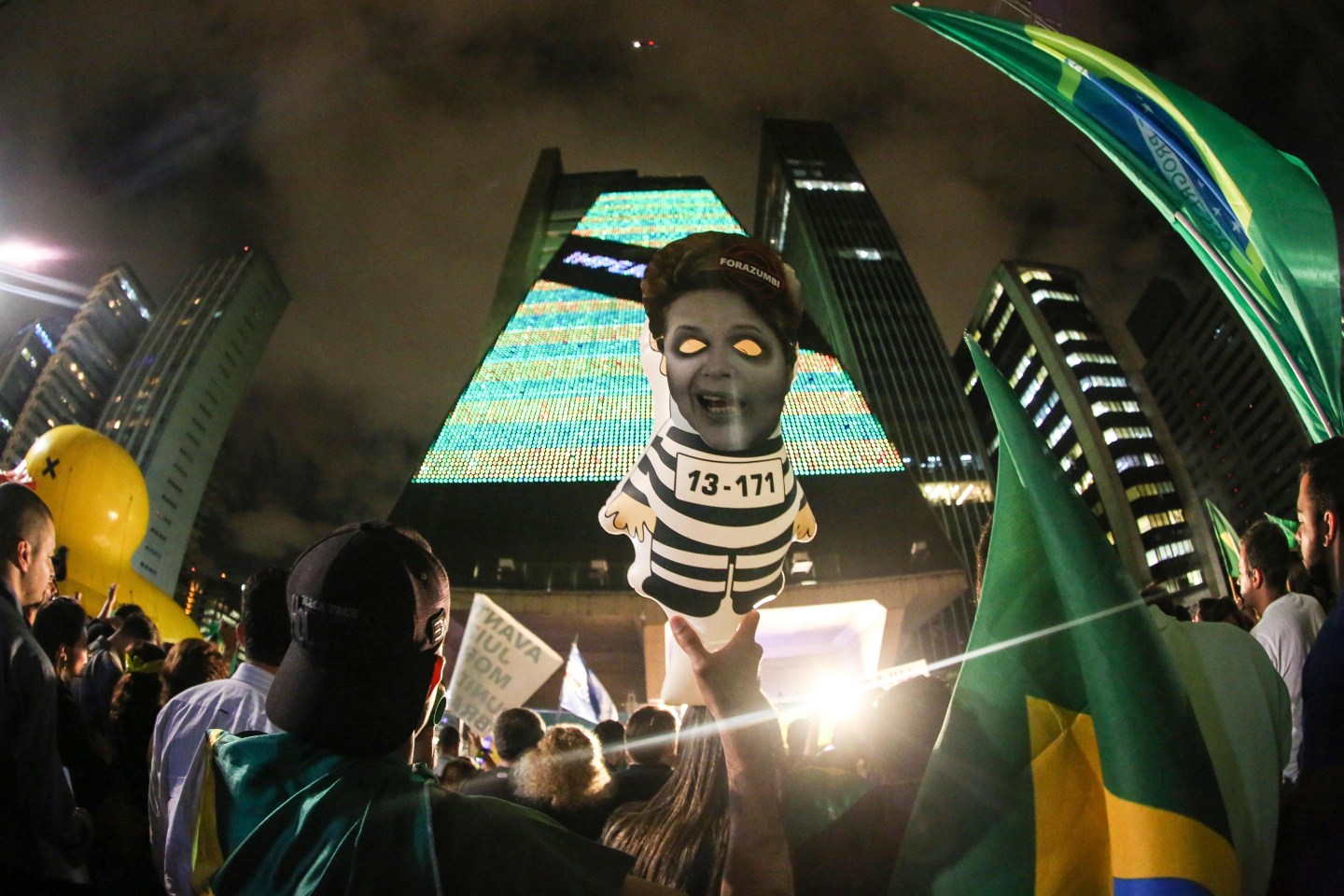 SAO PAULO, BRAZIL - MARCH 17: Atmosphere on the street during a protest against the government of president of Brazil Dilma Rousseff at Paulista Avenue in Sao Paulo, Brazil on March 17, 2016. People started protesting after the designation of former president of Brazil Lula Da Silva as chief of cabinet. (Photo by William Volcov/Brazil Photo Press/LatinContent/Getty Images)
Brazil Photo Press/CON LatinContent/Getty Images

This weekend, millions of Brazilians will be glued to their TV screens. No, they won’t be watching the final of the soccer World Cup, the famous (or infamous) Carnival parades in Rio or the last chapter of a Brazilian soap opera. Rather, Brazilians of all races, classes and political orientations will be watching (live) the sessions of the lower chamber of Brazil’s Congress which will decide if President Dilma Rousseff should be impeached.

As I write this piece, the odds are indeed that at least two-thirds of the 513-member lower house (the minimum required for the case to go to Senate for final trial) will vote in favor of the impeachment. I can already picture the big party that will follow, almost like the second carnival of the year. An euphoria and an uncanny enthusiasm will fill the hearts of a large part of the Brazilian population who has been deeply frustrated and disappointed with one of the worst political and economic crisis the country has ever faced. A feeling of “we can impeach a president,” “we can end corruption in Brazil,” “we did it” will prevail. Hope will come back to a country that always believed it is the country of the future.

As much as I share this hope and I see the huge potential for Brazil in the future, I believe that seeing President Rousseff’s impeachment as the climax is inappropriate and dangerous. Very dangerous. One thing that every good climber knows (and I learned it myself hiking in high altitudes in the Himalayas) is that getting to the top of the mountain should NOT be the ultimate goal. First, because the moment at the top is very ephemeral. Most of the lessons we learn (and the long term reward) is in the journey, in “how we got there.” Second, and most importantly, many, if not most, accidents happen in the down climb. Thus, what good leaders should make sure is that everybody understands that getting back safe is the goal (just watch the movie Everest or read Jon Krakauer’s Into Thin Air and you will see what happens when leaders fail to convey that message). Thus, as the whole country gets mobilized in the expectation of Rousseff’s imminent impeachment, it is important that the country also reflects on two critical questions: how did Brazil get there and how will it “descend” safely?

I see two opposing facets in Brazil’s journey toward Sunday’s impeachment vote. The first one is very positive: Brazil has increasingly strong institutions and a free press. Neither of these is very easy to find in many emerging markets. It is heartening to see the strength and competence of Brazilian judiciary in fighting corruption in all levels and putting in jail politicians and businessmen who thenceforth were believed to be untouchables. Equally, I don’t believe this level of popular mobilization would exist if the Brazilian press were not revealing, real time, the often surreal, details of the corruption investigations.

Not surprisingly, Sergio Moro, the 42-year-old federal judge who is leading the prosecution of the Car Wash investigation, is the most important Brazilian in the 2016 edition of Fortune’s The World’s 50 Leaders ranking (Moro is #13, just above Bono, the U2 rockstar). I believe Brazil’s strong institutions and free press should be reason for hope in the country’s future post-Rousseff.

Unfortunately, the second facet of this journey is worrisome. Brazil today is seriously divided. Part of country (today probably an important minority) continues to support Rousseff (and her predecessor, former President Lula) and believe the impeachment is a coup d’état. The majority of the population, however, is absolutely tired of living for almost 15 years under the Labor Party’s leadership and are desperate for change. The problem is that polarization between those two camps reached unprecedented levels in Brazil, to the point of actual street fights during demonstrations or more commonly a lot of “unfriending” in Facebook. In Brazil, this type of animosity is typically only seen between soccer rivals (the classic Fla-Flu in Rio or the eternal rivalry with Argentina).

In the difficult descent towards political stability and economic growth, Brazilians should be reminded about the important progress the country has made in the fight against corruption. Or as Moises Naim highlighted “the passive coexistence with corruption long endemic in Latin America is becoming a habit of the past”. This fight against corruption won’t be over with Rousseff’s impeachment and the popular mobilization will be critical for it not to lose momentum. But the most difficult challenge in this descent will be to decompress the tension that has only risen between those for and against the impeachment. Brazil is facing a dramatic economic crisis and the way out of it will require substantial efforts from all sectors of the society. Brazil cannot afford to remain divided. Maybe some radicals in both camps will continue to fight but the vast majority of the population should find some common ground and move forward. I don’t think this will happen naturally. Leadership is required. Urgently.

Felipe Monteiro is an Assistant Professor of Strategy at INSEAD.