The Man Behind America’s Supercar 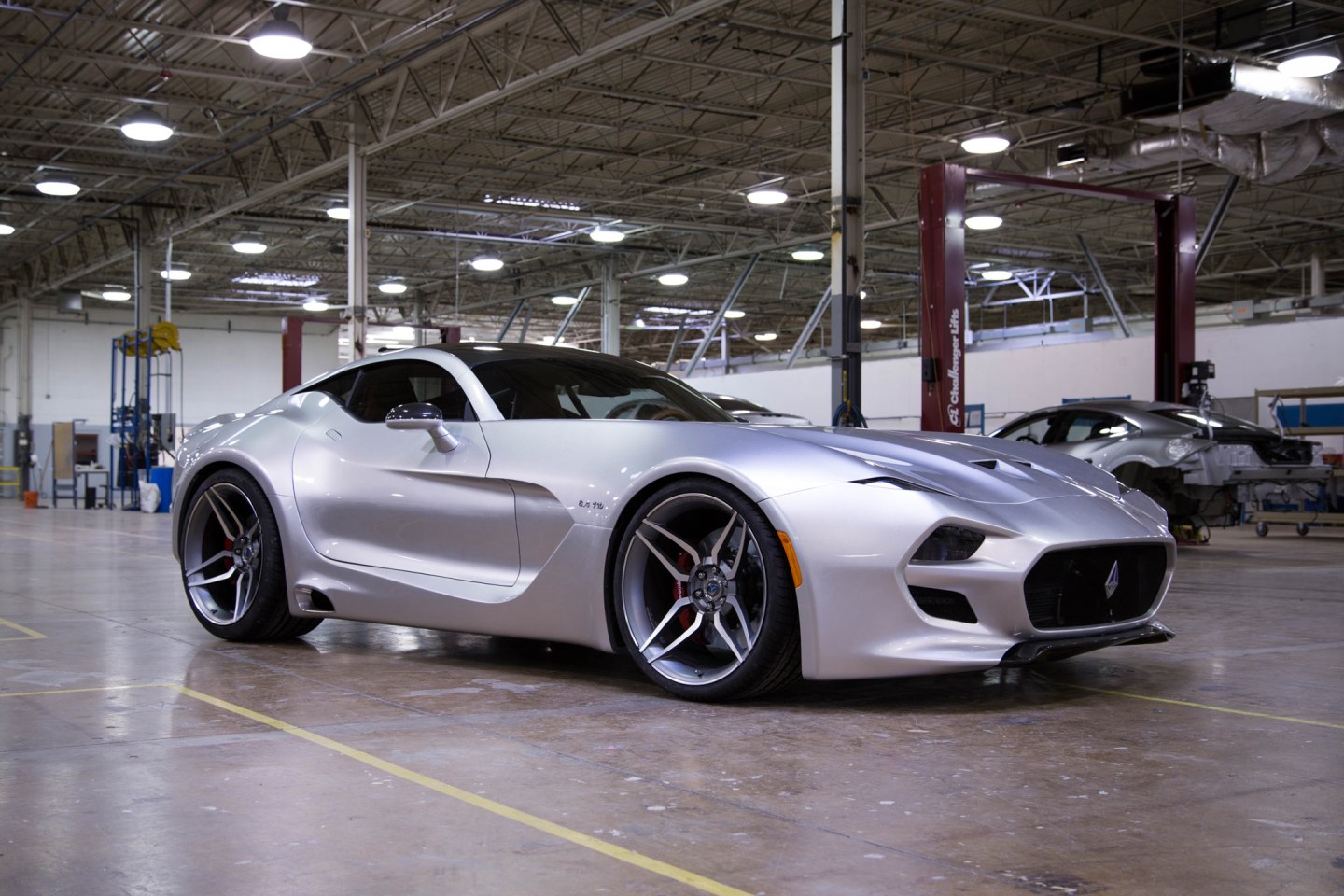 When VLF Automotive’s Fisker Force 1 debuted in January at the 2016 North American International Auto Show, it not only marked the beginning of a new innovative force in the industry, but the rebirth of the American supercar. A comprehensive conversion of the Dodge Viper, the 745 hp muscle machine carries an 8.4-liter V-10 engine, can roar from zero to 60 mph in 3 seconds, and has a top speed of 218 mph. Starting at $268,500, only 50 examples will be made with production beginning this month.

The collaborative dream of famed designer Henrik Fisker and renowned race car driver Ben Keating, the vehicle is both an unapologetic tribute to its powerhouse predecessors and a daring new direction for the current market. RobbReport.com recently spoke with Fisker and Keating about the Force 1 and how it came to fruition.

RobbReport.com: Henrik, what inspired you to create an American supercar?

Henrik Fisker: When I looked at the automotive landscape in the United States, it became apparent that there were no nationally-made sports cars in the over $200,000 price range. That was surprising since the country is one of the biggest markets in the world for that segment and probably accounts for most of the sales of Ferrari, Lamborghini, and Maserati. Rather than the classic European style, however, I wanted to create a supercar the American way—a raw, pure statement of power and design.

What was the impetus for collaborating with Ben Keating?

HF: Conceptualizing the Fisker Force 1, I concluded that it made a lot of sense to base it on the Dodge Viper. When it came to expertise on the model and increasing performance, everyone I asked directed me to Ben Keating. We clicked right away because Ben had already developed exciting new technology—from active suspension to engine tuning—based off of his racing experience, and all of it was exactly what I had been looking for. What excited me was the authenticity he added to the project. If you look back at the original supercars from 50 years ago, they were really developed with engineering innovations from the track as opposed to many of the ones today that seem imagined by a marketing department.

Ben, what made you such a good fit in the development of the Force 1?

Ben Keating: Well first, you would be hard-pressed to find a motorhead who doesn’t love the Viper and get excited about that classic long-hood look and having a humongous 8.4-liter V-10 engine in front. I have been racing a Viper since 2007, have been the number one Viper dealer in the country since 2009, raced the American Le Mans Series in 2013, and have competed in the International Motor Sports Association series since 2014, so I have been exposed to some of the most brilliant minds in the world when it comes to making cars go fast. My belief was that the best way to sell more cars was to develop high-performance parts, and so I worked with engineers in the paddock and we came up with a big brake kit, an active suspension, and an engine performance kit that adds 100 horsepower. When Henrik called me and told me he wanted to do a conversion of a Viper, we hit it off extremely well and decided that he would handle the design, manufacturing, and marketing, while I took care of all the performance elements and distribution. Together, we felt like we had the whole package.

For more on cars, watch this Fortune video:

Henrik, your three principle pillars of design are proportion, sculpture, and graphics. How did these come to play in this car?

HF: I really had to think about what it meant to make a car in this category and so returned to the original Shelby Cobra coupe. When I look at that model or other similar vehicles from the time period, I am struck by how honest they are about showing power in their form, and that was something I wanted to bring through in this design. Sculpture was a very big part of the process and is what makes the car so exciting to see in reality. For instance, we needed airflow incorporated into the hood so we sculpted beautiful air intakes and outlets—we didn’t try to hide it. You will also see pronounced sculpture around the wheels.

The graphics also changed dramatically, specifically with the side window, which has a prominent line that ends in a very thin cut at the end of the back window. The front and rear graphics are also unique and mix modern and traditional supercar aesthetics. As far as the proportions, they were already given with the long front end, and we kept the wheelbase the same as on the original chassis.

There was nothing holding me back in designing this car, no outside influence trying to water it down, which is what made it so fun to work on and why I think it will stand out. When this car is seen in the rearview mirror, other motorists will get out of the way.

Ben, what is it about Henrik’s design approach that attracts you?

BK: He never loses sight of his initial vision and is not afraid to be daring. When I saw his first sketch for the Force 1, I thought it was beautiful but that the concept needed to be wider and curvier, almost like a Coke bottle. As we went back and forth through the design process, I was scared. I wanted it to be awesome but was not sure what we would have at the end of the day. When I got a chance to see the finished product for the first time in Detroit, I was blown away. In my opinion, the great-grandfather of the original Viper is the Shelby Daytona Coupe and I feel like the Force 1 is a very modern take on that same design. It has great haunches and curves, a ton of horsepower, and is gorgeous. The ability to look at a chassis and figure out how to turn it into a piece of art is a phenomenal talent that Henrik obviously has in spades.

Ben, what were your specific contributions to the Force 1?

BK: As mentioned, Henrik focused on the design and left the performance component to my team. More than anything else, I am excited by the active suspension system because that is what truly changes the behavior of the vehicle. When adjusting a racecar’s suspension for the track, you have to make compromises. You might set it up to handle really well in a brake zone or a slow-speed corner but not over a high-speed corner, for example. What the active suspension does is connect over 30 different factors, such as electronic stability control, the antilock braking system, and traction control, directly to the onboard computer system, which changes the suspension over 10,000 times per second. What is unique is that it is responding to your inputs, all of the g-loads, the steering angle, brake pressure, throttle angle, speed—all the factors—based on what is going on in that moment, and then gives you the ideal suspension in real time. It is like having a little engineer under the hood who is dialing in the details for whatever comes at you next.

How does the Fisker Force 1 compare to the Viper GT3-R and GTS-R as far as power and performance?

BK: It’s the same but different. The GT3-R and GTS-R are the most amazing racecars I have ever driven, but they are designed for one purpose only. When developing a sports car, you have to appeal to a larger audience, it can’t be single purpose. With that said, the Force 1 has an additional 100 horsepower over the Viper racers, as they are limited with a restrictor to give others a chance in competition. The Force 1 is well-behaved without losing any of that all-American muscle-car feel that we believe buyers want. We don’t need another sissy supercar, and what we are building is as crazy as the original Viper was back in 1994 or the Shelby Cobra in the early ’60s. To strap a 427 V-8 engine into a little bitty aluminum body was just insane back then—and that is the kind of machine we have now with the Force 1.

Why not a hybrid supercar?

HF: It is pretty basic, sometimes you just want to go out and have a giant steak with no salad on the side, and that is what the Force 1 exemplifies, just a brutally honest expression of everything we love about cars. Hybrids and electric vehicles are great, but I think high-end sports cars and supercars should be the last category to consider for this technology. If everyone who owned a hybrid Ferrari drove it every single day, there would be no ecological benefit because there are so few of them. We are only making 50 examples of this model so it makes absolutely no sense to make it hybrid because the investment is gigantic and it ultimately serves no real purpose. I think going hybrid in this high-value, low-production segment is more of a public relations stunt than reflective of wanting to contribute to the environment. The people you really want in hybrid and electric cars are the millions driving to work every day, not the person taking their supercar out on Sunday for an hour or two.

We have to ask about the Champagne holders, where did that idea come from?

HF: We are up against a lot of large luxury manufacturers with giant budgets and this was an easy add. You always want to take a nice bottle of wine or Champagne to a dinner party but it inevitably ends up rolling around in the passenger seat or on the floor, so why not have a great holder? It could also be used for large water bottles or, when racing, a fire extinguisher. But the whole emphasis is on luxurious fun.

How did VLF Automotive come about?

HF: When Ben and I started developing the Force 1 we were looking for a place to build it. I contacted the former vice chairman of General Motors, Bob Lutz, and industrialist Gilbert Villarreal. The two had formed VL Automotive, a small manufacturing facility in Auburn Hills, Michigan. The site was previously used by a German engineering company for making several hundred vehicle prototypes, so it had everything we needed. Since Bob and Gilbert were already working on a V-8 version of one of my designs, they asked me to join them. We share the same philosophy on small, low-volume programs and the same aversion to becoming a large company—it made sense. The decision happened over the course of a lunch and they just added an “F” to the name and we decided to go for it.

What is your vision for the Fisker Force 1 and VLF Automotive going forward?

HF: The Force 1 is obviously an extreme project and an endeavor enclosed in and of itself at this point so we will see where it goes. In terms of VLF, it is really the type of company set up to do these projects. There is no pressure to come up with a whole bunch of ideas or sell a certain volume. We are one of the smallest car companies in the world, certainly in the United States, and can cater to a small group of people who dare to be different and want something unique. Currently we are working on the Destino V-8 but are already looking at what could be next. Bob, Gilbert, and I are three car guys who really just want to do what we love to do. (vlfautomotive.com)

This article originally appeared on RobbReport.com.