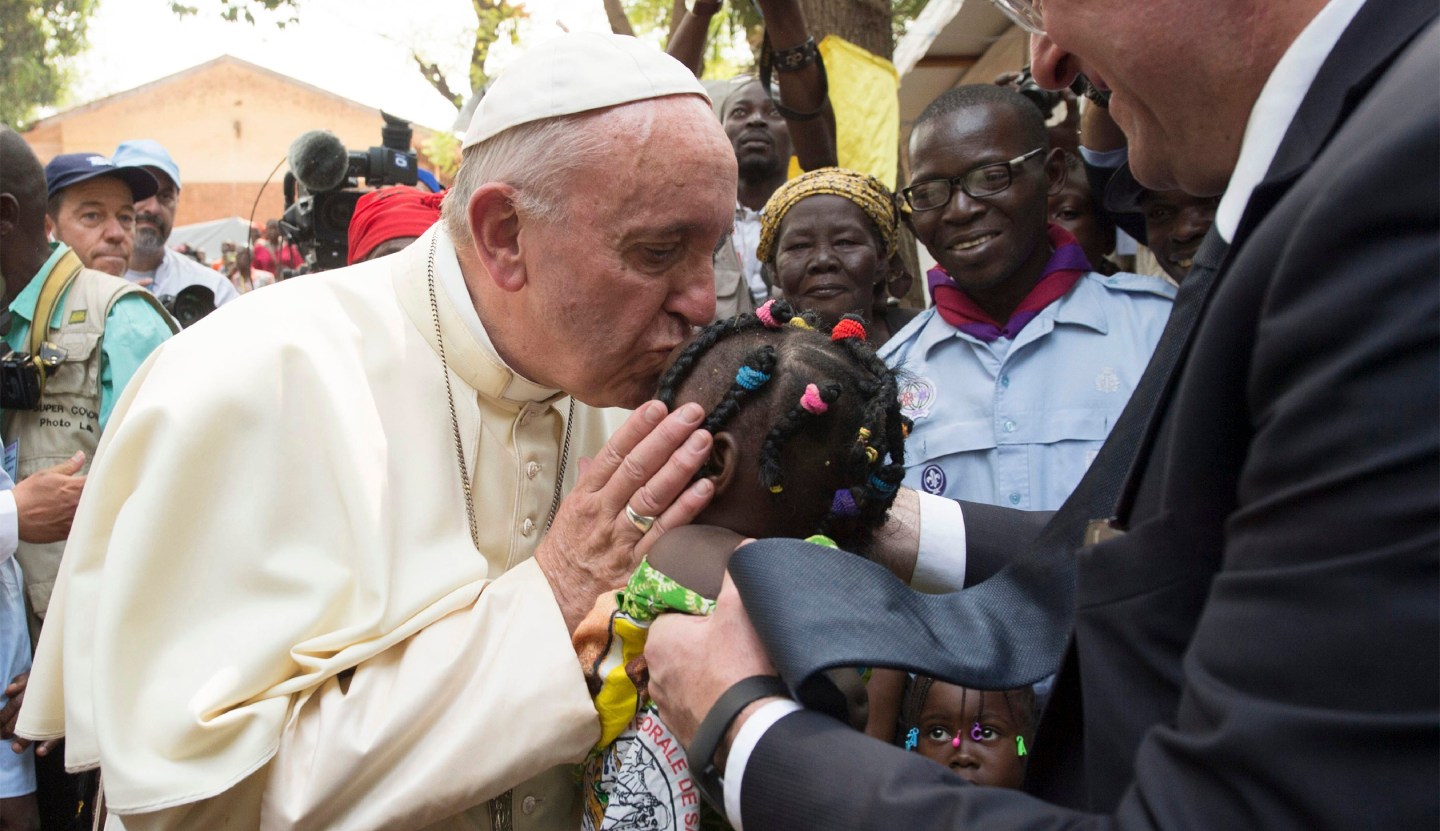 Pope Francis kisses a baby a refugee camp, in Bangui, Central African Republic, Sunday, Nov. 29, 2015. The Pope has landed in the capital of Central African Republic, his final stop in Africa and where he will seek to heal a country wracked by conflict between Muslims and Christians. (L'Osservatore Romano/Pool Photo via AP)
L'Osservatore Romano — AP

In his first major teaching on family issues, Pope Francis advances the power of local bishops to include divorced and remarried Catholics in church life, perhaps even letting them celebrate the Eucharist, while largely sidestepping hot-button social issues like gay marriage and married clergy.

The drama around this document—titled “Amoris Laetitia,” Latin for “The Joy of Love”—has been building for more than two years, ever since Pope Francis first announced he would call Catholic bishops together to examine modern family crises around the world.

The document is Pope Francis’ official response to the two major meetings of bishops he hosted at the Vatican to discuss marriage and family issues—the Extraordinary Synod on the Family in 2014 and Synod of the Bishops in 2015.

In line with Vatican custom, Pope Francis considered the bishops’ insights from these events, added his own, and wrote a formal teaching to guide the church on the issues. The result is this 270-page formal letter, called an apostolic exhortation, addressed to bishops, priests, married couples, and lay people about “love in the family.”

The letter is more about pastoral method than doctrine about the marriage itself. Pope Francis seeks to encourage families with practical guidance amid the myriad of challenges they face around the world, including unemployment, migration, poverty, gambling, alcoholism, polygamy and societal pressures that ignore the longstanding Catholic teaching of marriage. The document notes that what seems normal for a bishop on one continent is considered “strange and almost scandalous” for another, and he wants local bishops to seek local solutions.

“I understand those who prefer a more rigorous pastoral care which leaves no room for confusion,” Pope Francis says. “But I sincerely believe that Jesus wants a Church attentive to the goodness which the Holy Spirit sows in the midst of human weakness, a Mother who, while clearly expressing her objective teaching, ‘always does what good she can, even if in the process, her shoes get soiled by the mud on the street.’”

This openness can at times seem to give vague answers. Pope Francis says that divorced and remarried people are “not excommunicated” and should not feel “discriminated against”—he stops short of directly saying they are welcome to take the bread and wine at Eucharist, but then adds in a footnote: “I would also point out that the Eucharist ‘is not a prize for the perfect, but a powerful medicine and nourishment for the weak.’”

On Wednesday, two days before the letter’s release, he met with a support group for divorced and remarried couples. In September, he made it easier for couples to obtain an annulment, which is not a divorce but a finding by Catholic officials that a marriage between a man and a woman was not a real marriage—a necessary step to return to celebrating Eucharist in the church now.

Several others of his most interesting lines are also the least clear. “The experience of the broad oriental tradition of a married clergy could also be drawn upon,” he writes, without specificying what that means in the context of the debate over married clergy in non-Eastern traditions. As expected, Pope Francis reminds Catholics that gay marriage is not marriage and that couples that cohabit are still in “irregular” unions. He only mentions gay marriage twice, but he also suggests that unions that are not marriages in the Church’s eyes can offer limited wisdom: “The Synod Fathers stated that the Church does not disregard the constructive elements in those situations which do not yet or no longer correspond to her teaching on marriage.”

Pope Francis does name a few specific policies he wants churches to implement. Local churches, he says, need to develop and deepen programs for marriage preparation—engagement periods are often too short, and couples need more training before they walk down the aisle. There should also be specialized regional counseling centers for families going through crises, he says, especially separation and divorce. He also asks for pastoral programs for migrant families and the relatives they’ve left behind.

Much of his teaching on marriage for spouses is fairly simple, similar to what one would expect from a local parish pastor. Don’t be arrogant, especially to non-believing family members. Forgive and trust each other. Show affection. Don’t keep secrets from each another. Be open-minded. Care for the elderly. Don’t fall asleep with your electronic device because it might mean you are ignoring your spouse. For churches, he also offers some practical suggestions: train ministers to better help families, mentor young couples, and encourage couples especially when they have young children or are empty-nesters.

To look at this document simply for a definitive Francis answer on a controversial topic misses the bigger picture. Pope Francis is trying to create a new culture of how bishops lead, and he wants them to think first of the person and her circumstances, instead of doctrine in the abstract. He sets the example and references teaching of bishops conferences frequently in the letter, including those in Spain, Korea, Mexico, Columbia and Kenya. It is important to remember that this teaching is for the world’s 1.2 billion Catholics, not just a subset in a specific country.

One of the most important parts of this teaching may not actually the letter itself, but the conversation it has provoked for the past two years. The synod gatherings themselves were particularly heated, but brought dialogue about issues that can get ignored. At the three-week meeting in 2014, one of the bishops’ working documents sparked a media firestorm when it included a section called “Welcoming homosexual persons.” Interpreters looking for revolution quickly learned they’d overreached. The section was later struck down, but a point had been made: Catholics across the world were deeply discussing issues, which is the Francis way.

Mercy, in the end, remains his constant theme. “No one can be condemned for ever, because that is not the logic of the Gospel!” he writes. “Here I am not speaking only of the divorced and remarried, but of everyone, in whatever situation they find themselves.”