Here’s Why the Blockchain Would Have Saved Lehman Brothers 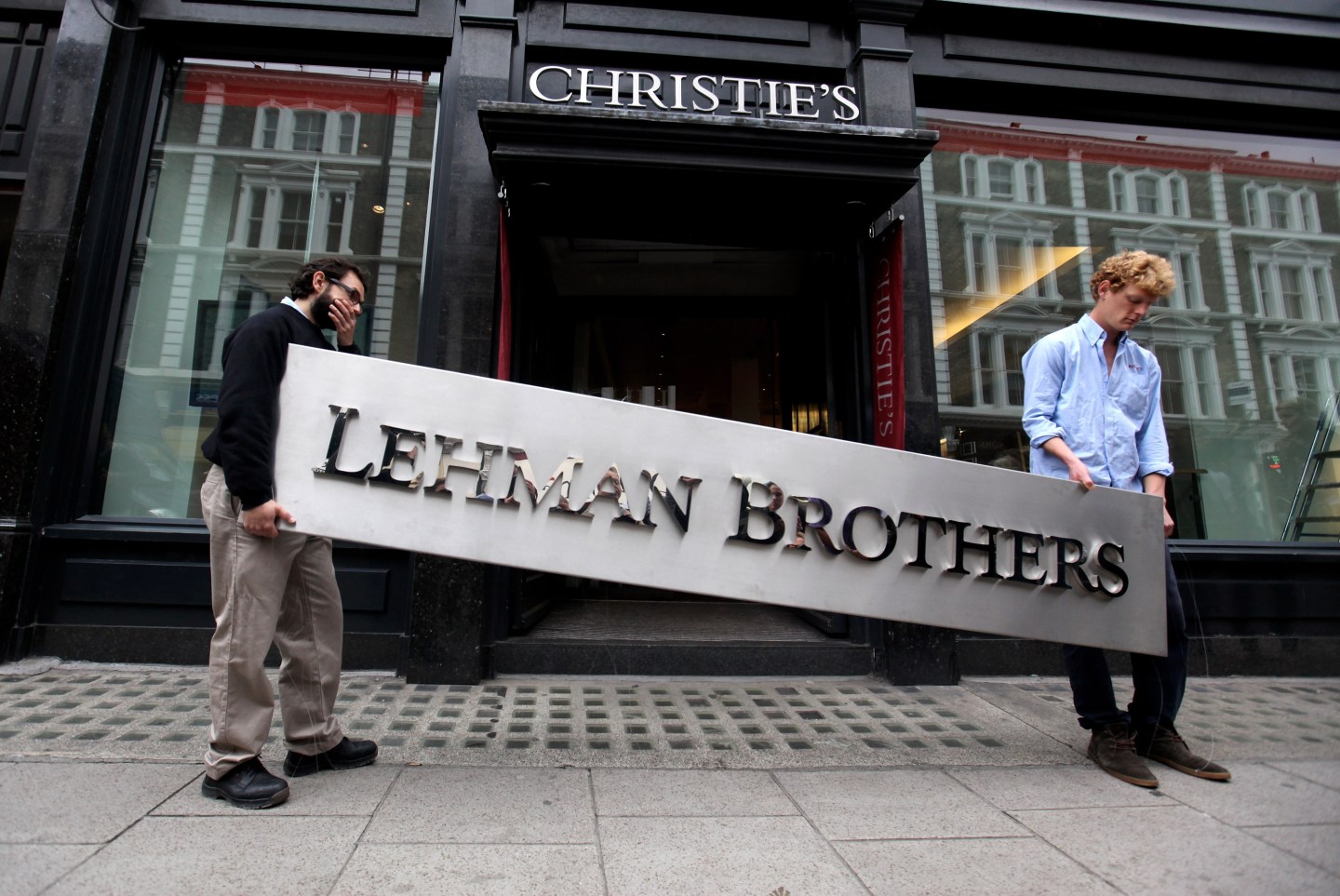 LONDON, ENGLAND - SEPTEMBER 24: Two employees of Christie's auction house manoeuvre the Lehman Brothers corporate logo, which is estimated to sell for 3000 GBP and is featured in the sale of art owned by the collapsed investment bank Lehman Brothers on September 24, 2010 in London, England. The "Lehman Brothers: Artwork and Ephemera" sale will take place on September 29, 2010, on the second anniversary of the firm's bankruptcy, and comprises of artworks which hung on the walls of Lehman Brothers' offices in Europe. (Photo by Oli Scarff/Getty Images)
Photograph by Oli Scarff

Bitcoins could have saved Lehman Brothers, sort of.

On Tuesday, J. Christopher Giancarlo, a commissioner of the Commodity Futures Trading Commission, said that if the blockchain—the technology that backs bitcoins—had been around in 2008, and had Lehman Brothers used it, then the investment bank bankruptcy that officially kicked off the financial crisis would never have happened.

Giancarlo claims that the use of a blockchain, which is the digital accounting protocol that currently powers Bitcoin transactions but is increasingly being tested for other transactions, would have made it plainly obvious to regulators that the company’s financial moves were veering off into tenuous territory. “If an accurate [blockchain] record of all of Lehman’s transactions had been available in 2008, then Lehman’s prudential regulators could have used data mining tools, smart contracts and other analytical applications to recognize anomalies,” says Giancarlo. “Regulators could have reacted sooner to Lehman’s deteriorating creditworthiness.”

Based on that, Giancarlo says regulators should not get in the way of banks that have recently been testing using the blockchain for uses. Giancarlo compared the emergence of blockchain to the Internet’s evolution, and urged adopting a “do no harm” regulatory doctrine towards the development of blockchain identical to the edict the government made regarding the growth of the Internet more than 20 years ago.

Accomplishing a “do no harm” mandate would require the various regulatory agencies, including the FDIC, CFPB, and FinCEN, among others, to work together to form a simple guiding framework that the banks could follow without worry over whether or not they are jumping through the all the different hoops these agencies would otherwise set up on their own. Fortune reported in December that J.P. Morgan Chase and other banks were testing blockchain technology.

Nonetheless, it’s not clear blockchain is a financial crisis silver bullet. In fact some derided Giancarlo’s comments as crazy.

Ely even thinks it’s pie in the sky to think regulators will work together to get blockchain off the ground. Cross-organizational teamwork is not a particularly strong suit amongst regulatory agencies, he says. “These agencies are bureaucratic fiefdoms,” Ely said. “They get jealous of each other. They have turf wars. They don’t play together well. And even if they did try to work together, they have genuinely different points of view and different philosophies.”

Still, the financial industry has shown interest in blockchain technology, and appears to be slowly testing the waters before any regulation comes down one way or the other.

The aforementioned DTCC, which is owned by a large collection of major banks, hedge funds, and other financial intermediaries, exists solely to keep a database of what its owners buy and sell with each other. On Wednesday, it announced plans to work with the blockchain startup Digital Asset Holdings, which is headed by former top J.P. Morgan bankers Blythe Masters, to keep track of repurchase agreements sold between its member banks. Among Digital Asset’s investors are J.P. Morgan Chase, CME Group, and most recently Australia’s main exchange operator, ASX.