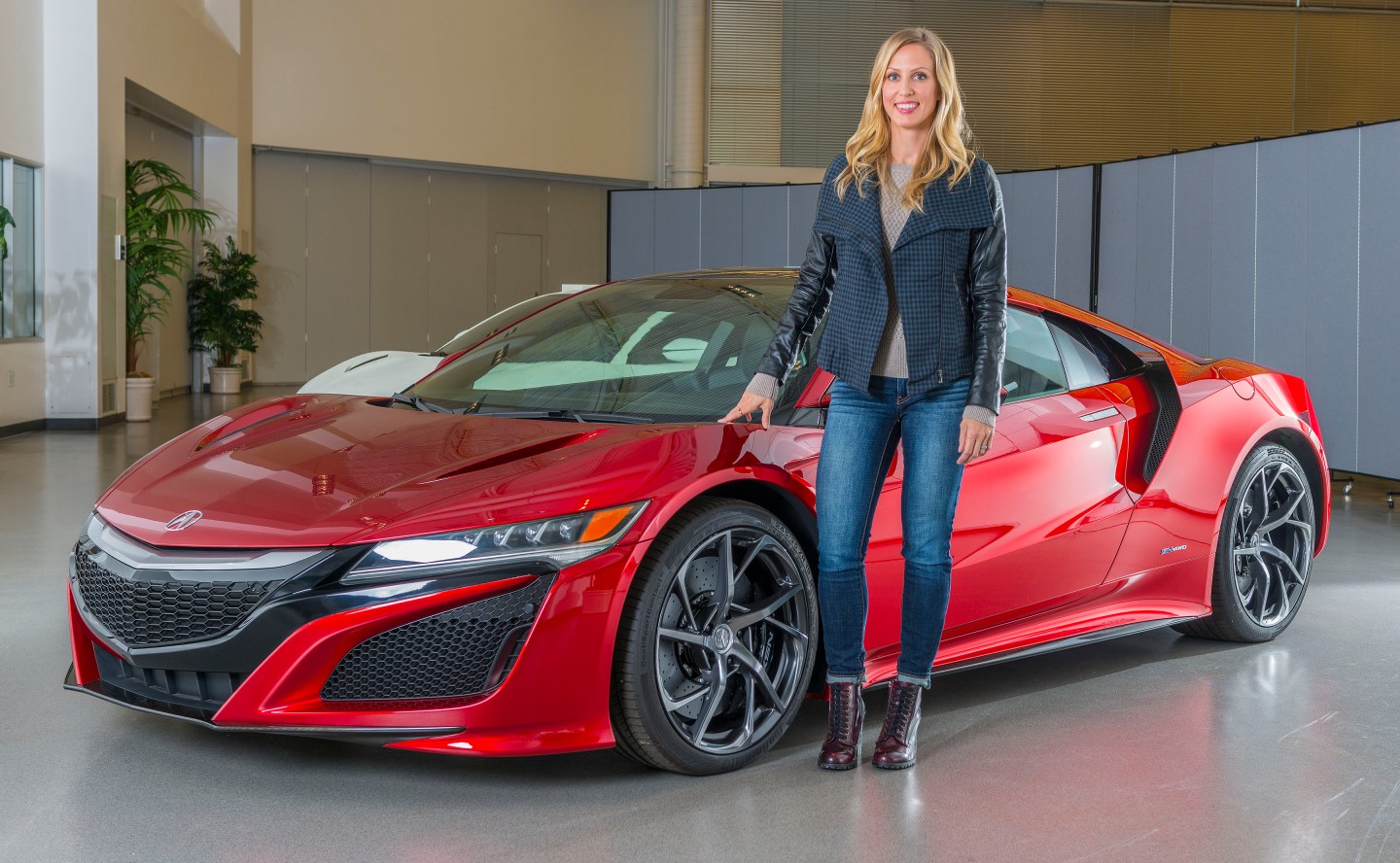 Walking onto the floor of the New York International Auto Show, gearheads will no doubt be dazzled by the rows and rows of glossy cars, trucks, and SUVs. But for those keeping close tabs on trends in the auto industry, the more dazzling thing may be how many of those vehicles were designed or engineered by women.

While there’s no doubt that the automotive industry is still dominated by men, women are beginning to make important inroads. The most obvious example, of course, is Mary Barra, CEO of General Motors, the largest automaker in the U.S. However, there is also a small but growing cohort of women who are starting to make their mark in car design and engineering.

While the industry doesn’t track women by specific role, we do know that women hold 27% of entry-level automotive roles and 18% of mid-leadership positions, according to Michigan-based women’s networking group Inforum. What’s more, those numbers are expected to grow in coming years.

Meet four of the women behind the vehicles on display this weekend.

How she got there: Christensen is the first woman to lead design on a supercar—the industry term for extra powerful, extra expensive sports cars. She directed the eight-person team responsible for Acura’s resurrection of the NSX, Jerry Seinfeld’s favorite supercar, which ended production in 2005. “They wanted an emotional, 3-D kind of feeling,” Christensen says. “My priority was to keep that.” Prior to designing the NSX, she worked on Acura’s RLX sedan and its now-discontinued ZDX crossover. She grew up working on muscle cars with her father in their San Jose, Calif. garage and got her design chops at Pasadena’s Art Center College of Design.

Why cars: “When I first decided to pursue car design, I was simply following something I was passionate about. It wasn’t until I got to know more about the industry that I realized there was a need for more female perspective and hence, a big opportunity.”

My experience as a woman: “I’m asked this question a lot, and it’s hard to answer because I never know what to say. I’m just focused on designing the best possible car.”

What’s special about the Acura NSX: “Every part of the car, from the taillights to the floating C-pillars, is designed to fade into the background so that it just feels like you and the road. We spent a lot of time designing the air intakes and testing the car’s aerodynamics at our company’s wind tunnel in Ohio.”

How she got there: Hamblin led the dynamics team responsible for the performance of the 2016 Honda Civic, the brand’s most important car and winner of the prestigious North American Car of the Year award this year. Hamblin earned degrees in mechanical engineering at Penn State and the University of Dayton before joining Honda as an engineer working on vehicle suspension and steering in the research and development department. “Rather than having sought out the automotive industry, it found me,” Hamblin says. “My education in mechanical engineering proved to be a perfect fit in vehicle development.” Before joining the Civic project, Hamblin helped develop the Odyssey minivan.

Why cars: “If someone had asked me growing up where I envisioned my future self, I never would have thought it would be in automotive development. Yet, it’s offered me the ability to apply my interest in engineering to products that bring joy to a lot of people, new and interesting challenges, the opportunity to work with a talented global team, and of course, lots of drive time in awesome cars.”

My experience as a woman: “There’s no doubt that you’ll find fewer women than men in the automotive field, and especially inside vehicle development. Our global team ensured we had significant diversity in all areas. I believe that was key to creating such a remarkable product.”

What’s special about the Honda Civic: “Because it was my responsibility to lead the development of Civic’s vehicle dynamics, I find a lot of pride in the car’s steering, ride, handling and stability, which is truly impressive. We really pushed the envelope by benchmarking the Civic, an entry-level vehicle, against European luxury competitors like the Audi A3. And it shows. Being awarded the North American Car of the Year was the icing on top.”

How she got there: A General Motors lifer, Wetzel joined the company 30 years ago after graduating from the University of Michigan with a degree in industrial design. She credits a tour of GM’s Warren, Mich.-based design center during her student days with inspiring her career path. “A car is the ultimate expression of one’s personal style and taste,” Wetzel says. “It is fashionable, functional, romantic, enabling a sense of freedom to go out there and experience life.” She was named GM’s first female vehicle chief designer in 1997. A native Detroiter, Wetzel is the fourth generation of her family to work in the industry.

Why cars: “Cars are cool. They are not like any other product in our lives. As a designer, I love the challenge of using both sides of the brain—the creative, inspired artist as well as the thoughtful problem-solver who works with engineering and manufacturing to get the car on the road and into the customers’ hands.”

Her experience as a woman: “When I first started years ago, women were almost viewed as a novelty. It has gotten a lot better, but the proportion of women in this industry still has room to grow. With Mary Barra at the helm, I am confident more women will become inspired to seek out the auto industry as a career choice.”

What’s special about the Buicks at the show: “When we set out to design interiors for the Envision crossover, Cascada convertible and LaCrosse sedan, our goal was to create an experience for our customers and a sense of wellbeing. Our customers view their cars as their sanctuary, so we are designing harmonious interiors with thoughtful details that connect on an emotional level.”

How she got there: Whitley, U.K.-based Gallagher held several positions at Jaguar Land Rover, including global brand manager for the new Jaguar F-PACE SUV, before being promoted to senior launch manager for Jaguar Sports and Lifestyle cars. She was also responsible for the launches of the Jaguar XJ and XJR sedans. “Being the voice of the customer into the product development teams means that I am usually the only female in the meetings so I had to learn quickly to speak up and challenge the team,” Gallagher says. “I found that I can also give a different perspective so we end up with a more balanced discussion or even solutions we wouldn’t have found with an all-male team.”

Why cars: “There is something really special about how a car can make you feel. I have always loved cars—from the age of about five I used to spot cars by their taillights, I knew I had to get a job in automotive.”

My experience as a woman: “You have to prove yourself twice, first because you are a woman and secondly to show that you can do the job. I did get told once very early on in my career that I would have to change my voice if I wanted to succeed in automotive, as it was simply ‘too high.’ In another role at Ford, one of the retailers tried to get me switched as he wasn’t sure he could deal with an area manager that was a ‘girl.’ Two years later, the day I announced I was moving roles, he called my director to say he needed me to stay.”

What’s special about the F-PACE: “The F-PACE is the only Jaguar that has always had a female marketing manager heading up the program. We needed to protect the coupe-like design, but I also knew that a reason for rejecting cars, particularly from women, in this segment is rear visibility. Our target customer would have children in the rear so we had to ensure as many children as possible can see out of the windows.”