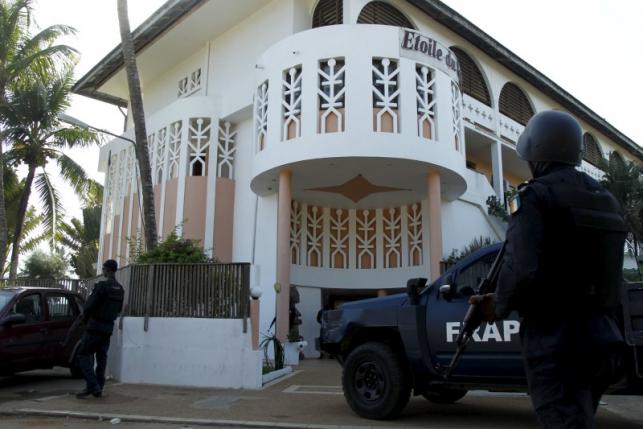 Gunmen from the North African branch of Al Qaeda killed 16 people, including four Europeans, at a beach resort town in Ivory Coast on Sunday, the latest in a string of deadly attacks across West Africa.

Six shooters targeted hotels on a beach at Grand Bassam, a weekend retreat popular with westerners about 40 km (25 miles) east of the commercial capital Abidjan, before being killed in clashes with Ivorian special forces.

“Six attackers came onto the beach in Bassam this afternoon,” said Ivorian President Alassane Ouattara during a visit to the site. “We have 14 civilians and two special forces soldiers who were unfortunately killed.”

A French man was killed in the attack, according to a French foreign ministry spokesman. The nationalities of the other dead was not yet known, but four were European, one officer said during a briefing attended by a Reuters reporter.

The reporter saw the bodies of three white people at Grand Bassam’s Chelsea Hotel and another in the Hotel Etoile du Sud next door.

A U.S. State Department spokesperson, who declined to be further identified, said the department was not aware of any U.S. citizen being injured or killed in the attack “at this time.”

Al Qaeda in the Islamic Maghreb (AQIM), which has carried out other recent attacks in the region, claimed responsibility for Sunday’s shootings, according to the U.S.-based SITE intelligence monitoring group, citing an AQIM statement.

Gunmen all dressed in black opened fire around lunchtime while people were eating and drinking at the beachside bars and restaurants or swimming in the ocean.

“I saw seven dead that I filmed. There were four attackers,” said Dramane Kima, who showed the video of the bodies to Reuters.

He also took pictures of grenades and ammunition clips that he believed had been left behind by the attackers.

Security forces moved to evacuate the area surrounding the beach. Bullet holes riddled vehicles nearby and some windows had been shot out.

“They started shooting and everyone just started running. There were women and children running and hiding,” said another witness, Marie Bassole. “It started on the beach. Whoever they saw, they shot at.”

For more on terrorist organizations, read:

Both of those attacks were claimed by AQIM, raising concern that Islamist militants were extending their reach beyond their traditional zones of operation in the Sahara and arid Sahel region.

Though previously untouched by Islamist violence, Ivory Coast, French-speaking West Africa’s largest economy and the world’s top cocoa producer, has long been considered a target for militants. It has been on high alert since the Ouagadougou attacks.

“France will bring its logistical support and intelligence to Ivory Coast to find the attackers. It will pursue and intensify its cooperation with its partners in the fight against terrorism,” Hollande said in a statement.