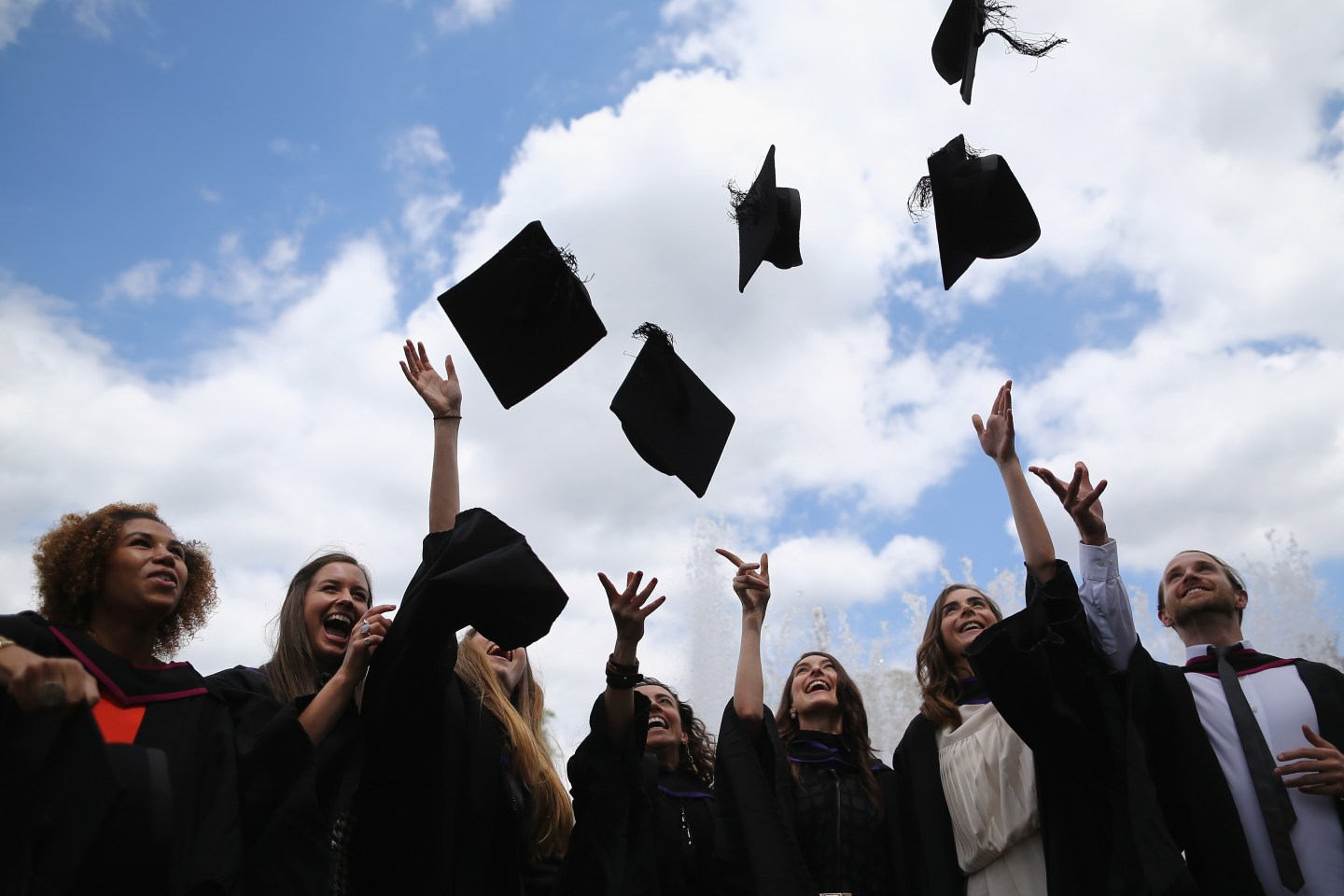 <> at the Royal Festival Hall on July 15, 2014 in London, England.
Photograph by Dan Kitwood—Getty Images

While we continue to worry about the state of both our global and national economy, we always seem to come back to the same questions: is college still worth the trouble? Many of us graduate deep in debt with degrees that we worry may end up being useless considering the apparent scarcity of jobs, but these six employers help put some of those fears to rest.

It’s harder to get a job at Goldman Sachs (GS) than it is to get into Harvard, but it looks like new graduates have a bit of a leg up. In the last 12 months, more than a fifth of the investment bank’s new hires were recent graduates. It recruits new employees on college and university campuses and hosts webinars throughout the year to educate students about opportunities at the company. About three quarters of recent graduate hires come from undergraduate institutions, and a majority are hired on as full time, salaried employees. If they choose to pursue another degree, employees can apply to receive up to $10,000 per year in tuition reimbursement.

Last year, Accenture (ACN) hired more than 90,000 millennials globally. The professional services company says it recruits students with highly varied academic interests. Graduates with MBAs tend to fit well in its strategy and consulting businesses, those with Masters of Public Health can find a place in its health and public service operating group, and STEM-focused students are a good match when it comes to client delivery and operations. The company certainly has room for those without graduate degrees as well. In fact, in fiscal 2015 about 1,725 of Accenture’s new hires came from undergraduate institutions. Though it doesn’t top the list on tuition reimbursement, many companies cap theirs way below the Accenture Strategy Scholarship’s $100,000 maximum.

Approaching ten years on Fortune’s 100 Best Companies list, the professional services firm headquartered in New York hired more than 2,500 recent graduates, making up over a third of the company’s new hires from the last 12 months. Almost evenly split between graduate and undergraduate students, most of the new employees have joined the KPMG team full-time, and all of them have been hired into salaried positions. The company offers a “competitive base pay” which can be supplemented by incentive compensation and spot awards. It focuses on recruiting students that “are committed to ongoing development and improvement,” both for themselves as well as for the team and their clients.

The professional services firm formerly known as Ernst & Young has been on Fortune’s 100 Best Companies list for nearly two decades. It boasts a “culture of inclusiveness and mentoring,” a characteristic that’s attractive to recent students just starting out on their career paths. What may be even more attractive is its offer of unlimited tuition reimbursement, which is particularly good news for the 40% of its newly graduated employees who have earned (likely expensive) graduate degrees. In addition to the recent graduates who received full-time, salaried positions, EY also hired 4,000 interns in fiscal 2015.

The New York-based professional services firm likely has the most intensive recruitment strategy of the six companies, including what it refers to as “early ID conferences. One of those is its Deloitte National Leadership Conference, and Deloitte proudly tells Fortune that nearly two-thirds of the students who attend that program go on to accept full-time employment at the company. In addition to the more than 5,000 recent graduates it employed in the last 12 months, in the current fiscal year Deloitte plans to hire another 700 MBAs and 12,000 full-time students and interns.

Pricewaterhouse Coopers (PWC) focuses mainly on accounting and similar professional services, so it tends to gravitate towards students with MBAs and Ph.Ds in related areas of study. But as tech skills become more important in nearly every field, PwC is snatching up some STEM students as well. Fortune reported earlier this year that the company plans to hire 1,000 more people in 2016, many of which will be new graduates, to focus specifically on cyber security. The vast majority of recent grads tend to be hired on as full time, salaried employees and can receive up to $10,000 per year in tuition reimbursement.

Check out the full list of Fortune’s 100 Best Companies to Work for at fortune.com/best-companies, where you’ll find dozens of job searching tips and secrets from their recruiters on how to get hired.