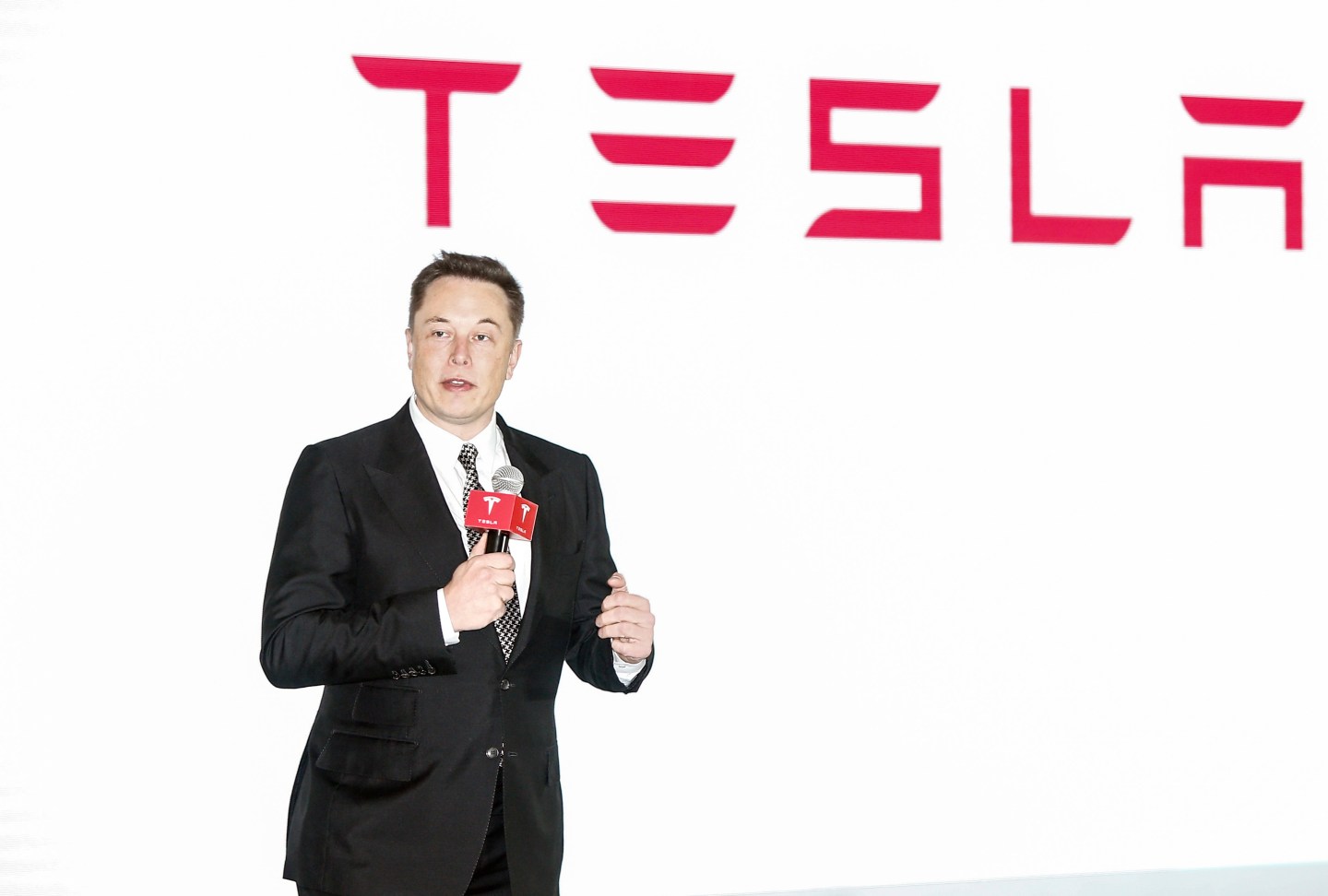 BEIJING, CHINA - OCTOBER 23: (CHINA OUT) Elon Musk, Chairman, CEO and Product Architect of Tesla Motors, addresses a press conference to declare that the Tesla Motors releases v7.0 System in China on a limited basis for its Model S, which will enable self-driving features such as Autosteer for a select group of beta testers on October 23, 2015 in Beijing, China. The v7.0 system includes Autosteer, a new Autopilot feature. While it's not absolutely self-driving and the driver still need to hold the steering wheel and be mindful of road conditions and surrounding traffic when using Autosteer. When set to the new Autosteer mode, graphics on the driver's display will show the path the Model S is following, post the current speed limit and indicate if a car is in front of the Tesla. (Photo by ChinaFotoPress/ChinaFotoPress via Getty Images)
Photograph by ChinaFotoPress via Getty Images

It won’t be long before Tesla’s low-cost Model 3 is available for preorder.

Tesla CEO Elon Musk on Thursday announced on his Twitter account that the Model 3 reservation process will begin on March 31 in the company’s stores and April 1 online. In order to reserve the Model 3, customers will need to plunk down $1,000 in cash. In a separate tweet, Musk said the Model 3 will not come in a more-expensive “signature series,” so the $1,000 will apply to all reservations.

Tesla is one of the world’s leading electric vehicle makers, offering the Model S sedan and the Model X sport-utility vehicle. Both cars are all-electric and have been largely purchased by consumers with means. The Model S, for instance, starts at $75,000 before tax incentives are factored in. The Model X is available for reservation and will ship this year. The Model X will cost $80,000 to start.

The Model 3, however, is what Tesla hopes can bring its brand to the mainstream. Musk, who has been touting the Model 3’s affordability for months, says it will start at $35,000 before tax incentives are factored in. Tesla has promised that the Model 3 will deliver 200 miles of range on a single charge and still come with an attractive design and other accouterments commonly found in a Tesla vehicle.

So far, however, Musk has only talked about the Model 3 and will not show off the car until March 31. He has said that Tesla likely won’t start shipping the Model 3 until late 2017.

Tesla (TSLA) on Wednesday announced its earnings, and quickly saw its shares surge in after-hours trading. Shareholders were particularly pleased with Tesla’s forecast that it would deliver between 80,000 and 90,000 Model S and Model X vehicles in 2016, beating Wall Street’s expectation of about 79,000 cars, according to research firm FactSet StreetAccount. Tesla also said it would be able to achieve profitability on a non-GAAP basis in 2016 and be net cash flow positive by the end of the year.

Ultimately, Musk says he wants to boost Tesla’s car shipments to 500,000 per year by 2020—about five times what it expects to achieve in 2016. The Model 3 is critical to that effort, since it will attract a broader consumer base.

Still, questions abound over whether Tesla can indeed get the Model 3 down to $35,000.

A column published on The Conversation last year by Matthew N. Eisler, a visiting assistant professor of integrated science and technology at James Madison University, questions whether Tesla could reduce its own costs to get the Model 3 price down. Eisler specifically questioned whether Tesla could substantially reduce the price on its battery packs to a level that could sustain a $35,000 price tag. He also questioned how customer service could suffer with a low-cost car in the mix.

“Even if Tesla Motors successfully produces the automobile at scale, it is questionable whether the company will be able to sustain its high standard of customer service, which is costly,” Eisler wrote.

For more on Elon Musk and Tesla, watch:

For his part, Musk has shared nothing but confidence in Tesla’s ability to get a high-quality $35,000 car on the road, and is expected to be similarly bullish on its chances of success on March 31 when it unveils the new car.

“That’s it for now,” Musk said in his final tweet Thursday.