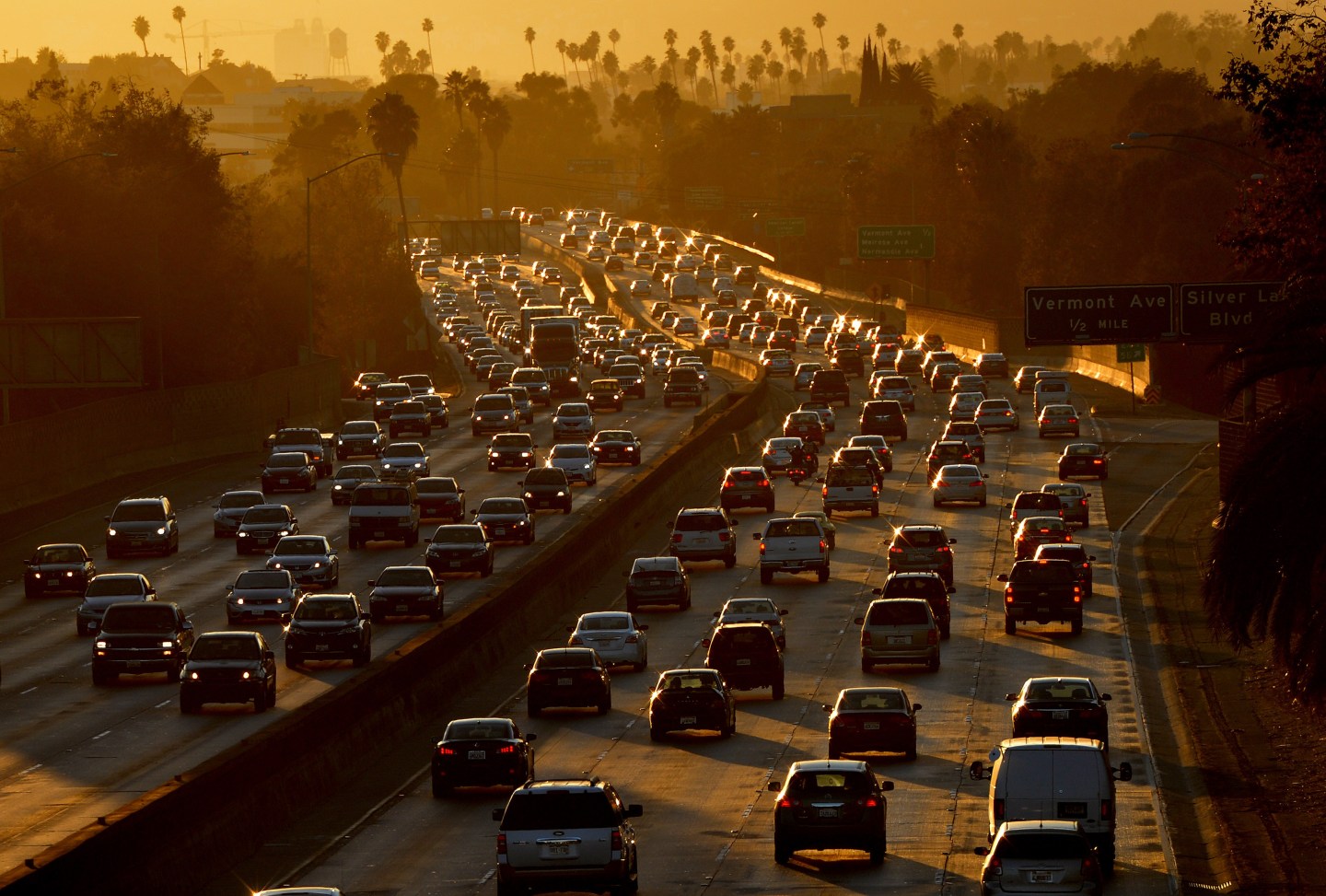 Commuters looking to get around Los Angeles typically have two unappealing choices: endure a soul-sucking drive in stop-and-go traffic, or traverse a convoluted mix of public transit, taxis, and ride-hailing services. The second largest metro area in the U.S. has some of the worst traffic congestion in the country, a problem that is magnified by its sprawling footprint.

But of all the companies that could have broken the city’s epic gridlock, Xerox—better known for making copies than counting cars—has developed a software platform designed to make travel in and around Los Angeles, easier, cheaper, and faster. Xerox’s (XRX) new platform powers an Android and iOS app called Go LA, which was launched this week by the city of Los Angeles.

Go LA aggregates and calculates the time, cost, and carbon footprint of every mode of transportation available on a route, including public transit, driving a car, biking, and using a ride-hailing services. By having all the possible trip information together in a single app, users can use it to search for the cheapest, fastest, or greenest route to their destination. And as Go LA learns about its users’ individual travel preferences, it will eventually recommend and highlight personalized commuting options.

And in true health-conscious, California style, it will even calculate how many calories are burned using the various combinations of transportation, a feature that will come in handy this summer when a public bike-sharing program launches and is folded into a future app update.

The fact that Xerox, and not a company like Google, is spearheading this initiative is perhaps the biggest story here. “This is obviously very different from our core Xerox business,” David Cummins, senior vice president of parking and mobility solutions at Xerox told Fortune. “We like to solve intractable public problems; we see complicated, messy governmental-related problems as business opportunities.”

In 2010, Xerox expanded beyond its traditional copier and printer business when it purchased Affiliated Computer Services, a company that handled back-office operations for businesses and governments. With the purchase, Xerox got into the transportation management business. The company now processes some 200 million trips a day in public transit around the world, according to Cummins. It also manages electronic tolls on U.S. highways, speed and red-light photo enforcement, and parking for most major U.S. cities.

“Today, there are at least a dozen ways to get from point A to point B in major cities,” said Cummins. “You might look at the Lyft app, the Uber app, look up the bus, subway, light-rail schedules, maybe a car-sharing service like Zipcar. It’s too many options, and too many apps and websites to search, to figure it out.”

And through its efforts, Xerox has quietly become a leader in smart parking by adding credit card and pay by mobile technology, making the company well-poised to funnel this mess of paid transport into a one-transaction solution. In fact, future updates to Go LA will include a single payment system that lets users to pay for all public and private transportation through the app.

For what Uber is doing with its data to ease traffic:

The app is cleverly designed to encourage participation among normally competitive companies like Uber and Lyft. Users, for instance, can’t simultaneously compare the cost difference between Uber and Lyft.

“This wasn’t just a technical challenge for us,” Cummins said. “Companies have to be able to trust that the data won’t be used against them, that their competitive data will be protected.”

Meanwhile, commuters will like that data collected from Go LA is anonymous. And while the city won’t be able to track a particular person’s location it will receive information such as popular destinations, most-used modes of transportation, and peak travel times.

For more read After 35 years at Xerox, Ursula Burns is still learning

This data could be particularly helpful for city planners prioritizing where to invest in infrastructure, according to Seleta Reynolds, general manager of the Los Angeles Transportation Department.

Meanwhile, Xerox is also moving ahead, working on a similar project with Denver as well as smart parking pilot projects in other U.S. cities, including Washington D.C., which not coincidentally has the worst traffic in the country.