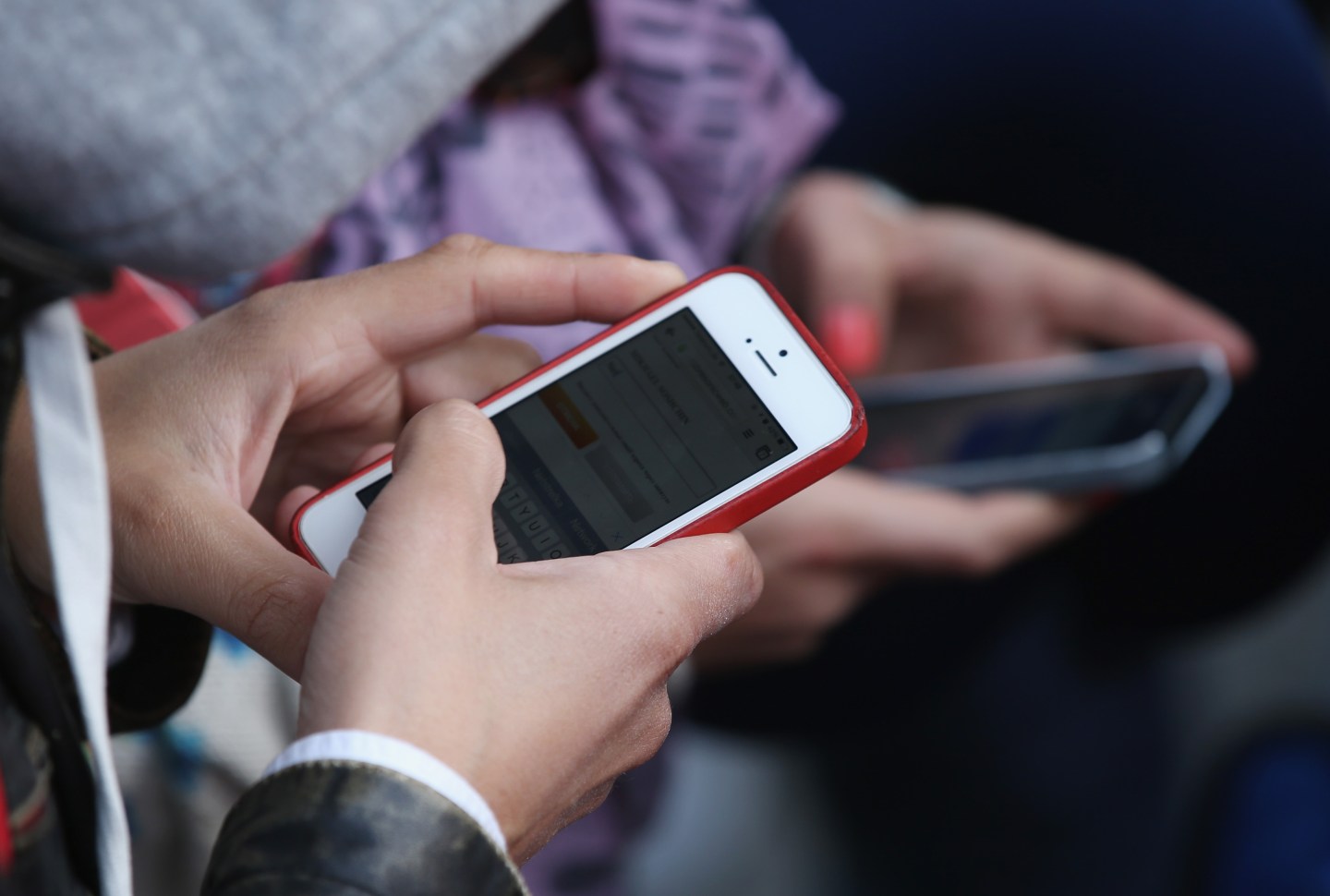 BERLIN, GERMANY - SEPTEMBER 19: People type on older model Apple iPhones as they wait to enter the Apple Store at 8am on the first day of sales of the new Apple iPhone 6 in Germany on September 19, 2014 in Berlin, Germany. Hundreds of people had waited in a line that went around the block through the night in order to be among the first people to buy the new smartphone, which comes in two versions: the Apple iPhone 6 and the somewhat larger Apple iPhone 6 Plus. (Photo by Sean Gallup/Getty Images)
Photograph by Sean Gallup — Getty Images

If there’s anything we learned in 2015, it’s that we’re obsessed with mobile devices.

Time spent on mobile devices was up 117% in the year compared to 2014, Flurry, a Yahoo-owned analytics company, said in a report on Tuesday. The data, which looks at worldwide smartphone and tablet use, found that usage among “phablet” owners, or those who have a large-screen smartphone, was up 334% year-over-year. In comparison, usage time was up 81% for small-screen slates and 26% for larger tablets.

By 2017, Flurry said that phablets will top smaller smartphones be the most-used mobile device type.

Phablets are a category of smartphones with large screens (generally in excess of five inches). While the devices have been available for a few years, phablet usage started to explode in 2014 following to premiere of Apple’s big-screen iPhone 6 Plus. Apple has since introduced an updated (and similarly popular) phablet in the iPhone 6s Plus. Meanwhile, competitors, including Samsung, LG, and others, have also found a welcoming marketplace for their own phablets.

Phablet popularity has translated to a significant growth rate in the way people access apps on those devices. For instance, Flurry found that between 2014 and 2015, use of news and magazine apps on phablets was up 721% year-over-year, compared to 135% across all mobile devices, including phablets. Use of sports apps was up 274% on phablets during the same period.

Flurry, which bases its information by tracking app usage on 2.1 billion smart devices around the world, found that total mobile device usage was up 58% in the last year. Although the rate was up, it was down from the 76% growth rate the mobile industry tallied in 2014.

The study did not disclose actual amount of time spent.

WATCH: For more on Apple’s phablets, check out this Fortune video:

“While the growth rate has declined, it remains stunning as rates like these are rare in mature industries,” Yahoo senior vice president of product and engineering Simon Khalaf said in a statement. “What was even more impressive is the majority of that growth rate came from existing users versus new users. In fact, in 2015, we estimate that 40% of the 58% total growth in sessions came from existing users, compared to 20% in 2014 and 10% in 2013.”

Despite all of the good news, there was one bit of bad news for the mobile industry in 2015: worldwide game playing fell 1% on mobile devices compared to 2014.

Even so, it’s hard to find rough spots for the mobile industry in 2015. As Khalaf says, it’s “showing a fast increase in mobile addicts.”