Getting Past ‘Overqualified’ in a Job Interview 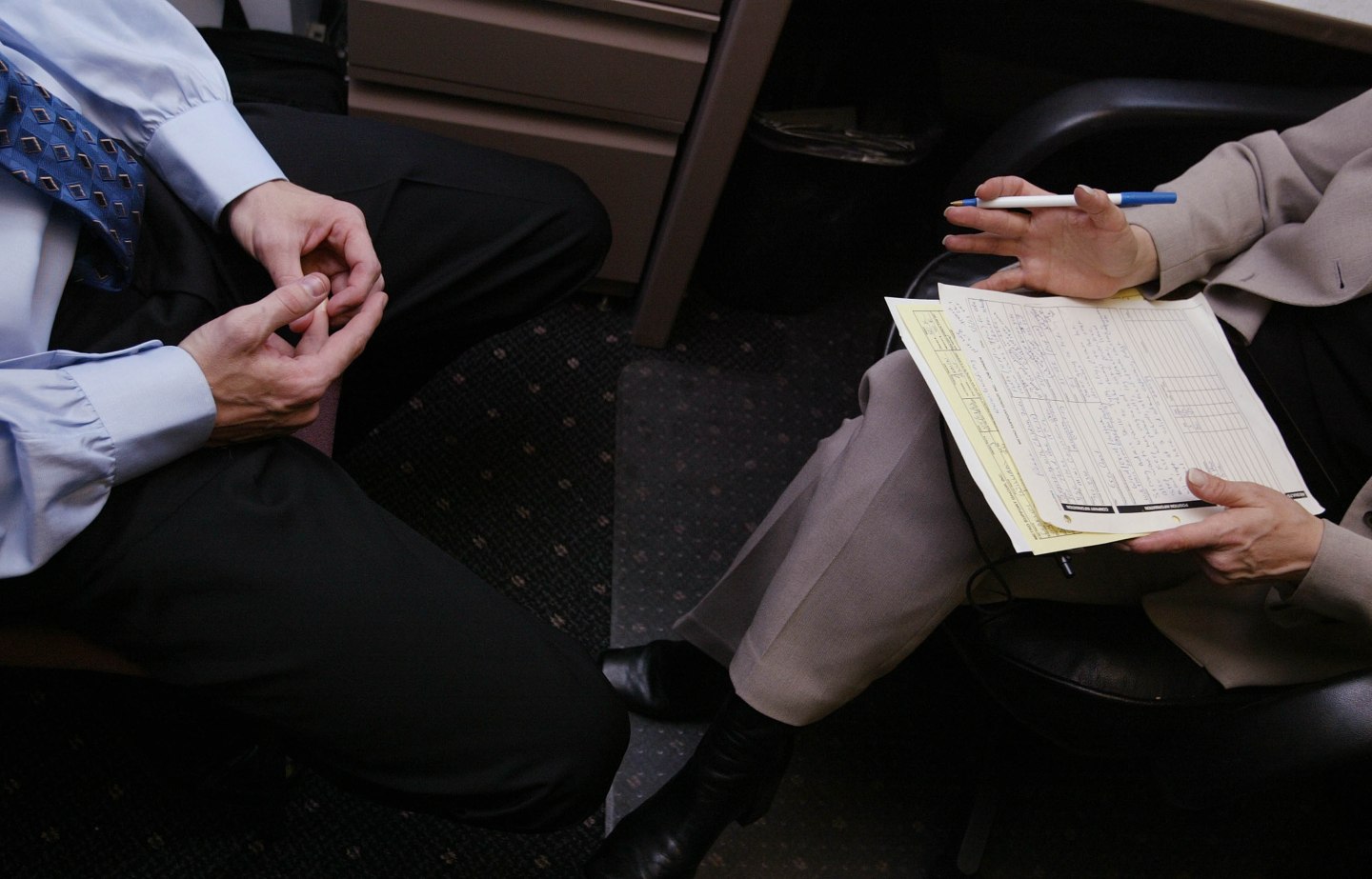 NEW YORK - MAY 7: A job applicant (L) speaks with recruiter Renee Chandler (R) during an interview May 7, 2003 at the offices of Metro Support Group in New York City. The nation's jobless rate climbed to six percent in April, rising for the third straight month, adding up to half a million lost jobs. New York's job market has especially been hit hard, with many applicants being unable to find work. (Photo by Chris Hondros/Getty Images)
Photograph by Chris Hondros via Getty Images

Dear Annie: Your recent article about changing careers after age 50 really hit home with me. At 54, I’ve been a senior manager in a couple of big ad agencies for the past 18 years. But before this, I loved doing the hands-on creative work — coming up with ideas, writing copy, shooting ads, and working directly with people like clients and videographers. I miss all that, and I’d like to go back to it, instead of leading and mentoring people who do it.

There’s just one problem, and it’s a big one. Job interviewers seem to doubt I’d be happy taking a step “down,” maybe because it would naturally involve a pay cut (which at this point I can well afford). Leaving my management experience off my resume altogether would create a huge gap. Any suggestions? — Not “Overqualified”

Dear N.O.: This is a little tricky, but it might be easier than you think. “With any objection you think an interviewer might have, including being ‘overqualified,’ always be the first to bring it up,” says Renee Lee Rosenberg. “Since you know they’re going to be thinking about it, address it directly and get it out of the way as soon as possible.”

A longtime career coach, Rosenberg wrote a book called Achieving the Good Life After 50: Tools and Resources for Making It Happen. She often advises people who want to go back to an earlier stage of their careers, especially managers like you who “loved working with clients, and now rarely see any.”

At the start of an interview, say something like, “You might be wondering why I’m interested in this job, after having been in management for so long.” Then describe exactly what it is that you miss about your old role, and what made you so good at it (which you clearly must have been, considering that you were — as so often happens, ironically —promoted beyond it).

Likewise, Rosenberg suggests tackling the pay issue head-on. “If there is a significant difference between your current compensation and what this job pays, acknowledge that. Explain that, at this stage of your career, it doesn’t matter to you,” she says. “But again, get the subject out in the open up front. Then quickly move on to talking about the great work you can do for this employer.”

This brings us to another reservation, most likely unspoken, that interviewers might have: How recent is your hands-on experience? After 18 years as a manager, might not your earlier talents be a little rusty?

Robert Hellmann, head of executive coaching firm Hellmann Consulting, has worked with some clients who have taken the radical step of leaving their management experience off their resumes, and out of the interview. That would leave, as you note, a “huge gap” — unless you fill it up with recent accomplishments.

“Take on some assignments in your current role that are usually the province of the people who report to you,” Hellmann says. “You want to be able to talk in detail about a project or two where you’ve used the skills required for your next job.”

If that’s too awkward where you work now, he adds, “don’t overlook volunteer work. It counts.” For instance, you could take on a project for a nonprofit, putting together a multimedia ad campaign or a social media strategy. Then, he says, put that under the heading of experience on your resume. “You can even put it right at the top, and leave off the word ‘volunteer.’ Whether or not you were paid for it is irrelevant anyway.”

At the same time, Hellmann recommends that anyone mulling any career change “get involved with a professional association in the field you’re planning to go into. Don’t just join, but be active, sign up for committees and meet as many people as you can.” He’s seen this lead many executives straight into their next job, because “people get to know you, and they see you in action, so what’s on your resume becomes an afterthought.”

Of course, there may be some job openings, especially at smaller firms, where being both a skilled practitioner and a seasoned manager is a real advantage. “Some people are good at both, and some roles require both,” notes Rosenberg. How much of your time you’ll spend wearing each hat “is something you can negotiate.”

One more thought: In each interview, “concentrate on telling why you loved what you are trying to get back to, with examples and stories that have nothing to do with the management experience that makes you ‘overqualified’,” says Hellmann. “You can steer the discussion the way you want it to go.”

That’s because, by his lights, any job interviewer only wants to know three things. “Will you be great at this job? Will you stick around? And will you fit in to the culture?” Hellmann says. “Any question they may ask you, they are really just trying to get at the answers to these three questions.”

Cover all three persuasively, and you won’t have to worry about seeming overqualified. “Hiring managers really want you to convince them,” says Hellmann, “so they don’t have to interview any more people.”

Talkback: If you’ve ever been hired for a job where you were “overqualified,” how did you do it? Leave a comment below.