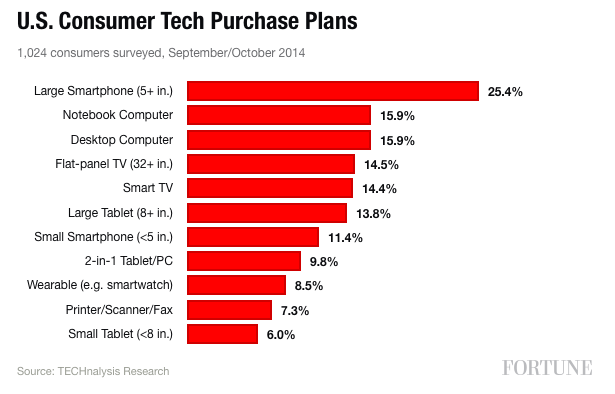 It’s hard to know what people are going to buy until they plunk their money down—but it doesn’t hurt to ask them.

The attached charts come from a survey of 3,012 individuals who own at least one PC, tablet, or smartphone—a demographic that is pretty close to the general population, says Bob O’Donnell, whose small analytics shop, TECHnalysis Research, ran the online poll.

The participants were asked which devices they expected to buy over the next 12 months. This is an imperfect proxy for what’s going to get purchased on Black Friday and Cyber Monday, but it’s the best we’ve got right now.

Note the difference between the U.S. results (above) and the worldwide results (below). Large smartphones and small computers are popular everywhere, but smart TVs and small smartphones seem like they’ll be more sought after in the U.K., Germany, Brazil, and China than in the U.S.

Just to complicate matters, Creative Strategies’ Ben Bajarin posted a similar survey yesterday on the same Techpinions site where O’Donnell published his. Bajarin’s “Hot Tech for the Holiday” survey was skewed toward more affluent consumers, and his sample seemed to be more interested in buying a wearable device (25%) than O’Donnell’s (8.5%).

But there’s one more thing is worth noting: In O’Donnell’s survey, the most popular answer in the U.S. and the second-most popular worldwide, was “none of the above.”

Is Black Friday dead? Watch the Fortune video below: