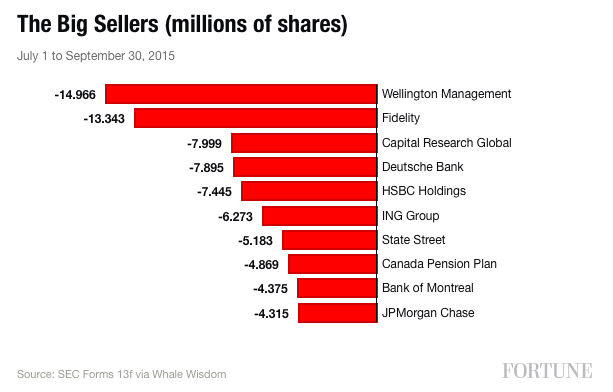 The biggest buyer of Apple last quarter—by far—was Apple itself, which bought and retired a record 131.7 million shares at anywhere from $112.94 to $124.66 each.

At those prices, there were plenty of sellers happy to unload the stock, and Apple closed the quarter at $109.83, down 11.7%.

The biggest sellers were Wellington Management and Fidelity, both based in Boston, which together dumped a total of 28 million shares worth $3.1 billion.

The biggest institutional buyer was a French bank, Société Générale, which gobbled up 24.5 million shares worth $2.7 billion.

The information comes from Whale Wisdom, an online service that assembles the information that funds with over $100,000 under management are required to file quarterly with the SEC. For the rest of the 361 days of the year, it bears repeating, these institutions are giant black holes.

According to Whale Wisdom’s Dan Collings, Apple topped his list once again—both in terms of the number of firms holding the stock (2,210) and in the value of their holdings ($358 billion). Overall, the number of Apple shares held by institutions in this period shrank by almost 3%.

According to Collins’ summary:

Below: The 10 biggest buyers, not including Apple.

Of the 15 funds with the most Apple in their portfolio, 10 reduced their holdings, four increased them and one (Carl Icahn) stood pat.

For more Fortune coverage of Apple, watch the video below.