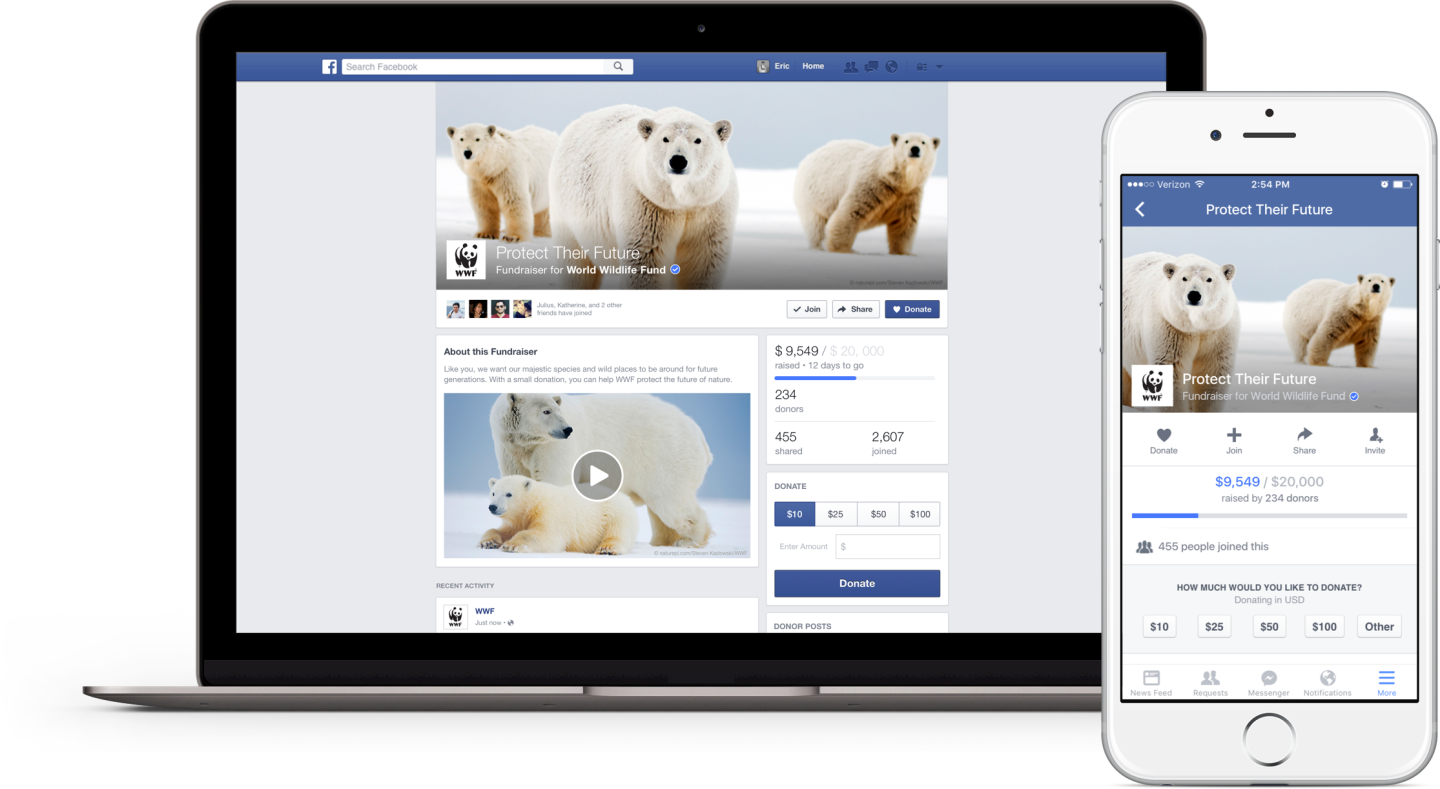 In the summer of 2014, the ALS Ice Bucket Challenge became arguably the most viral video campaign of all time, and it played out largely on Facebook. As the national ALS Association collected $115 million in donations—nearly six times its annual budget—440 million viewers on Facebook watched 17 million videos of participants dumping buckets of ice on their heads some 10 billion times.

Despite the staggering figures, leaders at Facebook believe that the social media phenomenon and the record-breaking sum of money collected by the ALS Association could have been even bigger.

That, in part, prompted the launch of Facebook’s new social good team and the introduction of new tools for non-profit organizations, which the social network rolled out on Wednesday: fundraisers and improved donate buttons.

Starting Wednesday, charities can launch a standalone fundraiser page—in addition to their general Facebook profile page—to promote special giving campaigns. A fundraiser page will serve as a dedicated place to collect and track donations for a specific collection effort.

Perhaps even more noteworthy are the new donate buttons, which non-profits can now add to pages and to posts that appear in their followers’ newsfeeds. Once users have entered their credit card information, the donate button will let users contribute to a charity through Facebook instead of having to navigate to an external donation site. What’s more, when a user donates, he can share the cause he gave to, and that post will feature a donate button too.

During the ALS Ice Bucket campaign in 2014, Facebook users who wanted to donate to the cause had to do so through the ALS Association website or by mailing the organization a check. “It’s cool to think about the ALS campaign if we had had these products,” Gleit says.

Facebook introduced an earlier version of the donate button in 2013 to select non-profit partners like the American Red Cross and the World Wildlife Fund. And in August, it introduced a call-to-action donate button for other non-profits that sends users to external donation pages.

Unlike the previous versions, the donate button Facebook introduced Wednesday will eventually be available to all U.S.-based non-profit organizations—allowing them to take donations directly through Facebook—and it will be shareable in newsfeeds.

The initial roll out of the new tools will include 37 non-profits, such as the World Wildlife Fund, Mercy Corps, and the National Multiple Sclerosis Society, which Facebook enlisted as “beta partners.” Gleit says the company selected those charities based on existing relationships and the non-profits’ tech savviness. Its initial partners will be exempt from credit card processing charges, but Facebook will institute a fee sometime next year, though the company would not disclose how much it will be.

Whatever the fee amount, Facebook does not intend to make a profit by processing charitable donations, Gleit says. The processing fee is intended to cover the expense of accepting credit card transactions and Facebook’s operating costs. “Our fee will be exactly what it [takes] to cover our costs,” she says, adding that the surcharge will be “at industry standards” or less. Graham McReynolds, chief marketing and development officer at the National MS Society, said that per-transaction fees on online donations tend to be in the 3-5% range.

Facebook stores users’ credit card information, which will make repeat donations that much easier. (The company would not disclose how many of its 1.55 billion users have credit cards on file.)

Facebook’s ultimate goal is to makes its new tools available to all U.S.-based organizations with the 501(c)(3) tax designation for non-profits. In the non-profit space, there are several watchdog groups such as Charity Navigator and Charity Watch that rate non-profits based on how they spend their donations, but Gleit says Facebook doesn’t yet have the infrastructure to vet non-profits (though they say they’re working on it) and will simply rely on the 501(c)(3) status as its barrier to entry.

As a corporation, Facebook has actively supported causes like gay marriage, but opening its features up to all non-profits means the social network won’t pick and choose charities based on their political leanings. Some charities will align with Facebook’s stances, Gleit says, and others will not.

Non-profits have long had a presence on Facebook, and it has proved a successful platform for reaching supporters and disseminating information—but not necessarily for fundraising, says Thad Calabrese, professor of public and nonprofit financial management at New York University.

A 2013 report from fundraising software company Blackbaud found that roughly 1% of all online fundraising came from social media.

“Our experience as a non-profit has been that social media [is] a more challenging space to fundraise in—not to engage in—but to get [supporters] to actively fundraise,” says the National MS Society’s McReynolds. The organization had an app plug-in for Facebook that allowed supporters to raise money on the site, but McReynolds says it was too clunky. He says that making giving a simpler process could improve social media’s fundraising potential.

McReynolds sees the most promise in the new Facebook feature that allows donate buttons to appear in posts that pop into users’ newsfeeds. His organization has learned that people on Facebook “engage through a newsfeed,” not through a non-profit’s page. “We think that’s a huge step forward,” he says.

An open question for McReynolds’ is how donors’ information will be shared with charities when they give through Facebook. The social network’s new tools make it easy to solicit and receive donations, McReynolds says, but he’s still unsure how the National MS Society will turn those gifts into “lifelong” relationships. “We don’t know who to thank,” he says, “or who to ask if they want to learn more or volunteer or if they’re good where they are.” He says the National MS Society has had a “very open and collaborative relationship with Facebook,” but he’s still waiting for answers to these questions.

A Facebook spokesperson told Fortune that whether charities receive a donor’s personal information is entirely up to the donor. When users make a donation on Facebook, they will have the option to share their email address with the charity.

Patrick Rooney, associate dean for academic affairs at the Lilly Family School of Philanthropy at Indiana University, had the same hang up. “Anything that makes it easier and more convenient to give is probably a good thing,” he says. “The trickier part is knowing what happens in the back end—how quickly do [non-profits] find out who’s giving, acknowledge that gift, and steward that gift?”