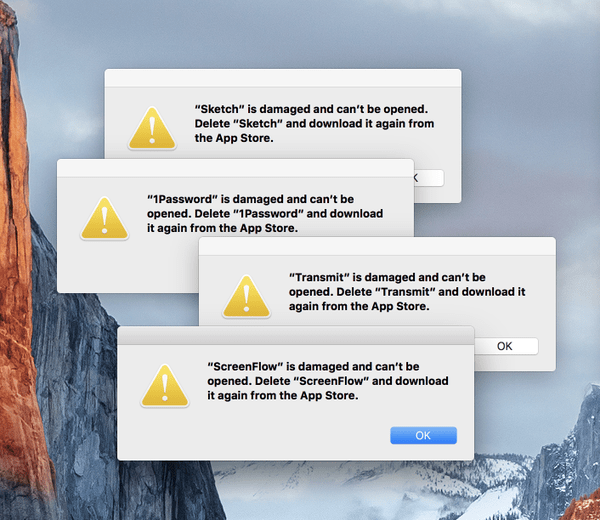 If you tried to launch an app on your Mac after 5 pm ET Wednesday and were greeted with a scary error message, you are not alone. What Computerworld called a “massive app fiasco” affected Apple users around the world.

This is what I saw Thursday morning when I tried to check into Twitter (TWTR).

“Tweetbot” is damaged and can’t be opened. Delete “Tweetbot” and download it again from the App Store.

The problem was quickly identified—as it happens, by one of Tweetbot’s creators. A security certificate Apple installed to protect users from malware had expired on Nov. 11, 21:58:01 GMT—precisely five years after its original creation—and nobody at Apple had thought to renew it.

The company fixed the problem—pushing through a new certificate that expires in 2035—but not before breaking untold numbers of Mac apps and confusing and inconveniencing countless Mac owners. The only way I could get Tweetbot working again was to log back into the App Store, remember my password, re-install something I had already bought and paid for, and re-boot my computer.

“The Mac App Store is supposed to make things easier, but it’s also a single point of failure,” says app developer Michael Tsai, who woke up Thursday to an inbox full of e-mails from customers reporting that his apps wouldn’t launch. “Not only is it neglected, but sometimes even the existing functionality stops working.”

Developers have long complained about the second-rate treatment they receive from the teams that run Apple’s app stores—both for iOS and especially for Mac OS.

The incident exposed users to the reality that Apple is sometimes better at creating new products than it is at maintaining the ones it has.