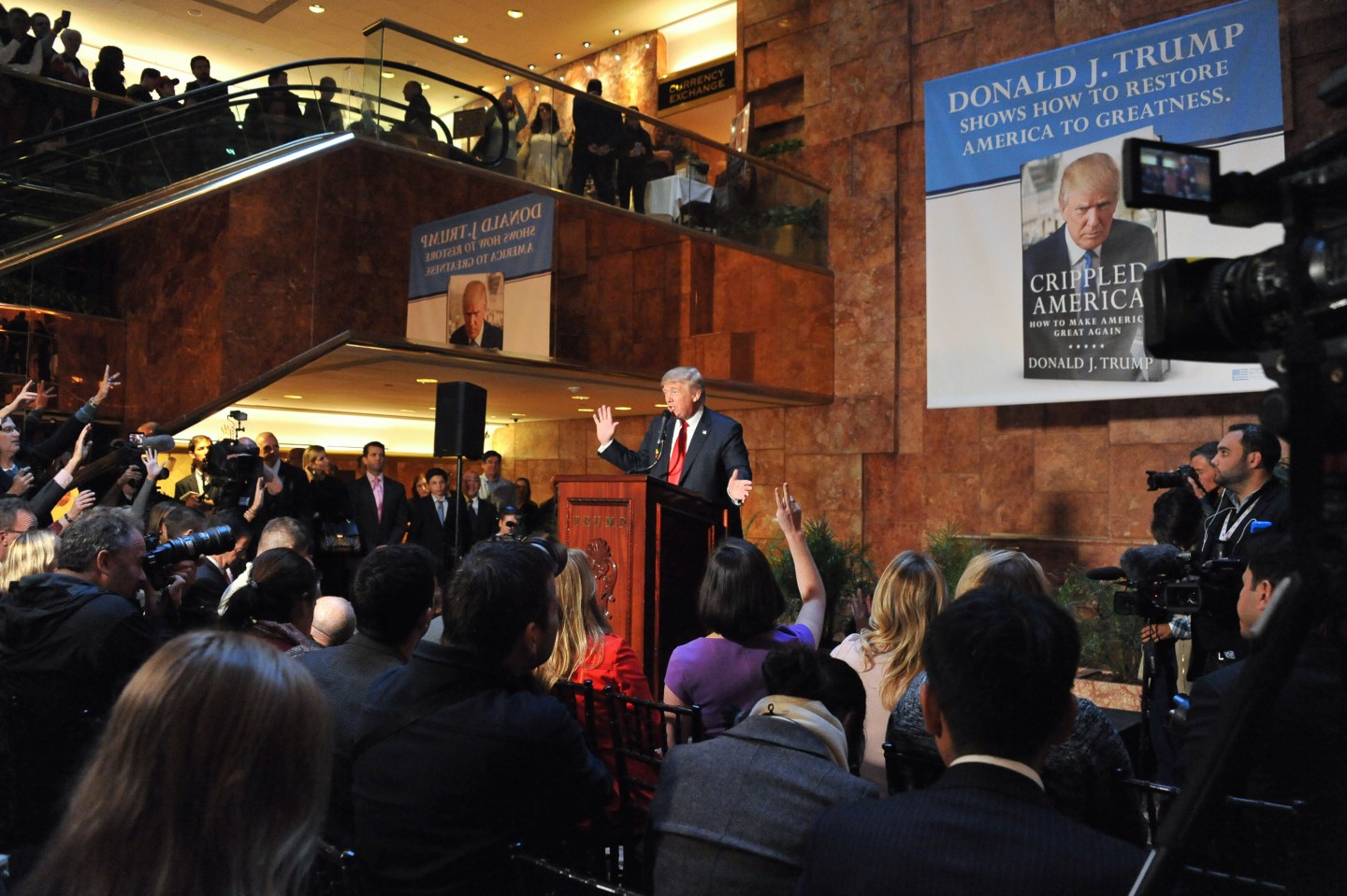 “Donald’s the best!” yelled an adoring fan beside me as I pushed my way closer to Donald Trump at his book signing at Trump Tower in New York City on Tuesday. Trump was singing copies of his latest book, Crippled America: How to Make America Great Again, which was released today.

A Fortune contingent went to check out the event — along with hundreds of supporters, spectators and media who clamored together in the luxury building to catch a glimpse of The Donald. And, no, we didn’t get the Fortune copy signed, sadly.

“Look at the state of the world right now,” said Trump in a statement with an advance copy of his book. “It’s a terrible mess, and that’s putting it mildly.”

“It’s time to bring America back to its rightful owners—the American people,” he added.

The book features the media and real estate mogul, who continues to be near the top of the pack for the Republican nominee for President, scowling harshly on the cover. “Some readers may be wondering why the picture we used on the cover of this book is so angry and so mean looking,” he begins the 190-page tome, which is published by Simon & Schuster. “I had some beautiful pictures taken in which I had a big smile on my face.”

“But I decided it wasn’t appropriate,” he continues, “In this book we’re talking about Crippled America.” And that pretty much sets the tone.

Join me today, Nov 3rd, in #TrumpTowerNYC at noon. I'll be signing copies of my new book CRIPPLED AMERICA. Don't miss it!

In person, Trump looked just as dour as he took questions from media. But the energy of the place was addicting. The tension was palpable as people shoved to get a better angle to see the man who’s electrified the race for Commander-in-Chief. There were men in business suits, women clutching copies of the book, and even a few kids donning “Make America Great Again” hats.

How does @realDonaldTrump feel about Europeans? @FortuneMagazine pic.twitter.com/L2zsK0GQGr

“Trump for President!” said one spectator to my right.

“Donald’s number one, baby!” screamed a third with what sounded like a thick New York accent.

And to those attending the book signing and for many other Americans, he is.

Because I had to ask @realDonaldTrump for hair advice. pic.twitter.com/YdVJpMFjUX

Donald Trump waves and walks to his book signing table to launch his new book ‘Crippled America: How to Make America Great Again’ at Trump Tower on November 3, 2015 in New York.Photograph by Kacy Burdette for Fortune

“Make America Great Again” hats for sale at Trump’s book signing at the Trump Tower on November 3, 2015 in New York.Photograph by Kacy Burdette for Fortune

Trump Tower crowded with people waiting to get their book signed.Photograph by Kacy Burdette for Fortune